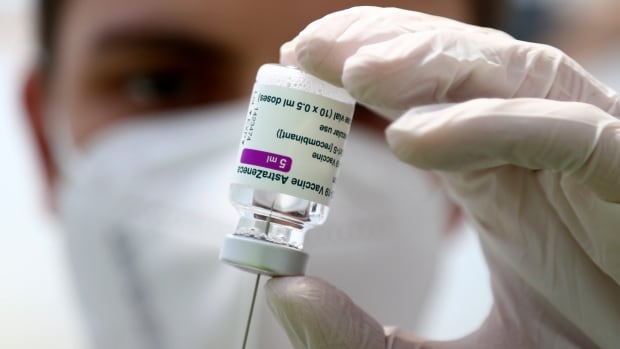 Starting this weekend, youths aged 12 and over in Ontario are eligible to receive a COVID-19 vaccine.

As of 8 a.m. Sunday, that age group will be eligible to schedule an appointment through the provincial booking system and call centre, as well as at select pharmacies, according to a news release issued Friday evening.

To book an appointment online, individuals must already be 12 years old as of the date of their booking.

People who are not 12 years old come Sunday can book an appointment for a later date through the provincial call centre or directly through public health units that use their own booking system.

The Pfizer shot is the only COVID-19 vaccine that has been authorized for use in individuals aged 12 and over.

Ontario is moving ahead with providing a second dose of the AstraZeneca COVID-19 vaccine to some who received a first shot. The province is also lowering restrictions around long-term care home visits and splash pads.

Ontarians who got a first dose of the AstraZeneca vaccine between March 10 and March 19 may opt to receive a second one at a 10-week interval during the week of May 24, the province announced Friday.

That period encapsulates a pilot project that saw the province’s first doses of AstraZeneca administered through pharmacies in Toronto, Kingston and Windsor, as well as via primary care providers in some regions.

Those interested in getting a second shot at the 10-week interval should reach out to the pharmacy or primary care physician who provided their first dose, the province said in a news release. Those pharmacies and doctors will also try to contact eligible people.

Research suggests that a second shot of the AstraZeneca vaccine is most effective at 12 weeks, but Ontario currently has about 55,000 doses that are set to expire on May 31.

The revised plan was detailed by Dr. David Williams, Ontario’s chief medical officer of health, and Dr. Dirk Huyer, co-ordinator of the provincial outbreak response, at a morning briefing. The news came as the Ministry of Health said that a new record-high 158,524 doses of COVID-19 vaccines were administered in the province yesterday.

Williams and Huyer stressed that the AstraZeneca vaccine is safe and still relatively effective at a 10-week interval, with immunity approaching the level provided by mRNA vaccines like Pfizer and Moderna within a few weeks of a second shot.

“The risk of getting COVID still far exceeds any risk associated with the AstraZeneca vaccine,” Williams said.

As for those who got a first dose after March 19, the province is still finalizing plans for their second shot, Williams said. A strategy will be ready before the 12-week interval when the majority of people who got an Astrazeneca shot become due for another dose.

“When the time comes to receive a second dose, everyone who received a first dose of AstraZeneca will receive either an AstraZeneca or mRNA vaccine for their second dose,” Williams said.

Nearly one million people in Ontario received a first shot before the province, on May 11,  pushed pause on administering any further doses over concerns about rare but potentially fatal blood cots.

Williams and Huyer said they were considering options for what to do with the additional doses coming. They said they were closely watching results from the United Kingdom, where researchers are studying the implications of mixing the AstraZeneca vaccine with mRNA vaccines made by Pfizer and Moderna.

Williams said that the province believes mixing vaccines to be safe, but it is awaiting updated guidance from the National Advisory Council on Immunization (NACI).

Health Minister Christine Elliott said Thursday that Ontario is ready to get the AstraZeneca doses into arms.

“We are waiting for the final recommendations (from experts) on what we should do with the AstraZeneca vaccine,” Elliott said.

“Data from the U.K. indicate that any problems with the second shot are far less,” she said.

The risk of a blood clot from a first dose of the AstraZeneca vaccine is estimated to be roughly one in 55,000. The risk for a second shot is about one in about 600,000, Williams said today.

Justin Bates, head of the Ontario Pharmacists Association, said the organization supports using all of the available doses of AstraZeneca.

Bates said it would take a concerted effort to get the shots in arms before expiry. Patients would also need to provide informed consent around dosage intervals and relative risks, which he said were far outweighed by the potential benefits.

The seven-day average for cases, which helps smooth out spikes and lulls in the data, now stands at 2,064, which is the lowest it has been since March 28.

Due to the cyclical nature of testing throughout the week in the province, it’s generally better to compare the same day with previous weeks to get a sense of how the pandemic is changing.

By that metric, cases are dropping at an encouraging rate, down from 2,382 last Friday.

Labs completed 37,126 tests, the fewest reported on a Friday since September, and Public Health Ontario logged a provincewide positivity rate of 5.4

Testing levels on the whole have fallen in recent weeks, though so too have positivity rates.

The total number of patients in hospitals with COVID-related illnesses continued its steady drop to 1,265,55 fewer than the day before. The number of people in intensive care also decreased by six, down to 715.

The number of patients that required a ventilator, however, jumped by 17. As of yesterday, there were 510, or about 71 per cent of all patients in ICUs, who were vented.

The province’s calculation of the effective reproduction number, which measures how many people one person with the virus would go on to infect, stands at 0.86. That figure has to stay below one for spread of the virus to continue to slow.

In total, 7,735,148 doses of COVID-19 vaccines have been administered so far in Ontario. Nearly 59 per cent of Ontarians 16 and older have had at least one dose.

Announcing the provincial government’s new three-phase reopening plan yesterday, officials said that at least 60 per cent of adults would need to have a first dose before moving forward into phase one, among other important thresholds.

Alongside those changes, the Ministry of Long-Term care is also relaxing some restrictions in long-term care homes starting this weekend.

In a letter to the province’s long-term care homes obtained by CBC News, Associate Deputy Minister Erin Hannah said the the ministry is moving forward to allow family members and friends to visit loved ones in facilities across Ontario as of May 22.

“This means that effective tomorrow, general visitors can come to LTC homes to see their loved ones for an outdoor visit,” Hannah wrote.

There are some stipulations that come with that directive, including:

The province also announced Friday that splash/spray pads, like other outdoor recreation amenities, will be allowed to open as of 12:01 a.m. on May 22.

Pushback for lack of clarity on school reopening

Ontario’s government is facing criticism from doctors and teachers alike for failing to say if and when classrooms will reopen this school year.

The Canadian Paediatric Society says the province must prioritize reopening schools for the sake of children’s mental health.

The national organization of pediatricians says even a few weeks in the classroom will be beneficial for children who have been starved of socialization.

The province’s three-stage reopening plan, unveiled on Thursday, will see some non-essential retailers open their doors around mid-June, but offers no plan for sending kids back to class.

The union that represents the province’s high school teachers wants Premier Doug Ford’s government to be a little more transparent.

Harvey Bischof, president of the Ontario Secondary School Teachers’ Federation, says he’d like to see the criteria the province is using to decide whether it’s safe for schools to reopen.

For his part, he says he believes the province should take a regional approach to reopening, as the rate of COVID-19 varies by location.

The province’s chief medical officer says the province is in the tricky situation of trying to balance the risk reopening might have on the spread of COVID-19 with the mental health of students.

Students have been learning remotely since schools closed after the spring break in April, more than a month ago.