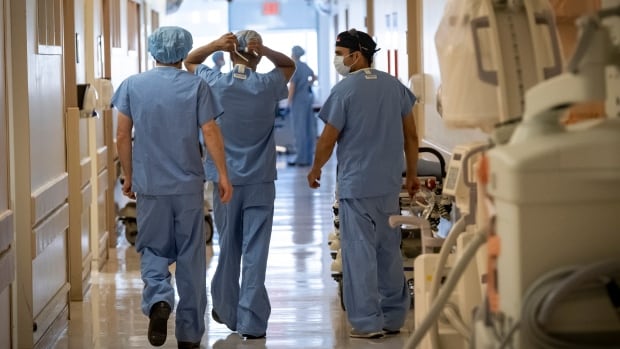 Ontario reported another 1,890 cases of COVID-19 and 28 more deaths linked to the illness on Wednesday as hospitals in one of its hardest-hit regions warn they are reaching a critical point in novel coronavirus admissions.

The newly confirmed cases include 517 in Toronto, 471 in Peel Region and 187 in York Region — where hospital CEOs said this morning that their facilities have reached a “tipping point” in COVID-19 admissions.

A joint statement from the CEOs of Mackenzie Health, Markham Stouffville Hospital and Southlake Regional Health Centre highlights a “significant increase” in admissions due to the novel coronavirus in recent weeks.

The group said they are concerned that the trend could impact access to other health care, like scheduled surgeries. They also called on residents to wear masks in public and forgo gathering over the holidays in order to protect the community.

York is currently in the red level of the province’s pandemic response framework, but a lockdown could be coming, according to Dr. Karim Kurji, the region’s medical officer of health.

Kurji said this morning there is no doubt hospitals in the region are under increasing stress and said he has been in close communication with Dr. David Williams, his provincial counterpart.

“Based on those discussions, it seems we are heading toward a lockdown, given the metrics last week, in particular, were not very good from York Region’s standpoint,” he said, adding that a spike in daily case numbers may be attributable to the “shopping frenzy” that happened in the days before Toronto and Peel Region entered lockdown.

That said, Kurji continued, local modelling suggests that lockdown measures may not have a significant impact on the spread of the virus, given the restrictions already in place and the region’s enhanced enforcement initiative that began about two weeks ago.

In a statement, Markham Mayor Frank Scarpitti asked that the province consider certain adjustments — such as switching big box stores and retail centres to curbside pickup only — before moving York into lockdown.

Other public health units that saw double-digit increases in today’s update were:

(Note: All of the figures used for new cases in this story are found on the Ontario health ministry’s COVID-19 dashboard or in its daily epidemiologic summary. The number of cases for any region may differ from what is reported by the local public health unit because local units report figures at different times.)

The Ministry of Education also reported 207 cases that are school-related: 174 students and 33 staff members. Some 866 of Ontario’s 4,828 publicly-funded schools, or nearly 18 per cent, have at least one case of COVID-19, while 11 schools are currently closed because of the illness.

The new cases today push the seven-day average to 1,840, a new record high.

There are now 16,089 confirmed, active cases of COVID-19 provincewide, a slight drop from yesterday’s high.

They come as Ontario’s network of labs processed 48,456 test samples for the novel coronavirus and reported a test positivity rate of 4.4 per cent. Another 54,613 tests are in the queue waiting to be completed.

Further, the number of people in Ontario hospitals with confirmed infections climbed to 811. Of those, 221 are being treated in intensive care and 129 require the use of a ventilator.

Meanwhile, for a second day in a row, Premier Doug Ford is not scheduled to take any questions from media. Throughout the COVID-19 pandemic, Ford has typically made himself and often top cabinet ministers available to answer queries from reporters.

Yesterday, the Ontario legislature adjourned for the holidays earlier than expected and lawmakers wont return until mid-February.

Speaking this morning, NDP Leader Andrea Horwath called on Ford to recall the legislature and accused him of “calling it quits.

“He’s throwing in the towel. He’s waving the white flag in the fight against COVID-19 and just waiting for a vaccine now,” she said.

Not long after Horwath made her comments, Health Canada announced that it has approved the Pfizer-BioNTech COVID-19 vaccine for immediate use after a two-month review of the company’s clinical trial data. Up to 249,000 doses are expected to arrive in Canada by year’s end.

Retired general Rick Hillier, the head of Ontario’s vaccine task force, said Wednesday that he expects about 85,000 of the initial doses to ship to the province in the coming weeks. That delivery will serve as a sort of trial run, allowing the task force to work out kinks in the distribution system, he said.

Because the vaccine must be stored at between –80 C and –60 C, there will be significant logistical challenges during the first phase of Ontario’s immunization campaign.

“There are going to be bumps in the road. Things will go wrong,” Hillier told CBC Radio’s Metro Morning.

Premier Ford has said Ontario is gnawing at the bit for a COVID vaccine. So what is the plan to get it to patients, especially the most vulnerable? A conversation with the chair of our vaccine distribution task force, Retired General Rick Hillier. 10:03

Vulnerable populations like long-term care residents and front-line workers will be among the first in line to get the vaccine. Hillier said he anticipates it will take about three to four months to finish immunizing those priority groups, before the vaccine will become more widely available to the public.

Ford also issued a statement, calling the development “phenomenal news for all Canadians,” saying Ontario will be ready to distribute and administer the vaccines as soon as they arrive in the province.

“Friends, the light at the end of the tunnel grows brighter,” he said.