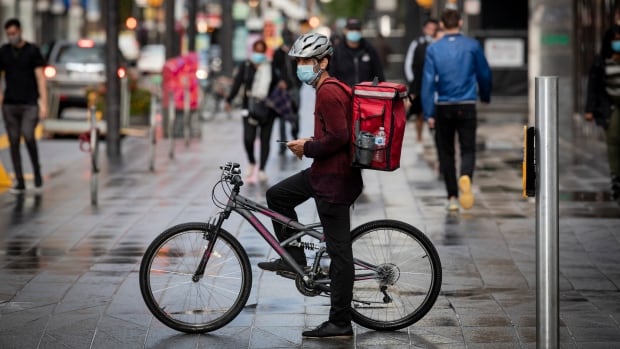 Ontario reported 827 more cases of COVID-19 on Tuesday, while the province’s labs processed fewer than 24,000 tests — about half of their daily capacity.

Meanwhile, the seven-day average of new daily cases, a measure that limits noise in the data and provides a clearer picture of longer-term trends, increased slightly up to about 879, another record high. Compared to the previous five days, the rate of increase slowed considerably.

The new case numbers come after a record-breaking weekend and seven-day average, which health officials said was partially to blame on Thanksgiving and other large gatherings.

As for testing levels, Ontario currently has laboratory capacity for about 45,000 tests daily. Fewer than 30,000 tests were completed on each of the last two days.

The province recently moved to limit tests for asymptomatic people, reserving them instead for those with symptoms or who had exposure to someone with a confirmed case.

A Ministry of Health official told CBC News that since testing is demand driven, the numbers typically dip earlier in the week with fewer people booking appointments to be tested on the weekend.

Health Minister Christine Elliott added that the province has identified areas in Toronto and Peel Region for mobile or pop-up testing but provided no specific details about when and where that may happen.

The relatively low number of tests has pushed the province-wide positivity rate to about 3.45 per cent, also a new high. Provincial health officials have previously said that a 2.5 per cent positivity rate is reason for serious concern.

Meanwhile, the number of people in Ontario hospitals with confirmed cases of COVID-19 climbed above 300 for the first time during the resurgence of the illness that began in early August and continues today. More than 1,000 were hospitalized during the first wave of the pandemic in the spring.

Of 312 people currently in hospital, 75 are being treated in intensive care and 52 are on ventilators.

On Tuesday, Ford announced an investment of $116 million to increase hospital capacity by 766 beds across the province. The new beds are in addition to the 139 critical care beds and up to 1,349 hospital beds announced as part of the province’s fall preparedness plan, Elliott said.

The province is also reporting 691 more resolved cases, and an additional four deaths, bringing the total death toll to 3,103.

Experts and officials have been warning about so-called “pandemic fatigue” for months, in which people who are sick of following the rules embrace riskier behaviour in order to see friends and family or do beloved activities.

Dr. Isaac Bogoch, an infectious disease specialist at Toronto General Hospital, told CBC on Tuesday that with a long winter ahead, it remains a major concern.

What’s needed, he said, is “messaging of how you can create safer spaces so people can do the things that they like to do, stay physically active, connect with others, enjoy themselves.”

Another Toronto hospital has declared a COVID-19 outbreak after two staff members in its surgical program tested positive for the virus.

North York General Hospital says both cases appear to be linked, and it will postpone non-emergency surgeries for the time being to limit the risk of infection.

The hospital says there are no patient cases connected to the outbreak so far.

Several other hospitals have been dealing with outbreaks of the novel coronavirus, which are generally defined as at least two health-care-related cases within a 14-day period.

Nurses and personal support workers can now be granted anonymity when testifying for a commission examining Ontario’s response to COVID-19 in long-term care homes.

Long-term Care Minister Merrilee Fullerton says the government has changed the terms of reference for the independent inquiry to ensure the workers don’t fear reprisal from their employers.

Opposition critics called the move a good start, saying whistle-blower protections should be strengthened across the sector.

The commission is investigating how the novel coronavirus spread in the long-term care system and will submit its final report on April 30, 2021.

In interim recommendations issued late last week, the commission said the province must address critical staffing shortages at long-term care homes as the second wave of the pandemic intensifies.