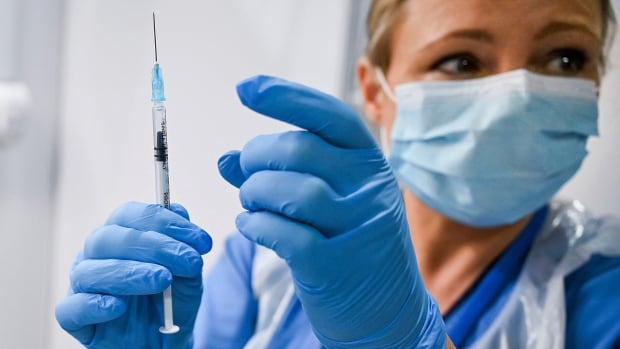 Ontario will administer its first COVID-19 vaccines next Tuesday at two hospitals in Toronto and Ottawa, the province confirmed Thursday as it recorded a record high number of new daily cases.

The first vaccines will go to health-care workers at long-term care homes and other high-risk places, Premier Doug Ford said in a news release.

More details are set to be provided on Friday, Ford’s statement said.

Toronto has been hard hit during the first and second wave of the COVID-19 pandemic. Ottawa, which recorded just 56 new cases on Thursday, was selected in part to “test and validate provincial distribution networks, as well as in recognition of the challenges the region has faced with certain long-term care home outbreaks,” the premier said.

(Note: All of the figures used for new cases in this story are found on the Ontario Health Ministry’s COVID-19 dashboard or in its daily epidemiologic summary. The number of cases for any region may differ from what is reported by the local public health unit because local units report figures at different times.)

The Ministry of Education also reported 139 new cases that are school-related: 111 students and 28 staff members. Some 878 of Ontario’s 4,828 publicly funded schools, or about 18.2 per cent, have at least one case of COVID-19, while 10 schools are currently closed because of the illness.

The new cases push the seven-day average to 1,862, the highest it has been since the first instance of COVID-19 was reported in Ontario in late January.

There are currently 16,233 confirmed, active infections of the novel coronavirus province-wide, the most at any point during the pandemic.

They come as Ontario’s network of labs processed 61,809 test samples for the novel coronavirus — the most on a single day by a considerable margin — and reported a test positivity rate of 3.6 per cent. Another 66,326 test samples are in the queue waiting to be analyzed.

Furthermore, hospitalization figures all hit second-wave highs in today’s update. There are now 829 patients with cases of COVID-19 in Ontario hospitals. Of those, 228 are being treated in intensive care units, while 132 people require the use of a ventilator.

For a third straight day, Premier Doug Ford is not scheduled to take any questions from media. Throughout the COVID-19 pandemic, Ford has typically made himself and often top cabinet ministers available to answer queries from reporters.

In a story published this morning, CTV News reported that Ford’s office said he would no longer be doing daily news conferences, opting instead to face media only when he “has an update for Ontarians.”

CBC News reached out to Ford’s office for confirmation, but the premier’s spokesperson declined to directly answer the query, saying only that Ford would be attending the first ministers meeting with Prime Minister Justin Trudeau later today.

Earlier this week, the Ontario legislature adjourned for the holidays earlier than expected and lawmakers won’t return until mid-February, meaning the government will not face public questioning from the opposition parties until then.

Ontario’s current lockdown measures have not had nearly as much of an impact on people’s mobility — and therefore likely their contacts — as it did during the first wave of the pandemic, new provincial figures released Thursday show.

According to the latest provincial modelling, relaxation of current public health interventions would likely lead to even higher case growth.

“There is a lot of people on the move. We have to get that down and limit that somehow,” said Dr. David Williams, Ontario’s chief medical officer of health. Williams said he will be recommending some parts of Ontario move up in the province’s colour-coded framework, with announcements coming Friday.

Adalsteinn Brown, dean of the University of Toronto’s Dalla Lana School of Public Health and co-chair of Ontario’s COVID-19 science advisory table, said Ontario’s control over the pandemic remains “precarious” at the moment.

The figures show that cases continue to grow while per cent positivity looks to be flattening. “This is a small bit of good news,” Brown said, though he added that the impact of the pandemic still varies “widely” across, and even within, public health units.

Modelling shows that mortality, both in long-term care and overall, continues to increase, and may top 25 deaths a day within a month. That number may seem small, Brown said, but it is significant enough to “put it among the most important causes of death in the province on a daily basis,” he said.

ICU occupancy, meanwhile, will likely continue to stay above 200 beds for the next month and might go higher, especially if public health measures are relaxed. This also means access to care deficits will persist, according to the province — meaning some medical procedures will be pushed off.

You can read the new projections in detail for yourself here:

A hospital network in Mississauga in Peel Region has closed some of its units to admissions after 36 staff members tested positive for COVID-19.

Trillium Health Partners said all three of its facilities are experiencing outbreaks, which have also sickened 10 patients.

The outbreaks include the Credit Valley Hospital’s emergency department and medicine unit, as well the Mississauga Hospital’s cardiac surgical ICU and another unit.

The outbreaks also include two floors at Queensway Health Care in Toronto.

All affected staff are isolating at home, a spokesperson for the health network said.