Obtaining the Campaigns list from the server has failed!
Server response:
CM Ad cahger Server plugin is not active on https://legendarygroup.co/admanager/
You Are Here Home Health News Ontario requires mandatory vaccines for students against nine illnesses, but says it won’t for COVID-19 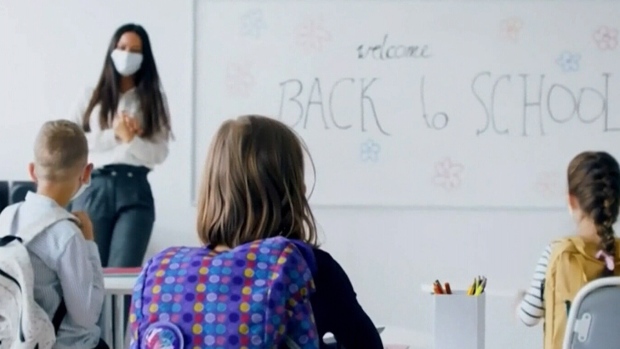 TORONTO — The Ontario government says they won’t force students to be immunized against COVID-19 because they “respect the choices individuals will make” despite already requiring children to be vaccinated against nine other illnesses.

Unless a student has a valid exemption, children in Ontario who attend primary or secondary school must be immunized against diphtheria, tetanus, polio, measles, mumps rubella, meningitis, whooping cough and chickenpox.

“Children who do not get immunized are at increased risk of disease,” the government website says. “They may be removed from school during a disease outbreak.”

Despite not clearly stating why, the Ontario government has remained firm in stating the COVID-19 vaccine won’t be added to this list.

Chief Medical Officer of Health Dr. Kieran Moore said Wednesday that the province won’t even be informed of a child’s COVID-19 immunization status when students return to the classroom in September.

“There shouldn’t be any barriers or stigmatization of children who have not received a vaccine in any way,” he said.

Toronto-based infectious disease specialist Dr. Isaac Bogoch says there may be a variety of reasons as to why the government is leaving COVID-19 vaccines off the list of required inoculations.

He said part of it could be for political reasons, and that the government might also be waiting “for more highway miles with these vaccine.”

“We know that there certainly is a low, but not zero per cent chance of myocarditis with the vaccines, that’s the inflammation of the heart, and even though it’s rare, it’s more common in younger populations,” Bogoch said.

“I think if we look at what’s happening now and we appreciate there are no mandates for this vaccines in schools, and we fast forward, I’m just going to make up a number here, a year, two years, three years, I would imagine at some point in the future when we have more highway miles with this vaccine, when we have tremendous amount of data with the safety and efficacy of these vaccines, I wouldn’t be surprised if it was added to the list of vaccines required.”

CTV News Toronto reached out to the government to clarify why the COVID-19 would not be required while other vaccines are, but was told to refer to the comments made by Education Minister Stephen Lecce earlier on Wednesday.

Those comments referred to respecting the individual choices of parents and students, but did not explain what the difference is between COVID-19 and the illnesses students are already required to be vaccinated against.