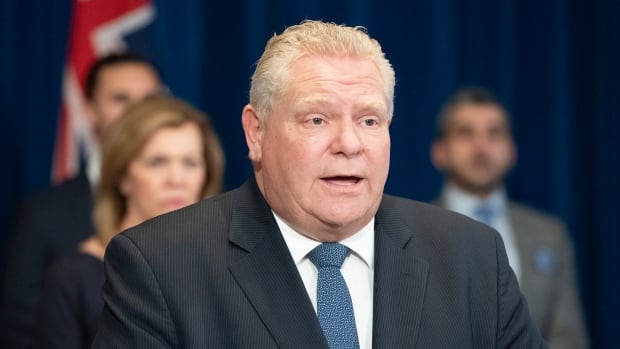 Ontario’s first stage of economic recovery will include resuming construction projects, the reopening of some workplaces, seasonal activities and healthcare settings — but if you’re looking to find out when schools or day cares might reopen or when you can expand your social bubble, you won’t find the details in today’s plan.

Starting May 19, retail stores outside of shopping malls with street entrances can begin reopening with physical distancing measures. Outdoor recreational activities and many individual sport competitions will also get the green light starting Tuesday.

The first stage also involves the “gradually restarting” scheduled surgeries, along with allowing libraries to open for pickup, and allowing property management services, such as cleaning, painting and pool maintenance, to resume.

“Businesses should open only if they’re ready,” Ontario Premier Doug Ford warned, before adding the province will be watching the COVID-19 case numbers like a hawk. “We cannot let our guard down now.”

Stage one of the province’s reopening plan will see workplaces gradually begin to reopen “but working from home should continue as much as possible.”

As for when the next stage of the recovery plan might begin, “there is no timeframe” on that, the premier said.

And on the question of how the province might change course if the number of COVID-19 cases spike, Ford said,  “We always go by the advice of our chief medical officer.”

Just ahead of the holiday weekend, Ontario Premier Doug Ford says the  province is lifting some restrictions in areas such as retail, recreation and construction. 3:47

Health Minister Christine Elliott was also asked about when Ontarians can expect to expand their physical contact beyond their own households.

“We don’t have the final answer yet, but we are studying it,” she said, adding the province is also looking at when religious settings might be able to resume regular operations.

Ford also warned restaurants will need to remain closed for the time being, and will be limited to takeout for now.

“It’s an area that people want, especially restaurant owners … but again we’re going to have to get the approval of the chief medical officer and the health team before we move forward,” Ford said.

Meanwhile, Elliott said the province will now expand its testing guidelines for COVID-19. The province reported 258 additional cases, the fewest new cases in a single day since March 29.

In a series of tweets Thursday morning, Christine Elliott said that the revised guidelines will allow for “anyone with symptoms” to get a test.

“Doing so will help identify and contain new cases and monitor any shifts in community spread to keep Ontarians safe,” she continued.

So far, Ontario has prioritized testing the province’s approximately 70,000 residents of its 630 long-term care homes, as well as tens of thousands of health-care workers and support staff employed in the facilities.

Some 1,308 residents have died from COVID-19-linked illness, while a total of 2,501 have been infected by the novel coronavirus. Ontario’s Ministry of Long-term Care is currently tracking outbreaks in 185 facilities, while cases have been reported in a total of 254.

Elliott said the push to test all residents and staff is nearly complete, opening up capacity for Ontario’s network of labs to begin processing more samples from other at-risk populations — such as those in retirement homes and shelters — as well as from the general public.

It’s not clear, however, exactly what will change. Health officials repeatedly said throughout April and the first half of May that anyone displaying symptoms could already be tested, though CBC Toronto has heard from dozens of people who said that was not the case.

Asked exactly what the new guidelines mean, Elliott said, previously testing was “really based on the judgment of the clinic that was in charge of the assessment centre.”

“It is more of an emphasis now on public testing, which we need to have so that we can understand what’s happening in the community as we open up,” Elliott said.

Dr. David Williams, Ontario’s chief medical officer of health, is expected to provide more details about the updated guidelines at his daily COVID-19 briefing at 3 p.m. ET. You can watch that news conference live in this story.

Ontario has previously revised its testing guidelines several times since the COVID-19 outbreak began in late January. Williams has stressed that a more robust testing regime will be essential in the coming weeks and months, as well as into the fall when a second wave of the novel coronavirus could hit.

The province’s report of 258 newly cases of COVID-19 means an increase of just 1.2 per cent in total cases — the smallest Ontario has seen so far — that marks several consecutive days of downward-trending figures.

There have now been a total of 21,494 infections in Ontario, of which more than 75 per cent are resolved.

The Ministry of Health’s official death toll sits at 1,798, an increase of 33 since the last update. Data compiled from regional public health units, however, puts the current toll at 1,884.

Some 17,429 COVID-19 tests were processed as of Wednesday, the first time since Sunday that the province has met its target of 16,000 tests per day. The backlog of tests waiting to be processed grew to 17, 578, the most in a single day since Ontario began reporting testing data.

Currently, there are 1,026 COVID-19 patients being treated in hospitals, an increase of eight since the day before. Those in intensive care units dropped to 184, down 5 from 189. And patients requiring a ventilator decreased by 3, from 144 down to 141.

The province has extended its state of emergency to keep pandemic public health measures in place until June 2.

Meanwhile, one day after the province announced a new emergency order that allows it to temporarily control the management of long-term care homes, a major health-care union is asking it to take over at six facilities hard hit by COVID-19.

In an open letter to Ford, the president of the Service Employees International Union (SEIU) says it members have lost confidence in the management at the following long-term care homes:

In her letter, Sharleen Stewart says that three SEIU members, all personal support workers, have died from COVID-19. She also notes that about 80 per cent of all COVID-19-linked deaths in Ontario have been residents of long-term care facilities.

Yesterday, Minister of Long-term Care Marrilee Fullerton said the government didn’t yet see a need to enact the emergency order, but wanted to keep it as an option moving forward.

Read the government’s plan for the first stage of reopening yourself: