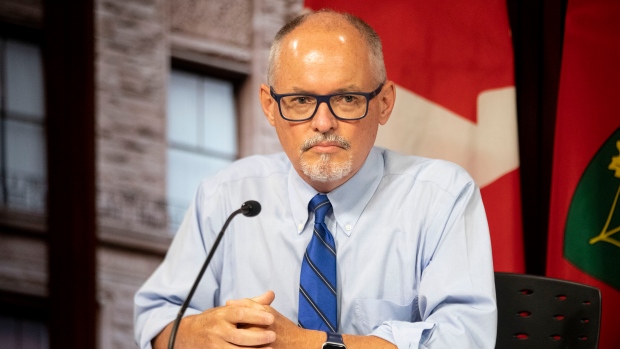 TORONTO — Ontario’s top public health official says that the more transmissible Delta variant will continue to threaten the progress that the province has made until about 90 per cent of eligible residents have been fully vaccinated.

The Doug Ford government has said that the final step of its reopening plan lifting virtually all remaining public health restrictions can’t begin until at least 80 per cent of those 12 and older have been partially vaccinated and 75 per cent have been fully vaccinated.

But during a briefing on Tuesday Chief Medical Officer of Health Dr. Kieran Moore suggested that the province needs to set a higher target in order to fully account for the risk of Delta.

“Certainly I’d love Ontario to have one of the highest vaccination rates in the world. The modelling, though, tells us that once we’re at around 90 per cent of the eligible population immunized that the risk of Delta will be less for us,” he said.

“If we remain at around 20 per cent of the population unvaccinated we won’t build a community immunity and you’ll get breakthrough infections in those individuals that are vaccinated because not all individuals, especially those that are elderly or vulnerable or immune suppressed, will get full protection from the vaccine. So the higher the proportion of our population immunized the less we’ll have to worry about those vulnerable people getting COVID despite getting vaccinated.”

Ontario has administered more than 18 million doses of COVID-19 vaccine but Moore said that there are still about 2.4 million eligible individuals who have yet to receive even their first shot.

That, he said, has him concerned given surging case counts in some jurisdictions with lower vaccination rates, particularly in the southern United States.

The problem is that Ontario’s vaccine rollout has slowed particularly when it comes to the administration of first doses.

On Monday the province administered more than 132,000 doses of COVID-19 vaccine but only about 17,000 of those were first doses.

At that rate it could take months for Ontario to hit the 90 per cent threshold among eligible residents.

“I have heard of multiple different immunizers starting to review the possibility for incentives and I think that’s reasonable in this environment,” Moore said on Tuesday. “It is the last mile or last kilometre where we are trying to really reach protection at the highest level for Ontarians and I think we will look at all possibilities for trying to achieve that whether it is through different partners in immunization incentivizing or ensuring that the accessibility and availability of immunization increases.”

The Delta variant is believed to account for more than 90 per cent of all new COVID-19 cases in Ontario.