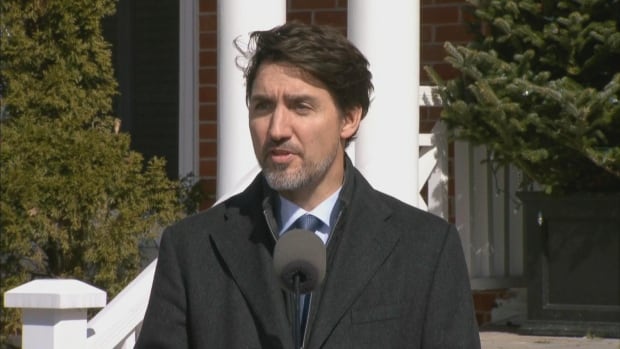 The package includes $27 billion in direct supports and another $55 billion to help business liquidity through tax deferrals.

Combined, the package represents more than three per cent of Canada’s GDP. Trudeau said the deep spending will not drive the country into recession, insisting “prudent” decisions made over the last five years have put Canada on a strong economic footing to weather the crisis.

“We will be able to make sure our economy gets back up to speed very quickly,” he said.

The supports aim to help Canadians pay for rent and groceries, to help businesses continue to meet payroll and pay bills, and to stabilize the economy. Supports could start flowing in weeks, Trudeau said.

Other measures include a GST credit for low-income Canadians and special support for the homeless and shelters helping people escaping gender-based violence.

Trudeau said there is a “real” desire among opposition political parties to help Canadians, and he is confident that the measures can pass quickly in Parliament.

PM Justin Trudeau announced a $82 billion aid package to help individuals and businesses during the COVID-19 crisis and assured Canadians the economy will recover quickly.  1:06

After the prime minister’s address, Finance Minister Bill Morneau will be outlining details of the government’s measures to help workers and businesses weather the economic impact of the pandemic.

The COVID-19 pandemic has wreaked havoc on the global economy, sending stock prices diving and forcing businesses to shut their doors as governments institute lockdowns and other social distancing measures to slow its spread.

Today, Canada and the United States reached an unprecedented deal to close their shared border to non-essential travel, as both countries try to restrict the spread of the coronavirus.

Trudeau announced Monday the government was closing Canada’s border to all travellers except for Canadian citizens, permanent residents and Americans, with exceptions for flight crew members, diplomats and some immediate family members of Canadians.

Canadian businesses of all sizes are feeling the pain from shutdowns, cancellations and public fear as the number of confirmed cases rises each day.

Trudeau said Tuesday that Parliament could be recalled to pass emergency economic measures.

The government is also considering invoking the Emergencies Act, which would grant it extraordinary powers to restrict movement and regulate and distribute critical supplies during the pandemic.

Today’s announcement is in addition to a $1 billion COVID-19 response package and supports for business already announced by the government.

Another $500 million is going to support provincial and territorial governments.

The federal government has also waived the one-week waiting period for employment insurance.

Morneau also announced last Friday the establishment of a $10 billion credit fund to lend money to businesses to help them continue operations.