You Are Here Home Health News Our Ever-Expanding Virus Vernacular 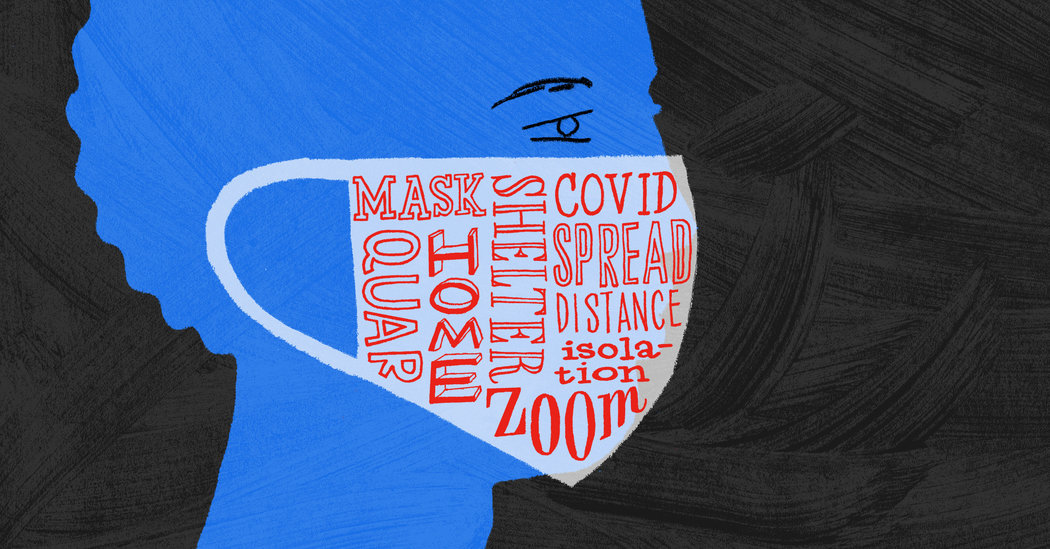 The coronavirus pandemic has upended all kinds of human behavior, including speech. Conversations are mediated by masks and screens, their sentences strung together with new vocabulary: medical terms, political mandates and slang devised to take the clinical edge off.

This new vernacular has many people playing virologist in the group chat, with talk of contact tracing and antibody tests; planning “socially distant” activities like Zoom birthday parties and drive-by greetings; and tweeting about life under “quar,” a pet name for “quarantine” (the term for an imposed period of isolation after exposure to a contagion that has become a catchall for life at home).

In a recent article for The New Yorker, the writer Karen Russell describes the assimilation of this novel lexicon as a kind of “language contagion.”

“‘Self-isolation,’ ‘social distancing,’ ‘abundance of caution’ — pairs of words I’d never seen together in a sentence back in January have become ubiquitous,” she writes. These phrases are moving “even faster than the virus, eye to mind, ear to mouth, disseminated by our iPhone screens and televisions.”

The proliferation of neologisms and jargon was significant enough to merit updates to the Oxford English Dictionary in April, beyond the dictionary’s standard quarterly updates.

“Social change brings about linguistic change,” Fiona McPherson, a senior editor at the O.E.D., said in a phone interview. “These are permanent additions to our vocabulary.”

She noted, though, that many of the words aren’t new; rather, their use has become more frequent, their meanings shifted in the new context of the pandemic. “Social distancing,” “self-isolation” and “coronavirus” date back decades, even centuries.

Ms. McPherson said that a lexicographer’s job is to be “descriptive, not prescriptive. We’re telling the story of what the words mean, but they only mean that because that’s how people are using them. And the stories are never completely finished.”

This evolution in the language can be seen as well in the rhetoric of care providers and politicians, which varies by region. The states are “on pause” or working to “flatten the curve,” their residents told to “stay at home,” “shelter in place” or remain “healthy at home.”

Rather than conveying a full-on shutdown, most leaders in the fight against the coronavirus are trying to underscore the temporary nature of the limits on public life and the active role each person plays in eventually lifting them.

The World Health Organization has recommended that “physical distancing” replace “social distancing” because it more accurately describes the goal of keeping a physical distance, while still encouraging safe, remote social connection, which is imperative for mental health.

“You’re learning every single day, and you’re going to be making changes in your advice and guidance,” said Glen Nowak, the director of the Grady Center for Health and Risk Communications at the University of Georgia. Mr. Nowak was the director of media relations for the Centers for Disease Control and Prevention during the H1N1 pandemic.

“You have to have user-friendly language and user-friendly terms,” he said. “If you realize early on, actually, a better way to say this would be ‘stay at home’ — that’s actually more direct, more responsible. That’s what we want people to do.”

Vivid language is easier to follow. In an email, Ms. Russell wrote that among the common epidemiological directives, “‘flatten the curve’ in particular felt like such an elegant and compact way to educate the public about the worst case scenario — a horrifyingly steep death toll — while simultaneously instructing us in what we must do to save thousands of lives. The work of translation a listener does is turning those hypothetical data points into real, dimensional human beings.”

Looking ahead, linguistic changes are yet to come, Ms. McCulloch said. She explained the concept of a retronym — assigning a new name for a default now dated by technology or social change; for example, with the rise of cellphones, non-mobile phones became “landlines.”

“We are still in the phase of naming the new things we’re encountering, but eventually we’ll get to the stage where we need names for what things were like before the virus hit,” she said. We’re still assimilating to “the new normal” and its accompanying word bank, while longing for “the before times.”

But when we return to the life we knew, forever altered as it may be, we may need new qualifiers: first dates that aren’t over FaceTime; IRL hangouts, unmasked and less than six feet apart; to-stay drinks at bars. Gov. Andrew M Cuomo has referred to New York’s proposed May 15 reopening as the “Un-Pause.”

Ms. McCulloch wondered: “When this is hopefully a memory, and we start talking about what we’re doing again, now that we can hang out in real life, what are we going to be calling that?”