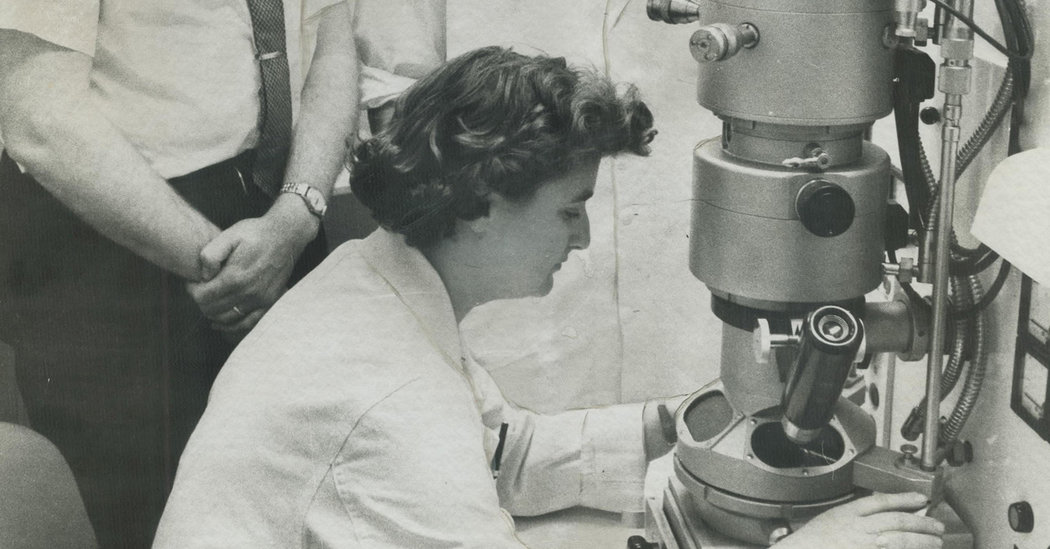 Overlooked is a series of obituaries about remarkable people whose deaths, beginning in 1851, went unreported in The Times.

With no money to pay for college in post-World War II Scotland, 16-year-old June Almeida took an entry-level job in the histology department of a Glasgow hospital, where she learned to examine tissue under a microscope for signs of disease. It was a fortuitous move, for her and for science.

In 1966, nearly two decades later, she used a powerful electron microscope to capture an image of a mysterious pathogen — the first coronavirus known to cause human disease.

Almeida had just been recruited to St. Thomas’ Hospital in London, where she received a virus known as B814 from British scientists who were studying the common cold. The scientists, led by David Tyrrell, knew there was something different about the virus. Though volunteers infected with B814 didn’t get the sore throats typical of most head colds, they experienced unusual feelings of malaise. And the virus was neutralized by fat solvents, which meant that unlike the average cold virus, B814 had a lipid coating.

Still, without an image of the virus, the scientists could learn only so much.

Hearing about Almeida’s expertise from a colleague, Tyrrell shipped specimens to her that had been infected with B814, as well as well-known flu and herpes viruses, which would serve as controls.

Almeida, however, was confident, Tyrrell recalled in his book “Cold Wars: The Fight Against the Common Cold” (2002), written with Michael Fielder. “She claimed she would be able to find virus particles in our organ cultures with her new improved techniques,” he wrote. “It was worth a try.”

The results, he wrote, “exceeded all our hopes. She recognized all the known viruses, and her pictures revealed the structures beautifully. But, more important, she saw virus particles in the B814 specimens!”

The only remaining problem was figuring out what to call the new virus. Influenza-like sounded a bit feeble, Tyrrell wrote. The images of B814 revealed that the virus was surrounded by a kind of halo, like a solar corona. The coronavirus was born.

From her own unpublished research and the work of others, Almeida immediately recognized that B814 was related to the infectious bronchitis virus, which causes serious disease in chickens. But until the emergence of SARS in 2002 and now Covid-19, coronavirus was largely seen as posing little threat to people.

“Not much was made of it,” said Kenneth McIntosh, a professor of pediatrics at Harvard Medical School, who, as an investigator at the National Institutes of Health, discovered another coronavirus around the same time Almeida did her research. “It was just the common cold. Not a big deal.”

June Dalziel Hart was born on Oct. 5, 1930, in Glasgow. Her father, Harry Leonard Hart, was a bus driver; her mother was Jane (Steven) Dalziel. After her stint as a laboratory technician in Glasgow, Almeida took a similar position at St. Bartholomew’s Hospital in London.

In 1954 she married Enriques Rosalio Almeida, an artist, and the couple immigrated to Canada.

The move to Canada proved lucky. In the late 1950s, Almeida found greater opportunity there than in London for people without college degrees.

She found work as an electron microscopy technician at the Ontario Cancer Institute (now Princess Margaret Cancer Centre), a new research center in Toronto. There she mastered a technique called negative staining, in which a heavy metal, typically phosphotungstic acid, was used to heighten the contrast in the images. She would use this method to detect the coronavirus.

In the 1960s, detecting virus in tissue samples was painstaking work. Samples were often cluttered with cellular debris, and virus particles were few and far between. Examining a single sample could take hours.

“It took attention to detail, not just with the eyes, but preparing the materials, everything had to be exactly right,” McIntosh said in a telephone interview. “Attention to detail, patience and persistence. June Almeida had those qualities in spades.”

One reward for her effort was the chance to see something no human had ever seen. Conveying a sense of wonder, she began a 1963 journal article about the symmetrical structure of viruses with an ode to electron microscopy — and an apology to the poet William Blake.

In the phosphotungstic night,

What immortal hand or eye,

After several years in Canada, Almeida accepted the offer from St. Thomas’ Hospital and returned to London. In 1967, she moved to the Royal Postgraduate Medical School. She finished her career at Wellcome Research Laboratories, where she worked on vaccines and diagnostics.

By then many textbook chapters and virology articles featured the finely detailed images she produced. She was also better known for her other accomplishments, including capturing the first image of the rubella virus and identifying the structure of the virus that causes hepatitis B.

She also perfected a technique called immune electron microscopy, in which antibodies are used to clump viruses, making them easier to identify.

Almeida passed her methods on to other virologists, who used them to make important discoveries. Among those she trained was Albert Kapikian, who used immune electron microscopy at the National Institutes of Health to discover the norovirus, a stomach bug that accounts for about half of all food-borne illness.

In retirement, Almeida trained as a yoga instructor, and, with her husband, traded antiques and learned china restoration. In the late 1980s, she returned to St. Thomas’ Hospital as an adviser, applying her expertise with negative staining to help produce some of the first high-quality photographs of H.I.V. made with an electron microscope.

“True to form,” her daughter, Joyce, wrote in the British Medical Journal in 2008, “she could not leave electron microscopy forever.”