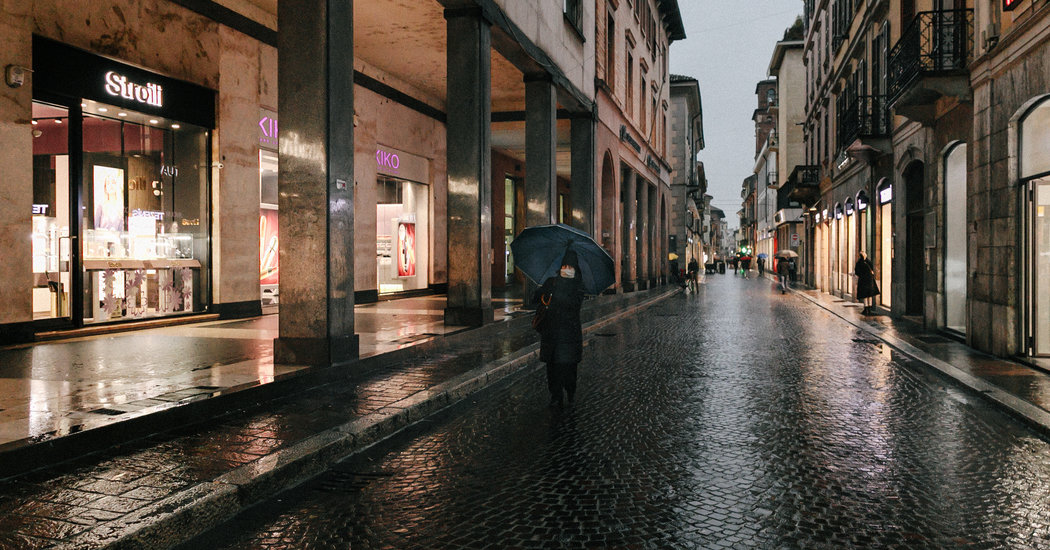 PARIS — Keeping your salary while caring for a quarantined child. Exercising the right to not work if you are afraid of getting ill. Sick-leave pay for up to six months.

Europe is sometimes considered a home of overly generous social policies. But as countries around the world scramble to control the deadly coronavirus outbreak, some analysts say those social programs and protective labor rules could serve as a powerful vaccine against the virus’s feared economic toll: recession.

Europe’s universal health care systems, for example, help bolster the economy by supporting consumer spending in the midst of a serious outbreak, because people aren’t worried about getting a big bill if they get sick.

“I would be more concerned in the U.S. what the cost would be,” said Ángel Talavera, an economist at Oxford Economics in London. “For Europeans, that is not a consideration we have in mind.”

Political leaders and central bankers have been full of assurances in recent days that they will do what it takes to blunt the impact and avoid a recession. An emergency cut in interest rates on Tuesday by the Federal Reserve sought to contain the fallout, but when or how much it would help was unclear.

But more than rate cuts or bursts of spending, economists say, the best short-term measures to prevent an economic downturn may be “automatic stabilizers” — existing programs or regulations that protect workers, provide low-cost health care or help companies get through a lean period. Some of these measures were adopted during another time of financial stress: the 2008 financial crisis.

Assurances that many workers won’t have to choose between caring for their health and paying their rent is a crucial psychological factor as Italy and France shut hundreds of schools, Britain unlocks an “action plan” to prevent the virus’s spread and businesses across the Continent cancel trips and meetings to limit their employees’ exposure to the epidemic.

Certainly, the benefits vary from country to country. And while Uber drivers, entrepreneurs and the self-employed in many European countries have access to health care at lower costs than in the United States, they still don’t get the same level of wage protection as salaried employees.

Italy announced Thursday that it would unleash a 7.5 billion euro (about $8.5 billion) support package to help businesses and families hit by the coronavirus, on top of €900 million in support announced last week.

The governments of most European countries are offsetting the cost of emergency sick leave for employers and aiding smaller companies that are scrambling to survive.

Most European governments require businesses to grant employees some form of paid sick leave. Germany, France, Denmark and the Netherlands are among the countries where workers have a right to receive full pay, in some cases for at least six weeks, if they are ill, are quarantined or are told to stay home by their employers.

In France, employees can also exercise what is known as “the right of withdrawal” from work by walking off the job if they believe their health and safety are at risk, without having wages docked or facing punishment.

Employees and their union at the Louvre Museum in Paris voted to stop working earlier this week, citing fears the virus could be spread by visitors. Management contested the move but couldn’t override it, keeping the world’s most visited museum closed for three days. Workers returned Wednesday after officials announced enhanced health security measures.

The virus’s economic costs are already tangible in Europe. For example, cancellation of the Geneva International Motor Show, which had been scheduled to open to the public on Thursday, deprives the European auto industry of one of its premier showcases and means the millions they spent on elaborate displays went to waste.

Some governments are moving more aggressively than others to offset the financial strain, especially for the small and medium-size firms that make up the bulk of economic activity in Europe, by providing tax breaks, extending deadlines for tax payments and easing access to government finance schemes.

In Italy, the epicenter of Europe’s coronavirus epidemic, the government promised to deploy measures it has used after earthquakes for 11 quarantined towns around northern Lombardy and Veneto, the so-called red zone of the outbreak, where some businesses are losing 100 percent of their income.

Among other support, the companies can get immediate access to unemployment benefits for furloughed workers and will be allowed to pay their taxes late, helping to mitigate a collapse in sales and production.

Others are holding back until the signs of economic damage are more clear. In Spain, officials said it was too early to take financial measures, with so much of the economic impact of the coronavirus in question. Germany’s finance minister, Olaf Scholz, promised this week that the government would take action if the outbreak hit the country’s already hard-pressed economy, but did not offer any specific proposals. There remains a deep reluctance in Germany to take on debt to pay for fiscal stimulus.

Yet countries where the spread of the epidemic shows no signs of slowing are pulling out the stops. France escalated its response this week as the coronavirus threat rippled through schools, rushing through new emergency measures allowing parents who can’t find child care to receive full pay while staying home with children who must be quarantined.

And in Denmark, the authorities said parents could take up to 52 weeks’ leave to care for a seriously ill child under age 18.

Employers in Britain were already required to grant time off if a relative or child fell ill under short notice. Prime Minister Boris Johnson announced this week that the country’s mandatory sick-pay system would begin payments on the first day for people with suspected coronavirus, rather than the fourth day as for other illnesses. Critics pointed out that two million low-paid workers — those who earn less than 118 pounds weekly, or about $153 — did not make enough money to qualify for the help under Mr. Johnson’s plan.

The concerns highlight the uneven nature of such guarantees.

In Italy’s quarantined red zone of Veneto, Taylan Arslan, 33, was forced to postpone the opening of a kebab-making plant after the government imposed a ban on all nonessential economic activity, leaving his 57 employees unable to go to work. Under the government’s emergency support plan, Mr. Arslan will be able to get access to unemployment benefits for his workers more easily and quickly.

Mr. Arslan would also get €500 in support. But the money would not be nearly enough to recoup the lost earnings for his business, even with the proffered tax breaks, he said. He estimated that he had lost €12,000, or about $13,500, per day.

The government “can keep their €500 a month,” he said, worrying about the tons of meat spoiling in his freezers. “I need to work.”

But Italy can go only so far. Government debt far exceeds annual output of the economy, and Rome cannot afford to lose the confidence of bond investors.

“In the short term, the government can help,” said Carl Weinberg, chief economist at High Frequency Economics in White Plains, N.Y. “But the government can’t support people forever. At the end of the day, somebody has to pay for this.”