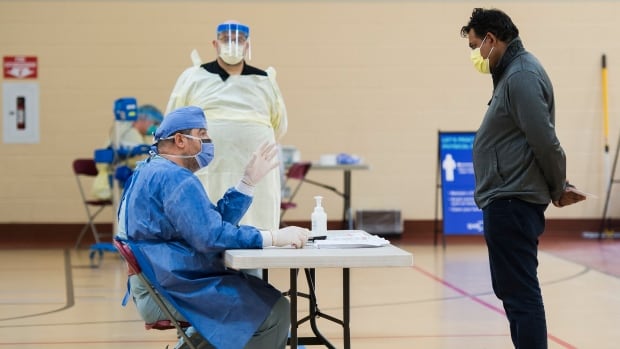 As efforts continue to curb the spread of COVID-19 in Canada, where the number of reported cases has surpassed 89,000, a cluster of cases in Quebec’s elementary schools is shining a light on the cost of reopening the hardest hit provinces.

At least 41 staff and students tested positive for the novel coronavirus in the first two weeks after elementary schools outside the Montreal area reopened, the province’s education department says.

“It’s normal that by having the daycare, the school being open to the community, there can be cases,” said Dr. Horacio Arruda, the province’s director of public health.

WATCH | Wastewater samples point to where COVID-19 cases are:

Wastewater samples from sewage are being used to determine the existence of COVID-19 in communities and could give advance warning of where a second wave is taking shape. 2:03

“The advantage in those areas is that they’re young children, and we didn’t put any personnel who was high-risk (in the classroom).”

The numbers came from a survey of school boards conducted May 25, which found that 19 students and 22 staff members were infected. Twelve of the province’s 72 school boards did not offer up data.

News of the outbreaks came as Quebec reported another 530 cases of the virus on Friday, pushing its total above the 50,000 mark. The death toll climbed by 61, to 4,363.

In Ontario, meanwhile, where officials announced the case count had surged by 344 for a total of 27,210 with 2,230 deaths, Premier Doug Ford said he was looking at reopening the province region by region.

“The reality on the ground is different in every part of the province,” Ford said.

Two-thirds of the province’s cases are in the Greater Toronto Area, while some other public health agencies say they have few or no current patients.

New Brunswick, which didn’t report any new cases of the virus for the two weeks leading up to May 21, continued to grapple with a new outbreak of eight cases in the Campbellton area. Two of those infected are in intensive care, said Dr. Jennifer Russell, the province’s chief medical officer of health.

Dr. Jennifer Russell calls for people to reserve judgment until an investigation into an outbreak in Campbellton linked to a doctor who didn’t self-isolate is complete. 12:15

As of 6:00 a.m. ET Saturday, Canada had 89,418 confirmed and presumptive coronavirus cases, with 47,533 of them considered recovered or resolved. A CBC News tally of deaths based on provincial data, regional information and CBC’s reporting stood at 7,046.

Russell said over the next four to five days, teams will be doing “a lot” of testing.

It’s another blow to the tourism industry, which is already struggling because of COVID-19 cancellations, closures, and travel bans. 1:58

Russell urged people to be patient and understanding as public health officials work to trace contacts and complete tests. The Campbellton region has been pushed back a level in terms of reopening, which has meant some businesses that were getting ready to open their doors will now wait at least another week.

N.B. Premier <a href=”https://twitter.com/BlaineHiggs?ref_src=twsrc%5Etfw”>@BlaineHiggs</a> says it is “prudent” to postpone the province’s next reopening phase, until officials can determine just how many people may have been exposed to COVID-19 by a medical professional who failed to self-isolate after returning from Quebec. <a href=”https://t.co/xATvgE1rUs”>pic.twitter.com/xATvgE1rUs</a>

Statistics Canada, meanwhile, has announced that gross domestic product fell at an annualized rate of 8.2 per cent in the first three months of 2020 — the worst quarterly showing since 2009 — even though efforts to contain the novel coronavirus by shuttering businesses and schools didn’t begin in earnest until March.

Many of those businesses are now reopening in a bid to re-employ some of the three million people who lost their jobs, putting workers and clients in close proximity and lending new urgency to the testing and tracing process.

Here’s what’s happening in the provinces and territories

British Columbia this week has had the lowest number of deaths and new cases since a public health emergency was declared on March 18.  In the past seven days, there has been a total of 56 new cases, including four announced on Friday. Read more about what’s happening in B.C.

Alberta has ordered 20 million non-medical masks and plans to distribute them to residents, offering up to four masks per person at no cost. McDonald’s, Tim Hortons and A&W restaurants have partnered with the province to distribute the masks at drive-thrus. The province reported 24 new cases of coronavirus Friday, but no new deaths. There are 616 active cases in province, with 55 people in hospital, four of them in intensive care. Read more about what’s happening in Alberta.

Saskatchewan reported two more coronavirus cases on Friday, one in the south and one in the Saskatoon area. The province has 61 active cases. Read more about what’s happening in Saskatchewan.

WATCH | An infectious disease specialist answers questions about COVID-19, including whether someone who has recovered can stop physical distancing:

An infectious disease specialist answers viewer questions about the COVID-19 pandemic, including whether someone who has recovered from COVID-19 can stop physical distancing. 2:46

Manitoba reported no new cases on Friday after confirming that two new cases on Thursday were related to out-of-province travel. Read more about what’s happening in Manitoba.

Issues continue to surround Ontario’s failure to gather and share data about COVID-19, which many say is key to controlling outbreaks. 1:44

In New Brunswick, Premier Blaine Higgs is hoping any reopening of the border with Maine will be delayed. Higgs raised his concerns on a federal call Thursday night, where he and other premiers learned the border might be reopened soon for people in communities next to them. Higgs said the reopening for border friends and families could come in the next few weeks or even days. Read more about what’s happening in N.B.

Nova Scotia reported no new cases and one new recovery on Friday, bringing its case total to 1,055, with 978 considered resolved. It’s the first day with no new cases since March.The province has reported 59 deaths to date, with most linked back to the Northwood long-term care home in Halifax. Read more about what’s happening in N.S.

In Prince Edward Island, Health Minister James Aylward said more than 1,100 surgeries have been delayed because of COVID-19. The surgeries, which included almost 500 eye surgeries, were all postponed during the 10-week period in which elective surgeries were put on hold. Read more about what’s happening on P.E.I., which again reported no new cases on Friday.

WATCH | Buying or selling a home during the pandemic — what to expect:

The COVID-19 pandemic has changed what happens when you buy or sell a house. Andrew Chang walks through what’s changed in the real estate game. 1:48

Newfoundland and Labrador will allow people to expand their household bubbles, officials said Friday. The government first allowed for bubbles of two households on April 30. Now households can expand their bubbles by up to six more people. New members of a bubble do not have to be from the same household, but cannot be changed once decided. The province, which announced a new COVID-19 case related to travel on Thursday, had no new cases on Friday. Read more about what’s happening in N.L.

Yukon health officials say the territory is on track to allow people in July to travel freely between the territory and neighbouring B.C. That means anybody arriving in Yukon from B.C. would no longer need to self-isolate for 14 days. Read more about what’s happening across the North.

Many Italians are concerned about the potential for more COVID-19 spread as the country reopens its borders to free travel and people start returning to workplaces. 1:58