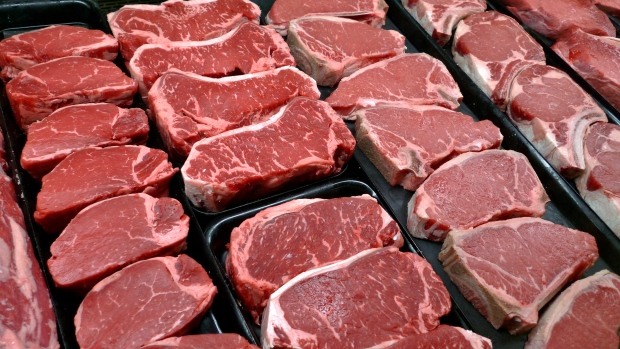 Eating beef, lamb, pork and processed meats will increase your risk of coronary heart disease later in life, according to a new meta-analysis of studies on over 1.4 million people who were followed for 30 years.

Also called coronary artery disease, the condition is the leading cause of death and disability globally. It develops when fatty deposits of cholesterol create plaque buildup on the walls of the arteries that supply blood to the heart.

The risk for coronary heart disease increased as the amount of meat increased, according to the study published Wednesday in the journal Critical Reviews in Food Science and Nutrition.

For each 1.75 ounces (50 grams) of beef, lamb and pork eaten, the risk of coronary heart disease rose 9%. A recommended serving of meat is about 3 ounces (85 grams), the size of bar of soap or deck of cards, according to the American Cancer Society.

For each 1.75 ounces (50 grams) of processed meats such as bacon, ham or sausage that were eaten, the risk rose by 18 per cent.

“This is in line with what has been found for bowel cancer, where processed meat has been shown to be associated with higher increase in risk than red meat,” Knüppel said.

Nine to 18 per cent doesn’t sound like that much of a risk? It might if you consider few people eat less than 2 ounces of red or processed meat at any meal.

Take a restaurant dinner of a typical cut of beef as an example. Filets, sirloins, strip and rib eye steaks eaten at a steakhouse can weight between 9 and 12 ounces (255 to 340 grams). That means you could easily consume about 5 to 7 ounces (142 to 198 grams) of beef in a single meal. Did you have bacon for breakfast? Your risk is even higher.

NO ISSUE WITH POULTRY

The report also delivered some good news for carnivores: There didn’t appear to be a link between eating poultry, such as chicken and turkey, and an increased risk of coronary heart disease.

Considered lean meats, most types of poultry do not contain the levels of saturated fat as found in red meat, nor the high levels of sodium that are part of processed meats. Saturated fat plays a major role in the development of plaque on the walls of the arteries, a key contributor to the blockages associated with coronary heart disease. Sodium can raise blood pressure, also restricting the flow of blood to the heart.

SWITCH TO A PLANT-BASED DIET

Studies have shown the best diets to follow to reduce risk of heart disease are plant-based. In rankings for best diet for heart health by U.S. News & World Report, the Mediterranean diet tied with the DASH diet and the Ornish diet for top honors in best heart-healthy diet.

The Ornish diet was created in 1977 by Dr. Dean Ornish, founder of the nonprofit Preventive Medicine Research Institute in California. Ornish calls the diet the only scientifically proven program to reverse heart disease in a random clinical trial without drugs or surgery. Experts have said, however, that the diet is restrictive and hard to follow.

The DASH diet is often recommended to lower blood pressure. Its premise is simple: Eat more veggies, fruits and low-fat dairy foods while cutting way back on any food high in saturated fat and limit your intake of salt.

Studies have shown that following this diet can reduce blood pressure in a matter of weeks.

The Mediterranean Diet took the gold medal for overall best diet in the 2021 rankings. Such high accolades are not surprising, as numerous studies have found the Mediterranean diet can reduce the risk for diabetes, high cholesterol, dementia, memory loss, depression and breast cancer. Meals from the sunny Mediterranean region have also been linked to stronger bones, a healthier heart and longer life.

The diet features simple, plant-based cooking, with the majority of each meal focused on fruits and vegetables, whole grains, beans and seeds, with a few nuts and a heavy emphasis on extra-virgin olive oil. Say goodbye to refined sugar and flour except on rare occasions. Fats other than olive oil, such as butter, are consumed rarely, if at all.

Meat can make a rare appearance, usually only to flavor a dish. Instead, meals may include eggs, dairy and poultry, but in much smaller portions than in the traditional Western diet. Fish, however, are a staple.

Want to make the Mediterranean diet one of your goals this year? Get started by cooking one meal each week based on beans, whole grains and vegetables, using herbs and spices to add punch. When one night a week is a breeze, add two, and build your nonmeat meals from there.