You Are Here Home Health News Reopening of Montreal stores pushed back a week, schools to reopen as planned: Legault 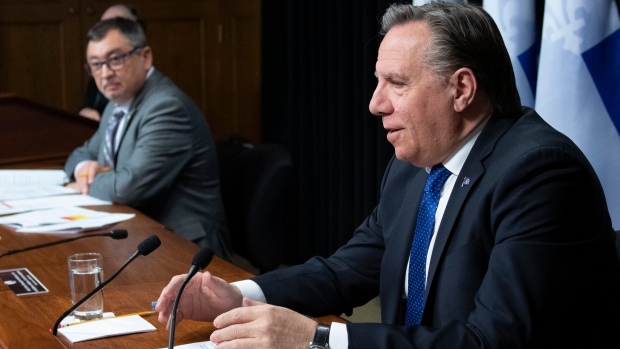 MONTREAL — The reopening of non-essential stores in the Montreal area, which was scheduled to begin May 11, has been pushed back to May 18, Quebec Premier Francois Legault announced Monday, but the region’s schools are still set to reopen as planned.

Legault cited the high number of COVID-19 cases and related hospitalizations in the Montreal area as one of the reasons for pushing back the gradual business reopenings there.

“There is a very small margin for error for a deconfinement in Montreal,” Legault said, while saying that the situation in the Montreal metropolitan area remains “under control.”

Non-essential stores in the rest of Quebec started reopening Monday.

Manufacturing and construction, two other industries that are set to reopen in the Montreal area May 11, will do so as scheduled, Legault added.

“We still have two weeks ahead of us,” until Montreal-area schools reopen, Legault said. “We will follow the situation very closely and take a data-driven decision.”

Legault also pushed back on public statements by QESBA, the group that represents Quebec’s English school boards, saying they would not reopen English schools unless the boards felt it was safe to do so.

Earlier Monday, Pierre Arcand, interim leader of the opposition Quebec Liberal Party, had called on Legault to delay the easing of confinement measures in Montreal, saying the province needs to better control the virus in the region and ramp up testing before making any such move.

Legault said he had already decided to do so before Arcand’s call.

There are now 2,280 people who have died of COVID-19 in Quebec, health authorities announced Monday, as confirmed cases in the province reached 32,623.

Of the newly reported deaths, 72 were in Quebec’s long-term care facilities for seniors (CHSLDs), which have been hit hard by COVID-19.

There are 1,772 people being treated for COVID-19 in Quebec hospitals as of Monday, up 18 from the 1,754 reported Sunday. Of those in a hospital, 218 are in intensive care, unchanged from the number reported 24 hours earlier.

There are 826 people waiting for COVID-19 test results in Quebec as of Monday, up two from the 824 reported Sunday.

The number of people in Quebec who have recovered from COVID-19 as of Monday was 7,578, up 320 from the 7,258 recoveries reported a day earlier.

With 16,606 cases, the Montreal area remains the hardest hit by COVID-19 in Quebec; you can find a regional breakdown of COVID-19 here.