You Are Here Home Health News Risk of school staff getting COVID-19 at work no greater than risk in community: B.C. study 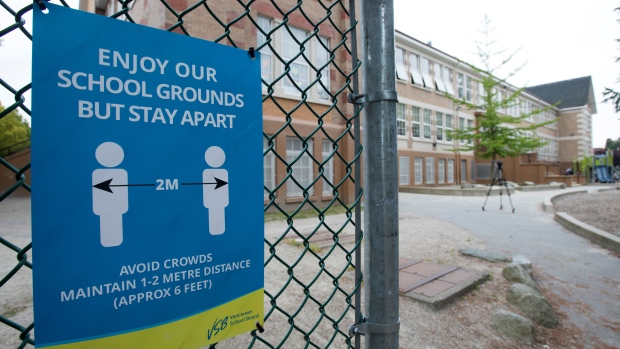 VANCOUVER — School staff are no more likely to contract COVID-19 at work than they are in day-to-day life in their communities, a new study out of B.C. has found.

The study’s results were released as schools are wrapping up for the summer following a challenging year that saw changing policies, closures and outbreaks for many educational facilities across the country. For teachers, parents and students that led to stress and uncertainty.

But the recent study, funded by the federal government and conducted by researchers at B.C. Children’s Hospital, the University of British Columbia and Vancouver Coastal Health, suggests there was a low rate of infection among school staff.

“These findings show that, with appropriate mitigation strategies in place, in-person schooling is not associated with significantly increased risk of (COVID-19) transmission for classroom-based staff compared to members of the general population,” said Dr. Pascal Lavoie, principal investigator of the study, in a news release.

The study, released on June 18 and still subject to a peer review, tested school staff for SARS-CoV-2 antibodies, which would show they had been infected previously. The hope was to determine how many people had the virus, regardless of whether they felt symptoms.

Of the 1,556 people researchers tested, 2.3 per cent tested positive for antibodies. According to the study, that number is similar to the number of infections in a reference group of similar age, sex and area of residence.

“I think it’s very reassuring for parents,” said CTV News medical specialist Dr. Marla Shapiro, who explained the study was completed when COVID-19 rates were higher in the community and vaccination rates were lower.

“If during this period of time we really saw that it mirrored what happens in the community. It really tells us that with mitigation strategies that our schools are safe places.”

Shapiro said the situation “will only be better by the fall” as vaccination rates continue to rise.

The study also included a survey of 1,689 school staff. Of those, 278 said they had close contact with a student or co-worker who had tested positive for COVID-19, but only five staff who were infected themselves believed it was likely they got infected while at work.

“The results suggest that only a few teachers and school staff contracted SARS-CoV-2, and most assume that they did not contract it at school and thought they caught it from friends or family,” Lavoie said.

The results of the study echo what B.C. provincial health officer Dr. Bonnie Henry has been saying for months. In a modelling presentation in April, Henry said only about eight per cent of COVID-19 cases in VCH schools recorded between Sept. 10 and Dec. 18 – whether they were students or staff – were connected to transmission in the school setting.

According to the provincial health officer, this showed that transmission in schools is being driven by transmission in the broader community, rather than the other way around.

Last week, Henry announced students and staff will see a “near normal” return to class in the fall. All students are expected to be back in the classroom for full-time, in-person instruction and the cohort system will come to an end. Guidance on mask-wearing in schools will be confirmed later in the summer.