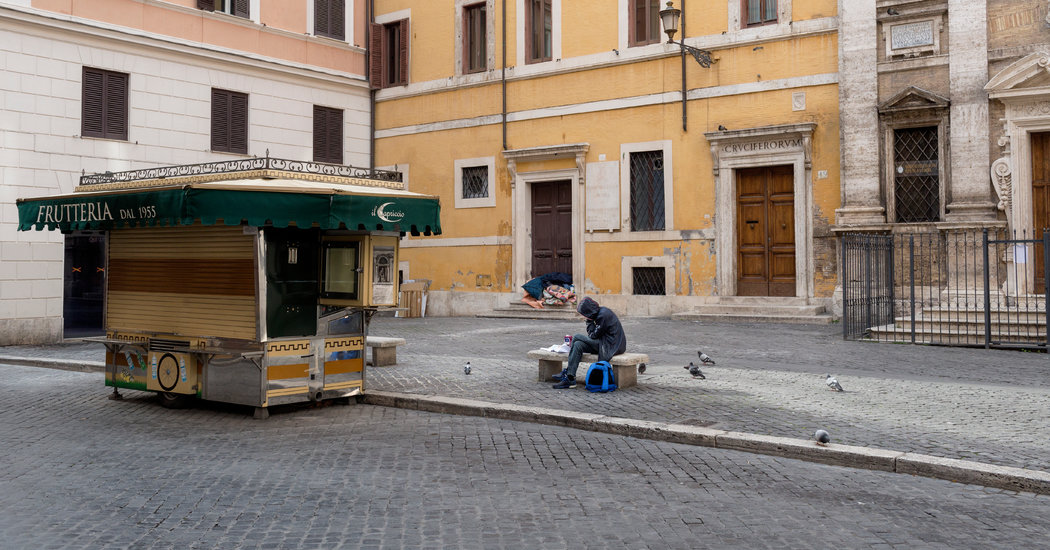 ROME — For more than two weeks, the Italian government has trumpeted a central message for containing the spread of the coronavirus: Stay home.

But for the thousands who are homeless or living in extreme poverty in Rome, keeping off the streets is nearly impossible.

“The message given to stay home is a message that they can’t respond to because they don’t have anywhere to go,” Francesca Zuccari, coordinator of services for people in extreme poverty for the Community of St. Egidio charity, said of the 8,000 people who typically live on Rome’s now empty streets.

“The problem is that these are the most fragile members of the population, and those who are most exposed,” she said.

Italy has recorded nearly 64,000 infections, the most in Europe, and more than 6,000 deaths, the most in the world. As the country struggles to contain the outbreak, the government has enacted strenuous new rules.

The essentials of staying safe and complying with the government’s orders, however, are a luxury to the country’s poorest.

How do you wash your hands without a sink? Stock up on food without money? Or shelter in place without a home?

Though soup kitchens and shelters in Rome remain open, the informal systems of support — spare change dropped in a cup, or a paid-for breakfast pastry — no longer exist. The closing of bars and restaurants has inadvertently cut off access to washrooms.

“Citizens keep being told to wash their hands,” Ms. Zuccari said. “The homeless don’t know where to go.”

More than anything, the seismic disruption to street life in the city has meant many are going hungry.

Three days a week, people can receive a hot meal at the soup kitchen that St. Egidio runs from a palazzo in Rome’s central Trastevere neighborhood. On other days, the charity’s volunteers deliver box dinners in areas where the homeless usually congregate, including the city’s main train stations. Every week, the charity distributes 2,500 boxed meals.

“The delivery meals have increased, because the demand has grown, but they are also a way to let people know that they haven’t been abandoned,” Ms. Zuccari said.

On a recent afternoon, the streets of Trastevere were uncommonly silent. The few stragglers appeared to have the same destination, the St. Egidio soup kitchen.

Because of social distancing, fewer guests can sit together at the long rows of tables in the kitchen’s main dining hall, so the charity stays open longer “to give everyone a chance to eat,” Ms. Zuccari said.

St. Egidio was founded in 1968 when a group of students decided they wanted to help the city’s poor. Ms. Zuccari joined more than 40 years ago. “I was very young,” she said of the time when some 70,000 people lived in shantytowns in Rome. “Now poverty is more hidden.”

“In the city, it’s aggravated by solitude,” she added. “People often end up on the streets because they can’t turn to anyone to help them.”

Ms. Zuccari said that despite the “great hunger,” the number of guests using the soup kitchen had dropped in the past several weeks. “There’s the problem of moving around in the city, and even the homeless are being stopped by the police, so they are afraid,” she said.

Those found violating the city’s quarantine laws can face fines of about $220 and up to three months in prison. St. Egidio is not the only charity that is still operating. Many homeless have moved closer to the Vatican. There, the pope’s charity distributes food and operates showers near the colonnade of St. Peter’s Basilica, and the Missionaries of Charity, the congregation founded by Mother Teresa, also minister to the poor in the area.

Charities struggle for money at the best of times, but St. Egidio now needs additional funds for face masks, food and hand sanitizer. Many of the older volunteers, who once staffed its kitchens or distributed box meals, have heeded government warnings to stay home.

On a recent evening, guests at the soup kitchen included a 34-year-old homeless man, who would identify himself only as Arturo.

“It’s a disaster right now,” he said. “There are many people suffering.”