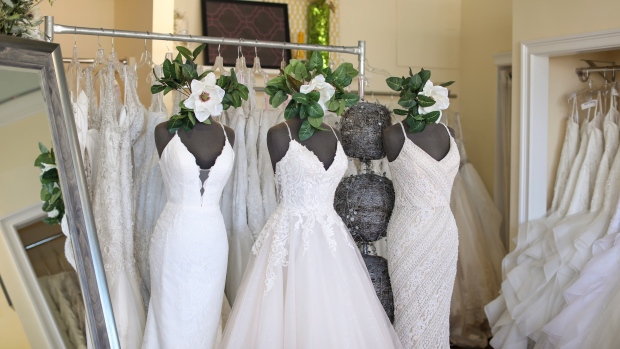 NEW YORK — Guests are jittery, travel is tangled, and soon-to-be brides and grooms are facing tough choices because of the coronavirus outbreak: postpone, cancel or forge ahead with their weddings?

Uncertainty as virus cases grow in the U.S. and elsewhere has sent ripples through the wedding industry, from photographers and caterers to harried wedding planners and venues.

“So much extra stress,” said 26-year-old bride Hayley Pass in Saddle Brook, New Jersey. “After all this planning it’s like, really, we’re going to postpone? We just really want it to happen but it seems like the worst is yet to come.”

She and her fiance had 155 confirmed guests for their March 22 nuptials in Cedar Grove, New Jersey, with a handful of cancellations due to virus fear. One relative made it clear that she and her family will attend but would keep hugging and kissing to a minimum.

The couple will only cancel the wedding if their venue — or their closest loved ones — pull out. They would head to the courthouse instead to get hitched, putting off their party until COVID-19 subsides. Other couples expressed similar resolve to keep their wedding dates as the industry heads into the busy June season.

Rescheduling or cancelling raises a world of questions. What are the odds that vendors will all be available on the same new date and time? Will couples lose money, in deposits and beyond already paid? Standard wedding insurance doesn’t cover anxiety over a spreading virus that has come with restrictions on travel and large gatherings in spots around the world. Some insurance companies are fielding a barrage of queries over how policies work in such a unique situation.

For most people, the new coronavirus causes only mild or moderate symptoms, such as fever and cough. For some, especially older adults and people with existing health problems, it can cause more severe illness, including pneumonia. The vast majority of people recover.

In the wedding world, vendors are feeling the pinch.

Professional planners who have longstanding relationships with suppliers have found themselves negotiating new minimum guest counts to help save their clients money as friends and family decline. Travel agents said they’re trying to reroute honeymoon flights to avoid popular destinations in Asia and Europe that have been restricted or closed, such as Lake Como in Italy’s hard-hit Lombardy region.

“We’re trying to guess what is to come,” said Sasha Souza, a wedding planner in California’s wine country. “Guest counts are dropping dramatically. We have a wedding for 150 people in June and we’re now looking at 50 people. Guests are just like, ‘I’m not coming.’ Maybe they’ll change their minds. People are receiving such mixed messages right now.”

Gabrielle Wheeler, 22, was supposed to get married in April in the olive groves of an Italian villa in the Tuscan town of Grosseto. She now has to settle for a wedding at the same place in a year. She tried to cancel when travel restrictions were imposed, but the venue wouldn’t refund her money.

“Honestly, I’m upset,” said Wheeler, who lives in Amsterdam. “I have to make the best of it.”

Abby Murray, a Charlotte, North Carolina, travel agent who specializes in honeymoons, said new business has come to a halt as existing clients postpone, shift destinations from hot spots like Italy to Hawaii, Costa Rica and the Caribbean, or try to navigate around connections through China.

At this time of year, she would usually be handling 20 clients. She now has two.

“People are scared to book their honeymoons right now. People don’t even want to explore it. They’re going to move forward with their weddings but take their honeymoons at a later date,” Murray said.

Dresses are also a problem for some.

The Green Bride shop in Littleton, Colorado, typically receives up to 60 wedding dresses shipped from China each month from February through May. In February, it received only four.

“We are on crunch time,” said Holly Marsh, one of the owners. “If the wedding is in June, and the dress is supposed to be here in February and it’s not going to get here until May, what do you tell them?”

David Gaffke, who owns the shop Complete Bridal in East Dundee, Illinois, relies heavily on China for manufacturing, as do most in the wedding gown business.

“It’s frustrating when it comes to having to tell a bride that we’re not able to fulfil your needs,” he said. “This is the most important dress they’re going to wear.”

Larger retailers, including David’s Bridal with more than 300 stores, said their supply networks are holding steady.

Photographer Michael Busada in Washington, D.C., relies on weddings for about half his business. He has 36 weddings under contract this year, including one that was recently cancelled after the bride was possibly exposed to the virus. Another wedding went from a large venue with 150 guests to a home ceremony with 20. A 10-hour day for Busada dropped to three hours of work.

Busada offered the couple who were forced to cancel a credit or postponement without penalty.

“Everybody’s struggling. It doesn’t do me any good to be the bad guy,” he said.

Leon Rbibo, president of The Pearl Source, an online jewelry company headquartered in Los Angeles, has been servicing the industry for more than 10 years.

He started seeing cancellations and requests for order delays in mid-January. It started with an uptick of about 5%, he said. Fast forward to late February, when such requests shot up to 15%. He projected March would end at closer to 17%, representing about $50,000 worth of business cancelled or postponed.

“We know these requests are related to concerns around the spread of coronavirus because our customer experience teams are trained to ask for the reason for cancellation or postponement,” Rbibo said.

At RentMyWedding.com, which provides everything from lighting to linens for thousands of couples across the U.S., orders for March have decreased by 24.3% compared with March 2019, said Marie Kubin, the founder and CEO in Miami.

“The majority of our clients place orders one to three weeks prior to their wedding,” she said. “The couples that are cancelling have said they plan to reschedule for the future, but they’re not going to choose a new date until they see how things shake out with the coronavirus. Many other couples with weddings happening in the next month are asking us to put their orders on hold because they’re not sure whether or not to go ahead with their weddings.”

Caterers are holding on with extra care.

Andrea Correale, president and founder of the Elegant Affairs catering and event firm in Manhattan, said she is doubling and tripling hand washing stations for workers, placing hand sanitizer in coat check and registration areas, and offering baskets of sanitizer on tables for guests.

She’s also creating more distance between guests at tables, so a round table that usually seats 10 is now set up for eight.

Large bottles and pitchers of juices and soda have become individual bottles, bartenders are wearing gloves and Correale has replaced communal bowls of bar snacks with individual bags, “so people can still graze and feel safe about it.”

——   The Associated Press receives support for health and science coverage from the Howard Hughes Medical Institute’s Department of Science Education. The AP is solely responsible for all content.