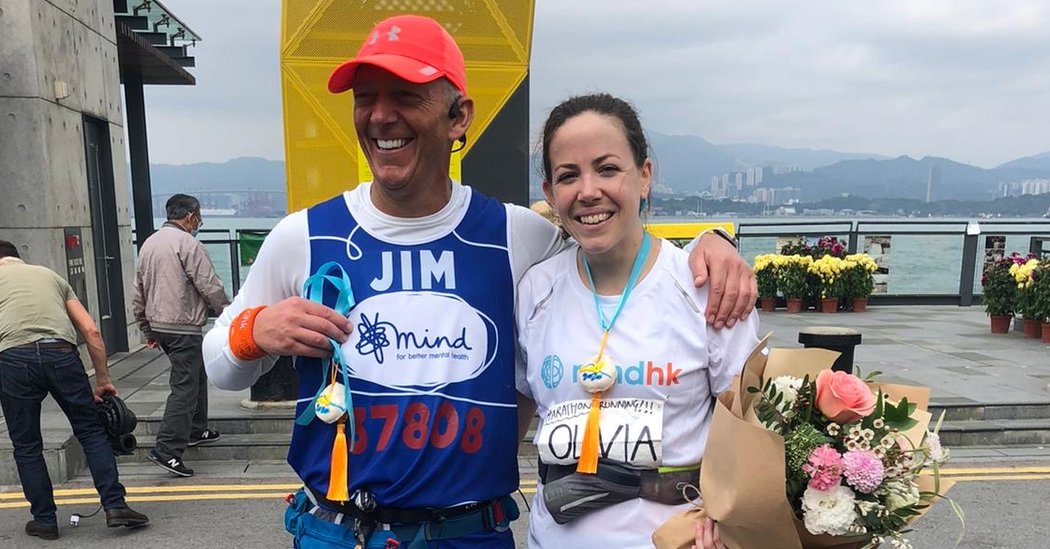 HONG KONG — I had just returned home from my 47th training run late in January when the text came in from a friend: “Marathon cancelled.”

I was crushed. I had been eagerly looking forward to running the Standard Chartered Hong Kong Marathon, scheduled for Feb. 9, but now it had been canceled because of health concerns related to the coronavirus outbreak.

It was my first marathon, and I had secured a place back in October, after sending a pleading email along with my application. I had slogged through most of the 16-week training plan for beginners that I had stuck to my wall and had been raising money for Mind Hong Kong, a mental health charity. After decades of hating running, I was finally beginning to feel like a real runner, obsessing about things like energy gels, running belts and motivational podcasts. My parents had been planning to fly over from Britain to cheer me on, but now they’d have nothing to cheer.

The cancellation was understandable. The race typically draws more than 70,000 runners, and the thought of that many heavily breathing people covering long distances in public is a precarious scenario when a contagious and life-threatening virus is spreading across the region.

Cancellations were also something we had become resigned to in recent months, in a city where almost every public event, including the New Year’s Eve fireworks and Clockenflap, Hong Kong’s biggest music and arts festival, had been postponed or canceled because of antigovernment protests. Coronavirus was simply the latest reason to call things off.

But I was still crushed. In the runners’ WhatsApp groups I had joined, more seasoned athletes were sanguine. “Run more races and will understand these things happen…,” one wrote. “Japanese marathons get called off four hours before the run” because of weather, consoled another. But this was my first marathon, I wanted to write back. How could you have forgotten how momentous everything feels when it’s your first marathon?

Very quickly, though, I decided I was going to run the distance anyway. I had already built up to 20 miles in training, and I wanted to know what it felt like to run the venerated 26.2. I wanted to make it worthwhile for all the friends and colleagues who had donated to my race charity.

I also determined that it was relatively safe. At the time the marathon was canceled, there were five confirmed cases and by the event’s scheduled date, there were 36. But people here are not required to be under quarantine unless they have recently visited mainland China, where many areas are under lockdown. Despite the uncertainty about how the virus spreads and the advice from Hong Kong’s Center for Health Protection to “stay at home as far as possible,” there are still a lot of people on the streets.

While all the swimming pools and public sports centers are closed, many gyms and workout spaces are open, though fewer people are showing up. Temperature checks are taken at entrances, and both hands and equipment have to be regularly sanitized. At least one yoga class has made face masks mandatory. Hiking remains a popular workout option for many people; Hong Kong, with its steep hills and network of trails, is great for that.

I went ahead and cobbled together my own messy 26.2-mile course to create my own marathon, using the GPS running app, Strava. I would run back and forth along Hong Kong’s waterfront, notable for its flatness, with the route ending conveniently close to a burger bistro near my house. Two other runners, friends who were also victims of the canceled marathon, were keen to join me, one to run the full course and another for a half marathon.

Over the next two weeks, I tapered my training, stocked up on gels, and tried to decipher the confusing information on the internet about what to eat in the last 24 hours before running.

I wore a surgical mask over my face on the walk to our made-up starting line in Golden Bauhinia Square, but ditched it once we set off. There was never any question of wearing a mask while running: They create a hot, stifling cocoon around your nose and mouth that makes it uncomfortable to breathe even when walking. While masks are uniform on public transport and in crowded places, you can still see the odd uncovered face in parks or more open spaces beside the sea. My route largely went through places like that.

The three of us started our run to a gong, not a starting gun. And while I didn’t have an official race T-shirt, I had my own unofficial version designed by the charity I was supporting, Mind Hong Kong, along with a hand-drawn bib that read “Please cheer.”

We had none of the whooping crowds that everyone says give you so much stamina on marathon day, but we did have a small band of friends, and their dogs, who appeared at unexpected spots along the way carrying motivational signs and yelling their support.

The streets were quiet at first but grew gradually busier, particularly near the ferry piers in the middle of the course, where we wove around oblivious passengers embarking and disembarking from the boats. In the harborside parks we ran past the usual assortment of families out strolling, people exercising and older Hong Kongers practicing tai chi. Despite my “please cheer” sign, no strangers offered vocal support for us. Maybe the message was too small to read, or they were simply mystified.

We encountered only one coronavirus-related issue during the run: In a hygiene blitz, the health authorities had taped black plastic over all the water fountains to avoid contamination risks. I had to ration my water supplies and probably ended up more dehydrated than I should have been.

But we were grateful that the toilet paper crisis that has engulfed the city since early February, when a rumor that supplies were running low prompted mass buying and caused a real shortage, had not extended to the public toilets on our route.

My friend and I finished our marathon together and were draped not with shiny medallions but with shortbread cookie medals that our friend had baked and tied on ribbons. And although our phone batteries died somewhere around the 23-mile mark, making it hard to tell if we actually ran slightly over or under 26.2 miles, it felt like a real marathon: painful, seemingly endless and exhilarating, in equal measure.

Olivia Parker is an editor on the International Edition of The New York Times, based in Hong Kong.