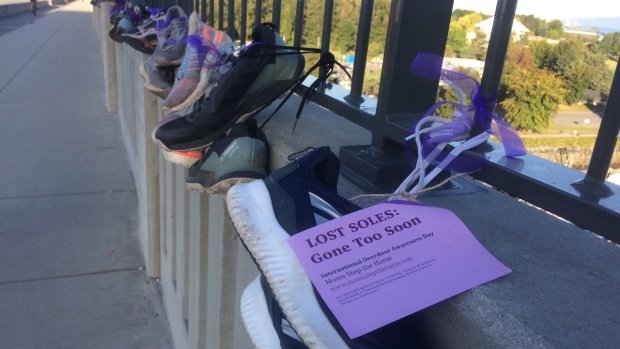 The awareness-raising art display, “Lost Soles: Gone Too Soon” is organized by Moms Stop the Harm and marks International Overdose Awareness Day on Aug. 31. It is but one of several events and displays planned in the city to honour lives lost to drug overdose deaths.

“(It’s) a visual display of all these people who will never be walking across the Burrard Street Bridge again — it might help inform people of just how many people (we) are losing,” said Deb Bailey, an organizer for the group.

B.C. is facing dual health emergencies, with one – the COVID-19 pandemic – compounding the tragedies of the other – the drug overdose crisis. Since the start of the pandemic, the province’s illicit drug supply has become even more toxic, resulting in more overdose deaths.

Jennifer Cooper, who lost her brother Paul to an overdose, was among those tying the shoes to the fence on Sunday morning.

“He was the most special guy within the family in terms of, tons of personality and wonderful sense of humor and always put others before himself,” she said of her brother.

That the shoes are attached to a bridge is particularly fitting: Paul was an ironworker who helped build iconic structures throughout the province, including BC Place stadium and the Alex Fraser bridge.

Paul was Cooper’s youngest brother – she had three – and she says he took his own life by an intentional overdose in 1996, on the eve of his 40th birthday.

“He couldn’t handle it anymore. He felt he was a disappointment to my mom and dad. We had tried for years, he had gone through over seven formal recovery programs to try to kick the (addiction),” she said.

Since retiring from teaching, Cooper says that she is finally able to engage in overdose awareness advocacy beyond making donations. Still grieving her brother nearly a quarter-century later, Cooper joined Moms Stop the Harm last month.

To “finally honour my brother” with the bridge display felt “wonderful,” she said.

Other events around Vancouver for the overdose awareness day include the painting of an interactive mural at Carnegie Community Centre by local artist Smokey D where people can add the names of their lost loved ones, a billboard at West Pender and Abbott streets showing the faces of people killed by overdoses, and a live-streamed candle-lit vigil.

Of the current overdose crisis, Cooper said the drug supply “needs to be safer. The stigma has to end. People need to rethink what we do.”

Karen Ward, a safe-supply and drug policy advocate who works and lives in Vancouver’s Downtown Eastside said she hopes the day sparks empathy among those who look down on drug users or are dragging their feet on taking action.

“International Overdose Awareness Day is a heart wrenching and difficult (time),” she said.

“It’s not just because (the people who died) were related to people who still exist. It’s because they were people in themselves, full and complete human beings when they were alive … (and) because we are still here right now we don’t have to wait to be dead to recognize they were human.”

Advocates, health officials, police chiefs, policy experts and even politicians have advocated for the decriminalization of illicit drugs and for a safe supply.

In July, B.C.’s premier John Horgan wrote to Prime Minister Justin Trudeau and urged him to decriminalize illicit drug possession for personal use.

In August, the federal government announced several steps towards addressing the crisis, including instructing federal prosecutors to only criminally prosecute the most serious drug possession offences and to find alternatives outside the criminal justice system for the rest.

While some advocates applauded the step, they said it’s not nearly enough.

There have been more than 15,000 apparent opioid-related deaths in Canada since 2016.

B.C. has recorded more than 5,000 deaths from illicit drug overdoses since declaring a public health emergency in 2016.

With files from The Canadian Press.