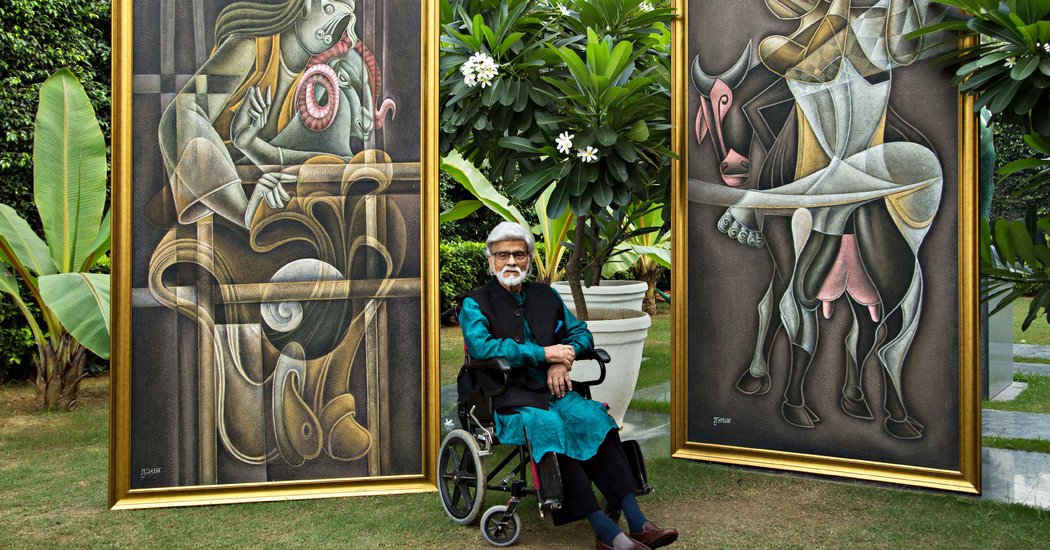 Satish Gujral, one of India’s best-known artists, was always game to try something new.

His early paintings reflected the violence and displacement that accompanied the partitioning of India in 1947 into the countries of India and Pakistan. Later he switched to murals and sculpture. He painted some portraits. And, though not formally trained as an architect, he designed notable buildings, most famously the Belgian Embassy in New Delhi.

His exploratory spirit was evident on a more personal level as well. In 1998, when he was in his 70s, Mr. Gujral went to Australia to receive a cochlear implant so that he might hear again, something he had not experienced since a childhood illness left him deaf.

“I have lived life to its fullest,” he told The Australian at the time, “and I will continue to live it to the fullest possible.”

But, just as his artistic explorations were not always successful, the procedure turned out to be not quite what he had hoped.

The implant did not instantly restore a functional sense of hearing as most people think of it; rather, it delivered what Mr. Gujral called “a jumble of noise,” and it presented a long-dormant part of his brain with the difficult challenge of reprogramming itself to hear.

“I was like a child learning the world for the first time,” he told India Abroad in 2004. “It was very troublesome: You hear something and try to identify it. And the sounds! If a car door closed a block away I could hear it. A normal person learns to filter sounds; I could not.”

And so, two years after getting the implant, he had it removed.

“The exercise of learning to identify different sounds left me with no time to paint,” he explained to the newspaper The Indian Express in 2011. “I asked myself if I wanted to be a ‘hearing person’ or a painter.”

“He was admired for his creativity as well as the determination with which he overcame adversity,” India’s prime minister, Narendra Modi, said in a statement. “His intellectual thirst took him far and wide, yet he remained attached with his roots.”

Mr. Gujral was born on Dec. 25, 1925, in Jhelum, in what is now Pakistan but at the time was in the province of Punjab in British India. When he was about 9, he was injured in a fall at the Lidder River in Kashmir, and an infection set in that cost him his hearing.

“In those days there was no help for a deaf child,” he told the newspaper News India Times in 2002, and his educational opportunities were constricted.

“I couldn’t hear any sound, but I had stored the sounds of Punjabi and Urdu in my head,” he said. “There were no books for children in Punjabi, so I read books meant for adults.

“I learned to read English from the printed page,” he added, “so I sometimes made up the pronunciation in my own fashion.”

(Mr. Gujral’s speech was sometimes hard to understand; in adulthood his wife, Kiran, would interpret for him when necessary and augment his lip reading. “She has become a bridge for me with the world,” he said in a video interview with Art Talk posted in 2011.)

In 1939 he was admitted to the Mayo School of Industrial Art in Lahore, and he later studied at the J.J. School of Art in Mumbai.

He was in his early 20s and had a graphics studio in Lahore when the country was partitioned; during that tumultuous, violence-filled time, he and his family emigrated from Lahore, now in the newly created Pakistan, to Delhi. Many of his early paintings, full of anguished figures, reflected the turmoil.

“He was probably the first person after the Partition to have painted the sorrow of it, with women crying and so on,” the artist Krishen Khanna, a contemporary and longtime friend, wrote after his death in a tribute for India Express. “His work stands out very much as somebody who was hurt.”

In 1952 Mr. Gujral received a scholarship to study with the Mexican muralists Diego Rivera and David Alfaro Siqueiros. Some of the resulting works were exhibited in 1954 at New India House in New York.

“There is passion and deeply felt emotion in these paintings of refugees and victims of war and rapine reflecting the severing of India and Pakistan,” Howard Devree wrote in The New York Times.

Later in the 1950s, returning to India, he painted portraits of, among others, Jawaharlal Nehru and other leading political figures. (Mr. Gujral’s brother, Inder Kumar Gujral, would become such a figure himself, serving in numerous government posts, including a year as prime minister in the 1990s.)

By the early 1960s Mr. Gujral was making paintings of evocative spaces, many featuring lone figures amid windowless buildings.

“This dark, parched environment is part of a locked-in world,” Brian O’Doherty wrote in The Times, reviewing a showing of these works at ACA Gallery in Manhattan in 1961, “in which figures and buildings stand among the soundless fall of shadows, so that our inspection seems like a trespass.”

Later in his career he made large murals in mosaic and ceramic tile, as well as sculptures of all sorts in a variety of materials, including steel, copper and burnt wood.

He also designed a number of buildings, both in India and abroad. His signature architectural work, the Belgian Embassy, a fortresslike complex in brick that was one of his earliest architectural works, was constructed from 1980 to 1983 and has been widely praised.

“I had not thought of architecture in intellectual terms,” he said of the project. “I just designed it through some kind of instinct, and when I had finished I still did not know what I had done. As always with creative work, an artist is himself surprised by what he had produced.”

In addition to his wife, whom he married in 1957, Mr. Gujral’s survivors include two daughters, Alpana and Raseel, and a son, Mohit. His brother died in 2012.

In a 2003 interview with The Tribune of India, Mr. Gujral talked about how his brief experience with the cochlear implant had influenced his painting, resulting in works that blended the abstract and the figurative.

“I have used overlapping images more,” he said. “It’s not that I have not used them before, but more so now. The use of the figurative and the abstract is joined together, but neither the figure nor the concept is obliterated even partially.

“You can see the outline of one behind the other clearly. It’s like my memory of sound. It is there, and it is not there.”