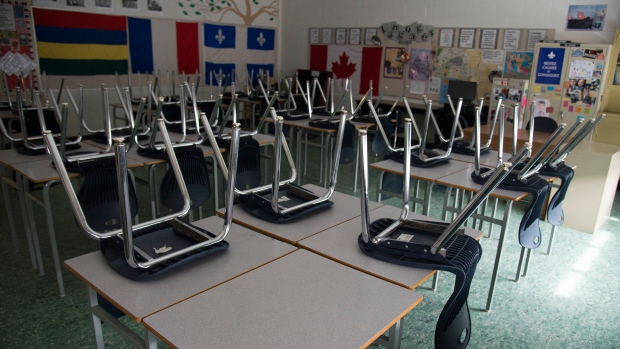 TORONTO — The results are in for a Canadian study that was designed to answer the question on the lips of every parent, teacher and student: How safe are schools when it comes to COVID-19 transmission?

More than 1,700 staff and teachers in the Vancouver School District were tracked for three months, their blood tested, looking for COVID-19 antibodies that would show that they had been exposed.

The study authors say their results, which were released today, found that infection rates were no greater among staff than other adults in the general public.

“The science suggests that that the risk of secondary transmission in schools is low, low,” Dr. Pascal Lavoie, a pediatrician and associate professor at the University of British Columbia, as well as one of the study’s authors, told CTV News.

It’s a timely study, as officials across Canada are looking to decide whether or not to reopen schools next fall, and what that reopening could look like.

Seven staff in the study were infected, likely from community contact with a friend or relative, the study found.

Only five staff appeared to have been infected at school.

“Antibodies are a sign that someone has had an infection in the past,” Lavoie explained. “And once you had a COVID infection, antibodies will stay up for at least a year, maybe longer. So it’s a sensitive way to detect all cumulative previous infections.

“That was trying to address the question, ‘Could there be a layer of asymptomatic infection we’re not detecting in schools?’”

Lavoie said that the results showed that the risk of being in a physical school that was taking COVID-19 precautions was essentially the same risk of “just living in a community,” even when accounting for asymptomatic transmission.

“The level of infection in the population of school workers or school staff that we looked at in the Vancouver School District is equivalent to the infection rate in people not working in schools, but living in the same community, same age and same sex and so on.”

“I couldn’t find any scientific justification for closing schools based on a safety concern,” Lavoie added.

B.C. is one of the few regions in the country that didn’t shut down all schools wholescale during outbreaks, but instead encouraged masks and handwashing while keeping many open.

“It’s important to mention that our study was done in the context of COVID mitigation measures,” Lavoie said.

Dr. Saba Merchant, a pediatrician from Ontario, says the data in support of keeping schools open is strong.

And she says that kids are feeling the effects of school closures weighing on them.

“The social isolation that comes from taking away structure and routine from a child’s day by them not being in school has significant impact on their mental development,” she said.

The findings from this new study could likely have the biggest impact in Ontario, which has closed schools for some 25 weeks since the pandemic began — a longer stretch than any other jurisdiction in Canada.

As one of the provinces hardest hit by the pandemic, the measure has been seen as necessary by some, and too harsh by others.

Rebecca Lafleur, a mother of four kids, told CTV News that the study echoes what she believed all along.

“It confirms my suspicions that school is safe, because that’s what we were told in the beginning,” she said.

Other parents have expressed disappointment that the schools have been closed for so long in some regions.

Susan Cosgrave said her son had to graduate grade eight without being able to see his friends in person.

“I mean, it’s a tough call,” she said. “I certainly don’t envy the people in our government and leadership having to make these tough decisions. I think at the end of the day, they’re trying to keep people safe.”

Teachers groups are still wary, saying that one study alone does not fully address their fears.

“There have been so many contradicting reports and studies over the last number of months that it’s hard to have absolute faith in any study that you’re going to read,” Karen Littlewood, incoming president of the Ontario Secondary School Teachers’ Federation, told CTV News.

She added that she is “a little relieved” by the results of the study, but is still concerned about what reopening will look like.

“We’re really concerned going forward about the supports that are going to be in place in the fall,” she said. “In Ontario, [we] don’t have a definitive answer as to what the return is going to look like in September.”

She pointed out that the conversation shouldn’t just be about vaccination, but ensuring that schools are as safe as possible, through things such as PPE, ventilation and smaller class sizes.

“There are some schools that don’t even have the ductwork that they would need to [improve ventilation], so it’s going to be significant cost,” she said, adding that time is running out to fix these problems over the summer.

“We have to be able to plan for a safe return for all.”

While the study is a positive step forward, it is limited by only testing adults. While teachers and staff are much more at risk if they contract COVID-19 than their students, as teenagers and children are very unlikely to have severe outcomes from the virus, there have been hospitalizations and fatalities among this group as well. As of June 18, there have been 165 children under the age of 19 who have been admitted to the ICU at some point during the pandemic due to COVID-19.

“And every single time it happened, I didn’t sleep, I was worried, I was beyond belief,” she said.

Lavoie said with the study showing little transmission in the schools themselves, the focus should be not on closing schools, but making them safer and boosting vaccination.

“I think that’s where we should focus our effort rather than closing schools again,” Lavoie said. “So trying to get as much vaccination among school staff […] and then encouraging coverage among students as well.”

The delta variant is still a looming concern, but the scientists behind this new study say they’ll have an updated study on variants soon in order to further guide provinces looking to reopen schools in the fall.