You Are Here Home Health News Science Offers Sunlight as Way to Tame Virus, and Trump Rushes Toward It 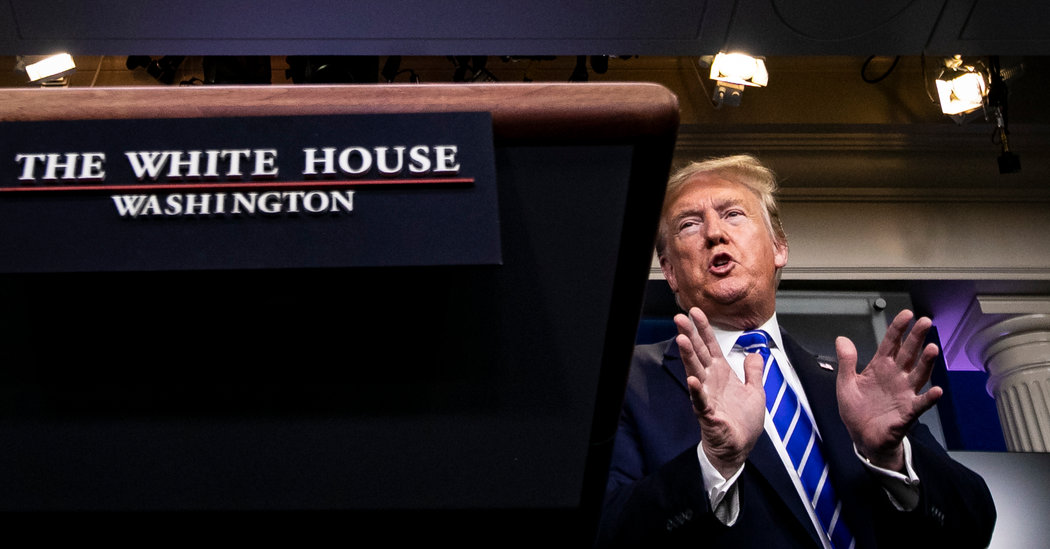 President Trump has long pinned his hopes on the powers of sunlight to defeat the Covid-19 virus. On Thursday, he returned to that theme at the daily White House coronavirus briefing, bringing in a top administration scientist to back up his assertions and eagerly theorizing — dangerously, in the view of some experts — about the powers of sunlight, ultraviolet light and household disinfectants to kill the coronavirus.

After the scientist, William N. Bryan, the head of science at the Department of Homeland Security, told the briefing that the government had tested how sunlight and disinfectants — including bleach and alcohol — can kill the coronavirus on surfaces in as little as 30 seconds, an excited Mr. Trump returned to the lectern.

“Supposing we hit the body with a tremendous — whether it’s ultraviolet or just very powerful light,” Mr. Trump said. “And I think you said that hasn’t been checked, but we’re going to test it?” he added, turning to Mr. Bryan, who had returned to his seat. “And then I said, supposing you brought the light inside the body, either through the skin or some other way.”

Apparently reassured that the tests he was proposing would take place, Mr. Trump then theorized about the possible medical benefits of disinfectants in the fight against the virus.

“And then I see the disinfectant where it knocks it out in a minute — one minute — and is there a way we can do something like that by injection inside, or almost a cleaning?” he asked. “Because you see it gets in the lungs and it does a tremendous number on the lungs, so it would be interesting to check that.”

Experts have long warned that ultraviolet lamps can harm humans if used improperly — when the exposure is outside the body, much less inside. But bottles of bleach and other disinfectants carry sharp warnings of ingestion dangers. The disinfectants can kill not only microbes but humans.

Yet despite a lack of scientific evidence, Mr. Trump has long pinned his hopes on an array of possible cures for the coronavirus, from sunlight and warmer temperatures to an array of drugs, including the malaria drug hydroxychloroquine, which he has promoted as a “what have you got to lose” remedy.

Shortly after Mr. Trump made his latest comments on Thursday, emergency management officials in Washington State posted a warning on Twitter against following the president’s suggestions.

“Please don’t eat tide pods or inject yourself with any kind of disinfectant,” they wrote, before urging the public to rely only on official medical advice about Covid-19. “Just don’t make a bad situation worse.”

When a reporter suggested that Mr. Trump’s proposed treatments might be dangerous, letting “people think they would be safe by going outside in the heat considering that so many people are dying in Florida,” Mr. Trump pivoted to another of his regular briefing themes: attacking the news media.

“Yeah, here — here we go,” he began, clearly irritated. “The new headline is, ‘Trump asks people to go outside, that’s dangerous.’ Here we go same old group. Are you ready? I hope people enjoying the sun, and if it has an impact, that’s great.”

Seeking affirmation of his opinion, Mr. Trump turned to Dr. Deborah Birx, the White House coronavirus response coordinator. He asked if she had heard of the success of sunlight as an effective tool against viruses, and more specifically the coronavirus.

“Not as a treatment,” Dr. Birx replied. “I mean, certainly fever is a good thing when you have a fever. It helps your body respond. But not as — I have not seen heat or ….”

As the pandemic has spread to countries experiencing hot weather, including Australia and Iran, some groups have investigated whether the warmer summer season would slow the virus. Early this month, a committee of the National Academy of Sciences looked exclusively at humidity and temperature and found that they would have a minimal impact on the virus.

In his remarks, Mr. Bryan told the briefing that the novel coronavirus dies rapidly when exposed to sunlight, high temperatures and humidity. He cited experiments the agency had conducted at a high-security laboratory in Frederick, Md.

The sunlight finding was no surprise to life scientists who, for many decades, have reported that ultraviolet light — an invisible but energetic part of the sun’s electromagnetic spectrum — can damage DNA, kill viruses and turn human skin cells from healthy to cancerous.

For public health, the big challenge is widening such narrow laboratory findings so they take into account how the global environment and its changing weather and endless nuances can impact the overall result — most especially on the question of whether the virus that causes Covid-19 will diminish in the summer. This week, a pair of ecological modelers at the University of Connecticut reported evidence that balmy weather may indeed slow the coronavirus, but not enough to do away with the social-distancing measures advised by public health officials.

The inherent limitations of lab studies were driven home on April 7 in a letter to the White House from a National Academy of Sciences panel looking into research on the coronavirus. “With experimental studies,” the panel said, “environmental conditions can be controlled, but almost always the conditions fail to adequately mimic those of the natural setting.”

CDC: Covid-19 death toll is twice as high among people of color under age 65 as for white Americans