You Are Here Home Health News Should a Study on Pesticides Affect Our Use of Them? 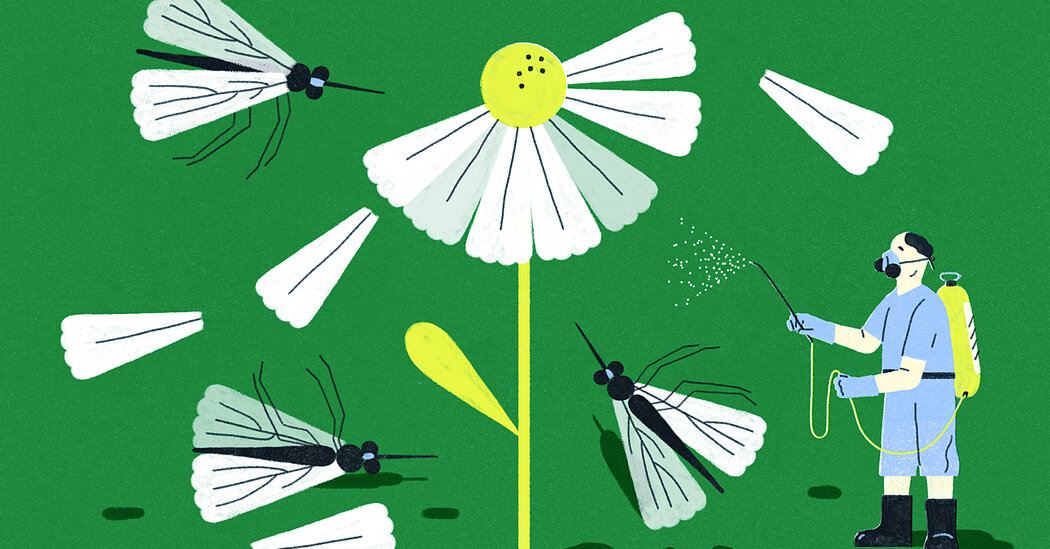 With summer here and more people choosing to escape their coronavirus prisons into yards, parks, woods and streets, a recent study suggests yet another potential health risk, albeit one far less concerning than the virus: exposure to pyrethroids, a major group of insecticides widely used to protect against everything from malaria parasites and West Nile virus to bed bugs and ticks, as well as a host of agricultural and garden pests.

The study, which found a link between pyrethroids and deaths from heart disease, is itself a cautionary tale, one that can help you better understand the implications and limitations of epidemiological research.

Pyrethroids, as leading components of both indoor and outdoor insecticides, are the second most widely used pesticides in the world, after chlorpyrifos. They are generally considered harmless to people and pets in the concentrations needed to protect them from disease-carrying critters with six or eight legs. They are derived from compounds called pyrethrins, found naturally in the flowers of chrysanthemums.

But just because the origin of pyrethroids is natural doesn’t necessarily mean they’re safe, especially if people are chronically or repeatedly exposed to them. Almost any substance can be a potential hazard — the dose does indeed make the poison.

In laboratory studies, pyrethroid doses far greater than people would normally encounter have caused inflammation, DNA damage and oxidative stress. These effects may or may not happen in people, but they suggest the new findings could be biologically plausible. Also, limited studies in people have found links to impaired neurological development, reproductive health and major diseases like diabetes, Parkinson’s disease and cardiovascular disease.

With such possible risks in mind, a team of epidemiologists at the University of Iowa College of Public Health examined the long-term effects on mortality of pyrethroid exposure among a nationally representative sample of 2,116 American adults who participated in the National Health and Nutrition Examination Survey, known as NHANES, from 1999 to 2002.

This ongoing study gathers extensive questionnaire data from participants, all of whom are interviewed in person. It includes health examinations and collects blood and urine samples for laboratory tests. The samples are frozen and can be used to provide data for studies years later.

By the end of 2015, 246 of the participants in the Iowa study had died. The research team, led by Dr. Wei Bao, reported in JAMA Internal Medicine that, compared with those least exposed, participants found to have the highest levels of exposure to pyrethroid insecticides were three times more likely to die of heart disease and one-and-a-half times more likely to die of any cause during the follow-up period.

Exposure was assessed by measuring urinary levels of a metabolite of pyrethroids called 3-PBA, found in two-thirds of the people studied. These chemicals are normally rapidly excreted, so finding them in so many individuals indicates that most people are chronically or repeatedly exposed to pyrethroids.

But before you toss out your personal supply or refrain from stocking up on pyrethroid-containing products to protect yourself, your family and your pets from hazardous pests, consider the full implications and limitations of the new findings and the trade-offs involved in avoiding these valuable insecticides.

In a commentary in the journal, two experts at the Columbia University Mailman School of Public Health cautioned against overinterpreting the results of the new study and leaping to potentially unwarranted conclusions about the long-term safety of pyrethroids. Steven D. Stellman, an epidemiologist, and his wife Jeanne Mager Stellman, a health policy expert, pointed out that the participants were relatively young — aged 20 to 59 — when they entered the study and supplied samples of their blood and urine. When the study ended, they were, on average, 57 years old, a rather young age for measuring cardiovascular deaths, the commentators noted.

“Other than cigarette smoking, few, if any, chemical exposures are known to trigger a threefold increase in the risk of death from heart disease, especially in persons younger than 60 years,” the doctors wrote, adding that other, as yet unknown, factors could account for the increased risks the study found.

Indeed, many public health scares from observational studies have turned out to be false leads when studied more thoroughly. A classic example was an alarming report in the 1990s of an increased incidence in breast cancer among women living on Long Island, N.Y., that some blamed on exposure to persistent environmental chemicals like DDT and PCBs.

However, Dr. Steven Stellman told me, about 30 subsequent and more thorough studies found no evidence that linked the chemicals to breast cancer on Long Island. “It’s important to know if the scientists reporting the results of observational studies have an agenda,” he said.

Dale Sandler, epidemiologist at the National Institute of Environmental Health Sciences, said the pyrethroid report is intriguing and should prompt other researchers to look into their own data. “But the study was small, it couldn’t account for a lot of possible factors like where people lived, the participants were young, and only one biomarker was measured, so the findings are difficult to interpret,” Dr. Sandler said in an interview.

In other words, one study does not a fact make, not then, now or in the future. The Iowa team itself concluded, “Further studies are needed to replicate the findings and determine the underlying mechanisms.” It is possible, they wrote, that “pyrethroid exposure occurs simultaneously with exposure to other common pesticides” or that other unmeasured or unrecognized factors account for the findings.

Theirs was an observational study that by itself cannot prove cause and effect. Rather, such studies can generate leads or raise new questions that warrant a closer look. But they don’t prove that pyrethroids, as currently used, are a health risk to people.

“You need a lot of studies to establish that an exposure actually causes a human health problem,” Dr. Steven Stellman said. As thorough as the Iowa researchers tried to be, he explained, “There are thousands of variables that were not measured, including psychological factors, that could influence the risk of coronary heart disease. The research is limited by the questions that were asked in NHANES 20 years ago.”

Furthermore, Dr. Stellman added, even if some risk to cardiovascular health might result from pyrethroid exposure, that does not mean the chemicals should be abandoned without considering other health benefits, like their “enormous potential to save lives from malaria and West Nile disease. In the grand scheme of things, there’s not enough known to make a definitive pronouncement of risk.”