You Are Here Home Health News Should wearing a mask in public be mandatory? 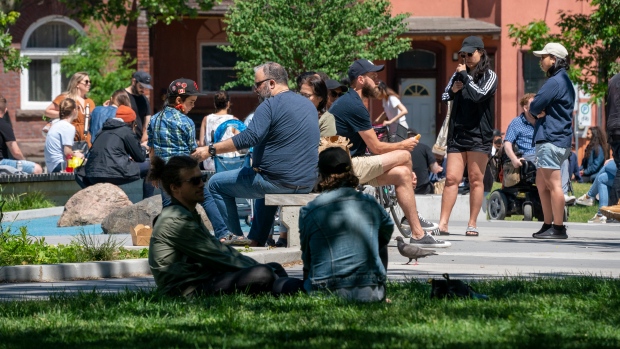 TORONTO — As Canada gradually reopens, should wearing a mask be mandatory in public?

That’s the recommendation of a group of Canadian doctors and scientists who are urging lawmakers to make wearing a mask a requirement in busy public spaces, including schools, shops, crowded parks and public transit. But other experts say making masks mandatory may not be the right solution.

Dr. Amy Tan, a family doctor in Calgary supporting the Masks4Canada campaign, says the group wants to see 80 per cent of Canadians wearing masks in public, a figure that research suggests can significantly reduce infection rates.

The campaign is national, but Tam said mandating masks is essential in Canada’s three hardest-hit provinces — Ontario, Quebec and Alberta — which account for more than 94 per cent of the country’s total cases.

Polling suggests Canada is falling short of that 80 per cent figure, Tan says, pointing to a recent Leger survey that suggested 48 per cent of Canadians are wearing masks in public.

“Unfortunately, we are finding that mask wearing rates are not at the rate where the full community will be protected,” Tan said.

WHERE TO WEAR A MASK

When it comes to requirements around wearing a mask in Canada, the rules are a bit spotty.

Many public transit authorities recommend or require that passengers wear masks, including in Vancouver, Ottawa, Toronto, Hamilton and Guelph.

Anyone who travels by plane in Canada is required to wear a cloth face mask, following an order from Transport Canada in April, and airlines must provide masks to passengers who don’t have their own, depending on available supplies.

Ride-hailing apps Uber and Lyft have both made wearing masks mandatory for both drivers and passengers.

A few small municipalities have gone so far as to mandate masks in public spaces, including the Montreal suburb of Côte Saint-Luc, where people who don’t wear a mask in a business or city-owned building can face fines between $100 to $500.

Public health authorities in Wellington-Dufferin-Guelph in Ontario introduced similar rules prohibiting people from entering businesses without a face mask, with fines of up to $5,000 for those who don’t comply.

Tan said she doesn’t want to see restrictive rules that punish people who don’t wear masks, and her group specifies that the rules should not apply to children under the age of two or individuals with health complications who can’t wear masks.

“We are not calling for harsh penalties like tickets or fines or trouble with the legal system. For places of work, we’re not asking for disciplinary action if one doesn’t wear a mask,” she said.

“What we’re asking for is appropriate educations. We’re all in this together in it being about the community protecting each other through these extraordinary times.”

Dr. Michael Curry, an emergency physician in Delta, B.C., said making masks mandatory should only be done in situations where physical distancing is not possible.

“It’s probably helpful, but really it should be secondary to physical distancing,” Curry told CTVNews.ca in a phone interview Thursday.

He said it makes sense to wear a mask in densely packed areas such as planes, public transit, Ubers and elevators, but that any rules governing those spaces need to be clearly communicated.

Tom Koch, an adjunct professor at the University of British Columbia who studies geography, medicine and ethics, said masks are an essential tool in fighting the virus but that, unless an outbreak is rampant, strongly encouraging people to wear masks may be the best approach.

“Whether they are mandatory or not depends in part on the severity of the outbreak in a particular place,” Koch said.

“I’m in Vancouver today where the numbers have been quite low. On the transit I’d say 50 per cent of the riders were not wearing masks. In Toronto the percentage is higher but then, so is an awareness of numbers.”

Earlier this week, Ontario Premier Doug Ford rejected calls from the mayor of Markham, Ont., to make wearing masks mandatory in public spaces. Mayor Frank Scarpitti, whose region borders Toronto, expressed concern that the province could see a spike in cases without such rules.

“We have to encourage people,” Ford told reporters on Tuesday. “We just don’t have the manpower for bylaw and police officers to be chasing people without masks.”

Several American states, including California, Michigan, New York, Maine, Delaware and Maryland, have issued orders that make wearing a mask mandatory in certain public spaces. So far, no Canadian province or territory has gone that far.

In her work as a family doctor, Tan said she has seen her patients confused by the rules on masks.

“For the first couple months, it didn’t matter what I was talking to patients about, a level of COVID education was happening with regard to what physical distancing was, how to clean things, wherever or not masks are helpful,” she said.

More than 800 people have pledged support for Masks4Canada’s campaign. While keeping Canadians safe is the top priority, mandating masks could simultaneously help boost the economy in these turbulent times, Tan said.

“Our appeal is to prevent disease and illness in people, but it’s also really to protect the economy at the same time,” she said.

Doctors looking into rare cases of myocarditis after mRNA vaccinations