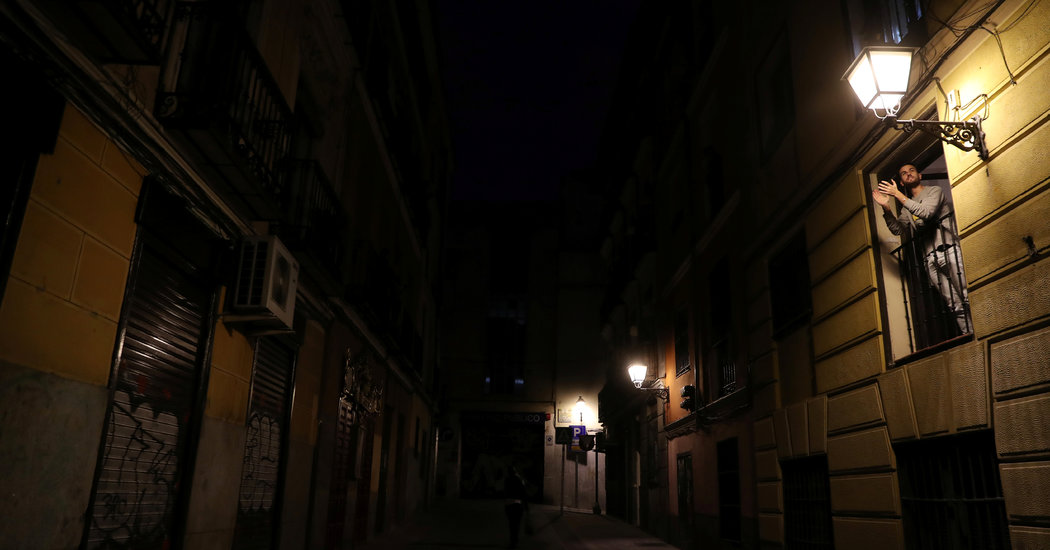 The idea took root after Jenni Spinner and her wife, Rebecca Kell, watched videos of Europeans, homebound because of the coronavirus, get on their balconies and sing to raise their spirits in the face of crisis.

Wouldn’t it be neat, they mused, if they could get the residents of their Chicago apartment building to do something similar?

Ms. Spinner said she figured a handful of friends might be game for a karaoke-style communal singalong to “Livin’ on a Prayer” by Bon Jovi, which they said was easy to sing and well known. Thus, a Facebook event page for a “Chicago-Wide Window Sing-a-Long” on March 21 was born.

Three days before it was set to take place, 100 people responded that they either planned to participate or were interested in doing so. By the night of the event, that number had swelled to 19,000.

“It kind of blew up,” Ms. Spinner said on Monday. She said she and Ms. Kell were planning another singalong for Saturday; this time the tune will be “ABC” by the Jackson 5. She said they would probably continue the singalongs every Saturday until the crisis has lifted.

The impromptu musical performances springing up in some of America’s largest cities appear to have started in Italy, which has been ravaged by the outbreak.

Italians sang their national anthem from windows and balconies. Some played the violin and others clanged pots and pans. In Florence, the opera singer Maurizio Marchini serenaded the city from his balcony.

Much the same way that Italians joined in song to show their solidarity, Chicago and Dallas residents under stay-at-home orders sang from their apartment windows and balconies.

In downtown Dallas on Friday, residents joined in a rendition of the Bill Withers classic “Lean on Me.” In New York City, a video showed apartment tenants singing tunes like “Yellow Submarine” and “My Girl.”

In other cities, residents have taken out musical instruments to play, while others have joined “virtual parties” on Instagram hosted by a notable DJ and “attended” by headliners like Drake, Naomi Campbell and Sean Combs.

Raising your voice in song with others can be an intimate shared social experience — and the song choice matters little, said Steve Waksman, a professor of music at Smith College in Northampton, Mass., about 100 miles west of Boston.

“Why do we sing at sporting events? Why do we sing in churches?” he said on Monday. “There is something distinctly communal about singing in harmony. It’s like touching someone without touching them.”

Staying away from others is the prime directive of health officials who are imposing more restrictions to help curb the pandemic.

But what better way to connect with others — from a distance — than through song?

Colin Boyle, a photojournalist, covered the Chicago singalong for Block Club Chicago. He stood in the courtyard of the U-shaped apartment building of about 50 units where Ms. Spinner and Ms. Kell live.

“As it gets close to 7 p.m., people started singing and other people started looking out their windows, ‘What’s going on? What’s this singing?’” he said.

A Chicago classic-rock radio station also played the song at the appointed hour.

Ms. Spinner said she and Ms. Kell were singing loudly, so she could not be sure how many others participated, but she was struck by how it brought tenants together.

She described looking out the window: “There are people you rarely talk to hanging out their window and you go, ‘Hey, there you are.’”

“In these trying times I am with you with all of my heart and my soul, sending my love to everybody in Chicago and across America,” he said in the post. “Sing it out, baby. We’re all going to come through this together. Be strong.”