You Are Here Home Health News Six-month checkup: How Canada and the world are faring against the novel coronavirus 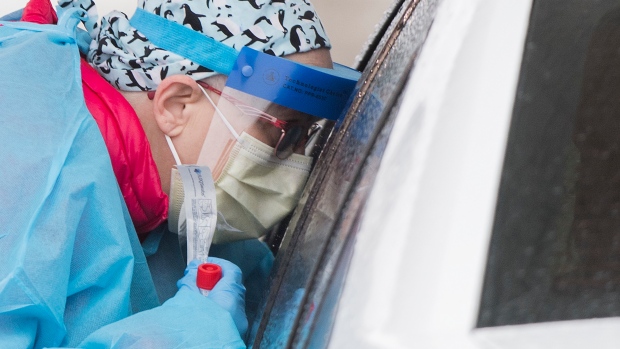 TORONTO — A spokesman for the World Health Organization (WHO) says Canada is seeing success in battling back the novel coronavirus, but the faster-rising infection numbers around the world could pose trouble here, too.

“The curve is going up, globally, not down, despite the efforts and the successes in many countries,” the WHO’s Christian Lindmeier told CTV News Channel on Sunday.

Lindmeier’s comments came shortly after the world surpassed 10 million confirmed cases of COVID-19, according to a tally by Johns Hopkins University, and following a week in which the global health agency repeatedly warned that the pandemic is accelerating.

This week marks six months since Chinese health authorities first notified the world about a mysterious cases of pneumonia in Wuhan, in what is now considered the first evidence of the existence of the virus.

It wasn’t until April 2, more than three months later, that the world hit one million cases of COVID-19. The five-million mark was surpassed seven weeks later, and it took only a little over five weeks for the next five million cases to be detected – backing up the WHO’s claim that the pandemic situation is worsening on a worldwide basis.

Lindmeier said this acceleration should stop Canadians from thinking the battle has been won just because the curve here is relatively flat at the moment.

“It doesn’t help if one country is doing great and another is not,” he said.

“No country is in this alone. We have to fight this all together.”

The COVID-19 map looks a lot different today than it did even three months ago, when Canadians were waking up to the realization that business and school closures weren’t going to be short-term measures.

Forget about China, Italy and New York. If you want to know where the novel coronavirus is wreaking the most havoc now, focus on Latin America, India and Arizona. And Florida. And Texas. And some other southern states.

The U.S. is hitting record highs in its daily new case counts, largely driven by skyrocketing totals in states that had been among the first to reopen schools and businesses. Many aspects of life in these states are once again being closed, including bars in Texas and beaches in the Miami area.

Dr. Matthew Oughton, director of the infectious disease training program at McGill University Health Centre, told CTV News Channel on Sunday that these states had removed their lockdown-like measures “far too soon, before they were even close to having flattened their curve,” which directly caused the current high caseloads.

“This allowed lots of opportunities for the virus that was still there … to spread expotentially,” he said.

Dr. Ronald St. John, the first director-general of the Public Health Agency of Canada’s Centre for Emergency Preparedness, told CTV News Channel on Sunday that part of the blame for the escalating numbers lies with states being allowed to largely direct their own responses to the virus, without a strong overarching federal plan.

“There is no cohesive control across all of the different states,” he said.

While several southern states appear to be faring worse than the rest of the U.S. in repelling the virus, it is clear that COVID-19 remains a national problem. Only two states are reporting lower numbers of new cases than they were last week: Connecticut and Rhode Island.

Outside the U.S., the highest numbers of new daily cases are now being reported in India, Russia and Mexico. The Middle East, South Asia and Central and South America are heavily represented in the list.

St. John said that Peru is “having a terrible time” dealing with the virus and described the situation in Brazil as “almost chaotic.” Brazil’s president, Jair Bolsonaro, was ordered by a judge this week to wear a face mask in public.

Many European countries, meanwhile, have successfully flattened their curves and slowly reopened their societies. There has even been talk of reopening Europe to travellers from outside the continent – although at this point, it does not appear Americans will be among those allowed in.

The return of global travel poses another problem, as experts believe some asymptomatic COVID-19 patients will surely slip through the screening and unwittingly spread the virus into areas from which it had virtually been eradicated.

“We will have to be putting out fires all over the place.”

St. John said managing these outbreaks effectively will involve countries disclosing every time they learn of a new case, even though doing so will discourage other tourists from visiting. He pointed to China’s new lockdown affecting nearly 500,000 people outside Beijing, due to new cases linked to a wholesale food market, as a good example of this.

“That’s the kind of thing that we’re going to see, in different places at different periods of time,” he said.

Overall, China’s curve has remained relatively flat since March, with all of the new outbreaks being isolated in order to prevent them from suddenly ramping up the number of new cases. South Korea, another early COVID-19 hotspot that quickly got a handle on the virus, is now dealing with fears of a second wave amid new daily case counts in the dozens.

Lindmeier said it is still too early to determine when a second wave of the virus might hit or how severe it might be. However, he said that case levels increasing as countries reopen is to be expected, and should not be seen as a reason to return to blanket lockdowns.

CANADA VS. THE WORLD

Canada’s curve has not yet flattened to the extent of China’s or even South Korea’s, but it is clear that the pandemic is slowly abating.

The new daily case counts this week were lower every day than had been recorded here since the big increases began in late March.

With more than 100,000 cases of COVID-19 now confirmed in the country, Canada’s total is higher than the official numbers from more populated nations such as China, Indonesia and Ukraine. Per capita, we’ve been hit harder than France, Germany and Greece, among others.

The Johns Hopkins data puts Canada among the top 20 countries in the world in total cases and top 15 in total deaths – and that’s with the tight border controls that have severely curtailed the number of new arrivals in the country.

Despite those overall numbers, Oughton said he sees reason for optimism in how Canada has handled the pandemic more recently.

“Canada, overall, is doing exceptionally well compared to many other countries,” he said.

Canada also stands out, less positively, for its death rate. According to the Johns Hopkins data, 8.2 per cent of COVID-19 cases in Canada have resulted in death. That’s less than several countries in western Europe – France, the United Kingdom and Spain included – but more than most of the rest of the developed world. In the U.S., that number is five per cent. In South Korea, it’s 2.2 per cent. In Australia, it’s even less.

This can largely be explained by the crisis in Canada’s long-term care (LTC) homes. One recent study found that 81 per cent of all those who died of COVID-19 in Canada lived in LTC homes, while the average across the 17 developed nations studied was 42 per cent.

Other outbreaks have been linked to migrant worker camps and other facilities where distancing is a challenge. But as Canada reopens, new dangers are becoming clear, such as the nail salon in Kingston, Ont. that had been linked to 21 confirmed COVID-19 cases as of Sunday.

St. John said he hopes Canadians will take the lesson of the nail salon to heart, and understand that businesses reopening does not mean life is back to normal.

“I’m dismayed by the pictures that we get from the U.K. … and from Florida, of the people flocking, jamming the beaches, and basically ignoring the social distancing rules,” he said.

“Complacency is my biggest worry – that as we open, people start to say ‘I guess we’re back to normal and I don’t have to worry so much.’ We must avoid that complacency.”