You Are Here Home Health News So You Want to Be a Contact Tracer? 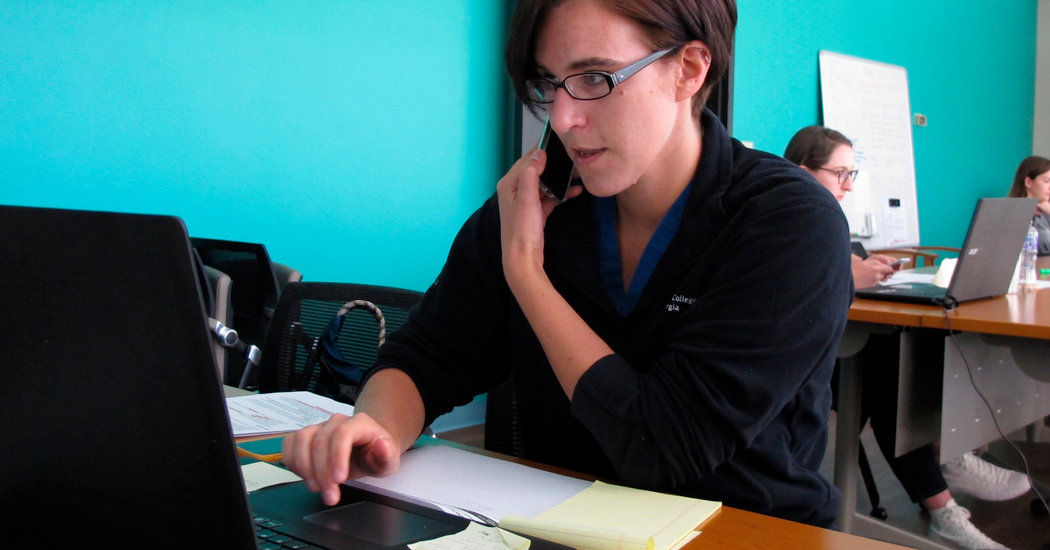 When Jessica Jaramillo calls someone to talk about the coronavirus, she usually starts with something like this:

“Hi, my name is Jessica. I’m calling on behalf of the San Francisco Department of Public Health. I’m part of a contact-tracing team, and our job is to reach people who have come into close contact with someone who has been diagnosed with Covid-19.”

Ms. Jaramillo, 41, a San Francisco Public Library district manager in ordinary times, has made dozens of such calls so far, all in Spanish. She began contact tracing, or “seguimiento de contactos,” this month.

She is one of more than 11,000 people across the United States who are calling people with advice about containing the spread of Covid-19, according to a survey conducted by NPR. (That number has most likely grown since the survey was first conducted in April.)

The work is mostly phone-based and can be done from home. The jobs can be full- or part-time, often with an hourly wage of $17 to $25; some include benefits. They differ from one place to the next in part because training and recruiting efforts have largely fallen to state and local governments (and some of the programs have already run into problems, both practical and political).

As communities begin to open up and more people venture outside their homes, the job is expected to become more crucial — and more difficult.

“If you can do contact tracing, you can get ahold of this before it runs through a community like wildfire,” Ms. Jaramillo said. “Then you’re saving someone’s grandmother, or their uncle.”

As a public employee who had signed up to be a disaster service worker, Ms. Jaramillo was ready to serve her community in the event of, say, an earthquake. She did not expect a pandemic.

Ms. Jaramillo’s phone conversations unfold according to the needs of the people on the other end of the line. If they need testing for Covid-19, she can refer them for an appointment. If they have symptoms, she might recommend isolation. If they worry about survival in quarantine, she can connect them with food-delivery services.

And if they worry about privacy, Ms. Jaramillo assures them that their information is secure. Her training involved a primer on the federal regulations protecting confidential health information, and she works with encrypted software. Ms. Jaramillo and other San Francisco contact tracers do not share the names of people who have a Covid-19 diagnosis with the people they call.

“Contact tracing is not a silver bullet,” said Dr. Mike Reid, an assistant professor at the U.C.S.F. School of Medicine.

But he said the “old school” approach of San Francisco and other health departments — which is based on education and empowerment, not tracking apps like the ones Google and Apple are working on — can bring communities together and build capacity to handle future crises.

In a time of isolation, there’s something appealing about a job that calls for human connection. And for some, the work is a way to punch back at a pandemic that has pummeled the national economy.

And the opportunities vary from state to state; Massachusetts and California were among the earliest to adopt widespread Covid-19 tracing programs.

Kevin Williams, 27, a writer and driver in Columbus, Ohio, thought he would give contact tracing a shot after the state’s Department of Health announced last week that it was hiring at $18.59 per hour.

“If they call me back and I get an interview, then great,” he said. “I really don’t have a hell of a lot of options right now. But also, I just don’t feel like these jobs are real. Are they actually contact tracing, or do they just want to look like they’re doing the right thing?”

He did not hear back, and by Tuesday, the job posting on the Health Department’s website had been removed. Over 9,000 people applied to do contact-tracing work with the state, according to the department.

And although Ohio officials have called for 1,700 contact tracers, those were to be deployed largely by local health departments. The state job Mr. Williams applied for had been seeking only 100 people.

Oscar Baez, 33, a Foreign Service officer, had better luck. He was evacuated from his post in Jerusalem in March and returned to Boston, where he grew up.

Mr. Baez, who is from the Dominican Republic, has used Spanish, Portuguese and Arabic to communicate with the people he calls in the Boston area.

“This is an opportunity to go on offense, track down exposures to this virus and limit the spread,” he said. “It requires heart.”

Contact tracers don’t work alone. The process starts with investigators who reach out to people with Covid-19, and those conversations yield contacts for tracers.

After those calls are made, there is follow-up work to be done to help people find resources like food pantries and financial assistance.

“We’re asking people to quarantine when they may not have baby formula for the next day, or they might not have food to feed a family of eight,” Mr. Baez said. “So how can we ask them to stay home if they don’t have financial assistance and social support?”

What makes a good candidate?

Mr. Baez found this job through Partners in Health, which has helped Massachusetts officials recruit and train more than 1,700 people. That’s only a fraction of the more than 41,000 who have applied through the organization.

John Welch, a director of operations with Partners in Health, said he was impressed with the range of people who wanted to help. They included retired health care workers, furloughed public employees and former hospitality workers.

“If their computer skills are lacking a little bit, we can help boost that,” he said. “But what’s really important in the middle of an epidemic is empathy.”

While a college diploma is not always required, Mr. Waters said the best candidates have a bachelor’s degree and some background in health care services.

Diversity is important, too.

“Cultural literacy is key to developing trust with someone you are cold-calling, particularly in minority or distressed communities, which are some of the worst hit,” Mr. Waters said.

And Mr. Baez, whose diplomatic career has taken him to countries including Haiti, China and Brazil, is now putting his skills to use in the neighborhood where he grew up, speaking to immigrant families much like his own.

“I see the date they tested positive, and it’s at the same community health center that I went to for physicals as a kid,” he said. “Every single day is different. I’m hearing many, many individual stories that are depressing, inspiring and uplifting all at the same time.”