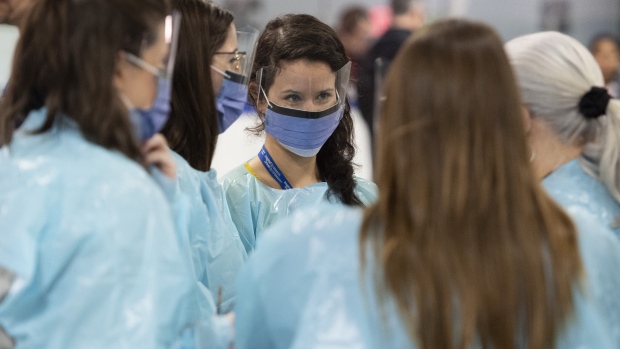 TORONTO — As Canadian hospitals prepare for an anticipated surge in COVID-19 cases, they face a more pressing dilemma: a shortage of protective medical gear needed to treat patients with the highly infectious virus.

China produces the vast majority of the world’s personal protective equipment (PPE), including gowns, gloves and masks. But when China closed most of its factories earlier this year due to the coronavirus, it sent shockwaves through the global supply chain.

“And suddenly, 80 per cent of the supply for the rest of the world just disappeared,” Guillaume Laverdure, the North American president for Medicom Inc., a Montreal-based medical supplier, told CTV News.

Many Canadian companies that import medical supplies say they haven’t received a shipment of PPE in nearly two months. Sheldon Sturock, CEO of Allied Medical in Vaughan, said governments around the world are scrounging for whatever they can find.

“Because it’s a worldwide event, every country is holding on to what their country makes,” Sturock said.

That shortage is already being felt at Toronto’s Mt. Sinai Hospital, where staff are being told they will be issued a single face mask per day. All employees are required to wear masks at work and are being told not to change their masks between patients.

“It’s just a testament to the fact we’re in a critical shortage,” Dr. Saikaley said.

So last week, Dr. Saikaley put out a call on Facebook asking anyone with extra masks to donate them to healthcare providers. Hospitals have also set up their own PPE drives, encouraging businesses from tattoo parlours to vet clinics to chip in whatever they can.

“It’s never just one person who’s seeing a patient. It’s multiple people, and each of those people needs their own set of PPE,” he said.

Those sorts of drives are helpful, but Chief Public Health Officer Theresa Tam said a federal system is already in place to make sure each province has the equipment it needs.

“People are coming up with their generosity, but of course we don’t just rely on that,” she said.

Suppliers say they hope PPE exports from China will return to normal levels soon, but it may ake weeks for that gear to arrive.

To offset the shortage, some Canadian manufacturers put out of work by the pandemic have vowed to retool their assembly lines to create the critical medical supplies.

Since the federal government issued a call for help to Canadians businesses last week, the government has already received more than 5,800 submissions offering goods and services. Eleven million N96 respirator masks, used to reduce the spread of the virus, have been received, along with orders for gloves, gowns and ventilators.

With files from CTVNews.ca’s Nicole Bogart