Obtaining the Campaigns list from the server has failed!
Server response:
CM Ad cahger Server plugin is not active on https://legendarygroup.co/admanager/
You Are Here Home Health News Some in Missouri Seek Covid-19 Shots in Secret, Doctor Says 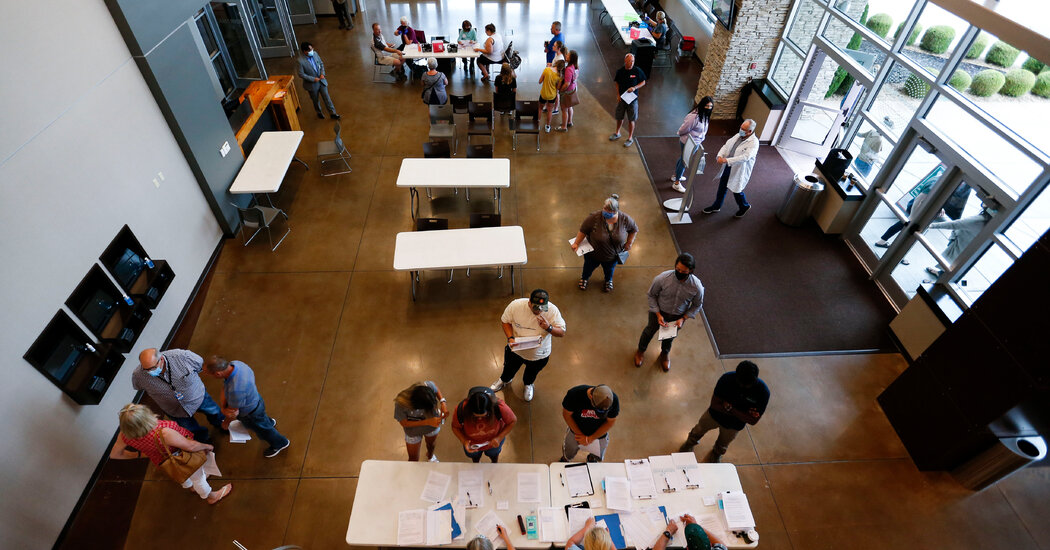 Even as the more contagious Delta variant drives a surge in infections, the Covid-19 vaccination effort has become so polarized in Missouri that some people are trying to get shots in secret to avoid conflicts with friends and relatives, a doctor there said.

In a video circulated by her employer, Dr. Priscilla A. Frase, a hospitalist and the chief medical information officer at Ozarks Healthcare in West Plains, Mo., said this month that several people had pleaded for anonymity when they came in to be vaccinated, and that some appeared to have made an effort to disguise themselves.

“I work closely with our pharmacists who are leading our vaccine efforts through our organization,” she said, “and one of them told me the other day that they had several people come in to get vaccinated who have tried to sort of disguise their appearance and even went so far as to say, ‘Please, please please, don’t let anyone know that I got this vaccine.’”

It was not clear how many people had tried to alter their appearance to avoid recognition, or how they had done so. Dr. Frase, who wore a mask in the video, did not immediately respond to a request for comment.

Some people, she said in the video, were “very concerned about how their people that they love, within their family and within their friendship circles and their work circles, are going to react if they found out that they got the vaccine.”

The video was circulating online as public health officials in Missouri were confronting a resurgent outbreak, driven by the Delta variant and concentrated in the state’s south and southwest.

The state’s vaccination rate lags that of most other states and the nation as a whole. According to a New York Times database, 41 percent of Missouri residents have been fully vaccinated against Covid-19, compared with more than 49 percent nationwide. In Howell County, Mo., where Ozarks Healthcare and Dr. Frase are based, only 20 percent of residents are fully vaccinated.

Despite that evidence, public health measures to slow the spread of the coronavirus, including vaccinations, have been politicized across much of the country. In some places, including in parts of Missouri, being unvaccinated has become a point of pride for some people. In a Politico report this week, few people who were interviewed at Lake of the Ozarks, a popular tourist destination, acknowledged that they had been vaccinated, and some said that they had been shamed by friends or relatives.

In the video, Dr. Frase said she was particularly troubled by the increased spread of misinformation about the vaccines.

“I want people to ask medical people,” she added, “or ask somebody that they trust who has good knowledge — not rely on the stuff that’s out there on social media, not rely on people who have opinions not based on facts.”

It was “disheartening,” she said, “to have gotten to that place where we, as health care providers, thought that maybe things were finally back to whatever our new normal is going to be after this pandemic.”