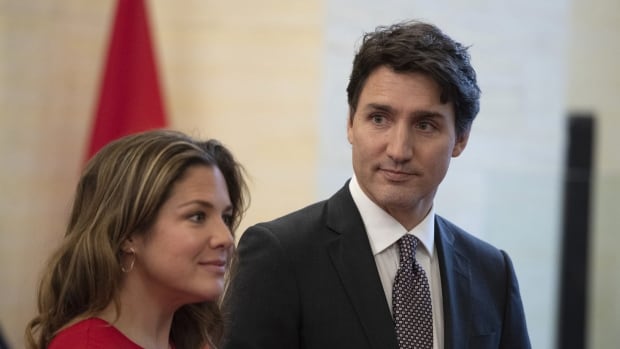 “She is feeling well, is taking all the recommended precautions and her symptoms remain mild,” the PMO said, adding that the prime minister “is in good health with no symptoms.”

Trudeau will also stay in isolation for 14 days, but on the advice of his doctors, will not be tested because he has no symptoms.

He plans to address Canadians on Friday.

I have some personal news to share today. Sophie recently returned from a speaking event in the UK, and last night she was experiencing mild flu-like symptoms. She‘s feeling better, but following the advice of our doctor she is self-isolating as we wait on COVID-19 test results.

Meanwhile, a meeting between Trudeau, the premiers and Indigenous leaders that was scheduled to begin in Ottawa today was postponed in response to the COVID-19 outbreak.

Trudeau, absent from the House of Commons due to self-isolation, was offered best wishes today from Conservative Leader Andrew Scheer at the opening of the daily question period.

“I’m sure I speak for all members when I convey our best wishes to the prime minister and his wife and any other parliamentarians who may be affected by symptoms. We wish them and her a speedy recovery,” he said.

The statement from the PMO says Trudeau would speak to the provincial and territorial leaders by phone to discuss “collective action” to limit the spread of COVID-19.

The agenda of the now-cancelled First Ministers Meeting was to focus on economic issues, including the impact of tumbling oil prices on the national economy, the pressing need for critical infrastructure and the impact of COVID-19.

The PM spent the day in briefings, phone calls and virtual meetings from home, including speaking with other world leaders and joining the special COVID-19 cabinet committee discussion, an earlier PMO statement said.

One of those calls was with Italy’s Prime Minister Giuseppe Conte. According to a readout from the PMO, Trudeau expressed solidarity with Conte and all Italians as they take “extraordinary measures” to contain and respond to COVID-19.

“The prime ministers discussed steps they are taking to protect health and safety, and to promote economic resilience. They agreed on the importance of international coordination in response to the virus,” the call summary reads.

Finance Minister Bill Morneau offered reassurance to Canadians at the end of a day that saw record declines in the stock market. The S&P/TSX Composite Index fell by almost 12 per cent, eclipsing the previous record for a one-day decline that was set on Black Monday in October 1987.

“We expect a level of volatility in the stock market right now. We know that with the coronavirus that there’s a high level of uncertainty, and that’s reflected in markets,” he said.

Finance Minister Bill Morneau offered reassurance to Canadians at the end of a day that saw record declines in the stock market. 1:24

The finance minister said he wanted to reassure people that the federal government is doing everything it can to both protect the health of Canadians and ensure the “long-term” health of the economy.

Morneau pointed to the $1 billion in new spending announced on Wednesday to boost the health care system’s response to the virus. He also said that steps have been taken to ensure people can stay home from work and that, despite running federal deficits, Canada remains in a strong position to act if necessary.

Morneau also said he would be speaking with U.S. Secretary of the Treasury Steven Mnuchin and some Canadian banking leaders to make sure his government retains the capacity to respond as necessary.

On Wednesday, federal Health Minister Patty Hajdu said experts have suggested the coronavirus could infect 30 to 70 per cent of the population. The World Health Organization (WHO) has formally declared the outbreak a pandemic.

“I have been in contact with a doctor and they do not believe I have symptoms consistent with COVID19. But their advice is for me to limit contact with the public until I am feeling better,” he tweeted.

Friends, I am at home today, feeling unwell.<br><br>I have been in contact with a doctor and they do not believe I have symptoms consistent with COVID19. But their advice is for me to limit contact with the public until I am feeling better.

As of midday Thursday, there were at least 137 presumptive and confirmed cases reported in Canada, with one death.

Calgary has reported the first known Canadian case of a child testing positive for the virus, and Manitoba and Saskatchewan each announced their first presumptive cases on Thursday.

Across the country, concerts, conferences, sports events and other public gatherings have been cancelled. Today the NHL suspended its season due to COVID-19.

The Public Health Agency of Canada (PHAC) still assesses the risk as low to Canadians, but says there is a higher risk of severe outcomes for people older than 65 and for those with lowered immunity or chronic health conditions. PHAC says it is continuously assessing the situation “as it evolves rapidly.”

Ontario Premier Doug Ford, who has already arrived in Ottawa for the planned meetings, said today all Canadians must pull together to get through the COVID-19 crisis.

“Moments of urgency require us to put aside our differences, have each others’ backs, stick together as a country and reassure the people of Ontario and the people of Canada that we’re all in this together,” he told a news conference in the capital.

Yukon Territory Premier Sandy Silver had already cancelled his attendance at the meeting “out of an abundance of caution” and after a conversation with the chief medical officer of health in his territory.

New Brunswick Premier Blaine Higgs also questioned whether it was “prudent” for the country’s leaders to gather in one spot.

“We’ve actually connected with Ottawa and our colleagues and considering, can we do this on a video conference? Can we look at this another way? If we’re asking people to stay home, should we be doing the same thing?” Higgs said in an interview with CBC’s Power & Politics.