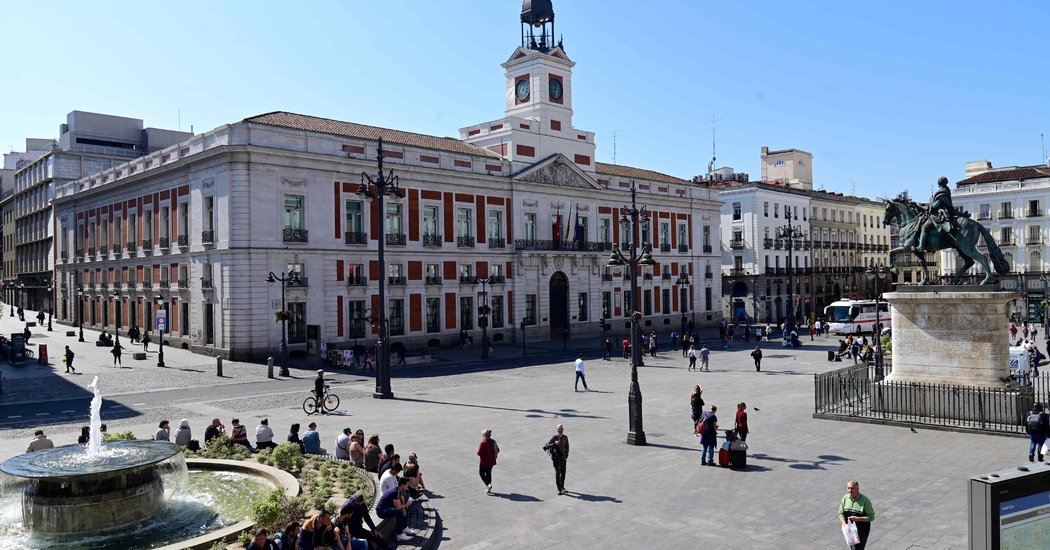 MADRID — The Spanish government met in an all-day session on Saturday to decide on strict measures to contain the rapid spread of the coronavirus, a day after the country declared a state of emergency because of an alarming rise in infections.

Regional officials had already declared on Friday a lockdown of one region, Catalonia, telling all residents to stay at home. The cabinet could decide to extend similar measures nationwide on Saturday, which would make Spain the second country in Europe to do so after Italy.

The authorities in the capital, Madrid, on Friday ordered all hotels, restaurants and bars to close, restrictions that could also be extended to the entire country on Saturday.

“We’re the new Italy,” said Francisco Gutierrez, a 33-year-old street cleaner for the city of Madrid. “We don’t know how long it’s going to last, and we don’t know how much Spain will suffer from this yet.”

Pedro Sánchez, Spain’s prime minister, warned on Friday that the number of coronavirus cases in Spain could reach 10,000 next week given how sharply infections have been rising.

Health authorities reported a surge of 1,500 new infections on Saturday, the largest daily increase reported in Spain since the beginning of the outbreak, suggesting that the country is following a curve similar to that seen earlier in Italy. The death toll in Spain rose to 136 on Saturday.

Madrid is normally one of Europe’s most bustling cities, with people filling its public parks and squares, or meeting for drinks and tapas in its thousands of bars and cafes. Yet on Saturday, it resembled a ghost city, as the capital’s 3.5 million residents, who normally spend much of their social life on the streets, started to follow the advice of the authorities to stay at home.

Those who ventured outside often headed for the supermarkets to buy essential supplies. All other stores, restaurants and bars had already been ordered shut starting Saturday. Museums and other public venues had closed earlier this week. Madrid’s central park, the Retiro, remained open, but it was almost empty.

With the Madrid region now the epicenter of Spain’s coronavirus crisis, accounting for more than half of the 5,700 cases reported nationwide by Saturday, the city has abruptly followed the example of Milan and other Italian cities that were recently put under lockdown to contain the spread of coronavirus.

The train stations and main avenues of Madrid were almost deserted, while some police cars patrolled the city center. Only stores providing basic services were allowed to stay open, like supermarkets and gas stations.

The Spanish government has only once before declared a state of emergency, in 2010, when the Spanish military was ordered to break up a wildcat strike by air traffic controllers that had paralyzed the country’s airports.

In Catalonia, the region’s leader, Quim Torra announced a lockdown of the 7.5 million residents of Spain’s northeastern region on Friday, and asked the central government in Madrid to help suspend travel to and from the region by closing airports and train stations. That has not yet happened, and on Saturday trains were still running from the region’s capital, Barcelona, to Madrid.

Mr. Torra said it was necessary to “restrict entrances and departures” from Catalonia, which has reported more than 500 cases and six deaths. On Saturday, he urged Spanish authorities to implement a similar lockdown throughout the country.

“We have to do it,” he wrote in a tweet, as authorities ordered that malls and various facilities be closed down.

Elsewhere in Spain, the southern city of Seville canceled its Easter celebrations, an event that attracts hundreds of thousands of visitors every year. In the southeastern region of Murcia, the regional authorities put almost 400,000 residents of its coastal towns under lockdown, while warning visitors from Madrid and elsewhere to stop heading for the seaside and risk spreading the virus further.

The northern Basque region also declared its own state of emergency.

On the arcaded Plaza Mayor, one of the main public spaces in the heart of Madrid, some tourists took a last walk as they hoped to catch a flight later in the day.

“Life here is slowing down by the hour,” said Stéphanie David, a visitor from Belgium. “On Thursday, Madrid was still lively,” said Ms. David’s partner, Paul Malkomes. “Now it looks like a ghost town.”

Terminal 1 of Madrid’s airport was also almost empty on Saturday morning. Among the few tourists, some said that they had scrambled to rebook in order to leave Madrid earlier than scheduled, fearful that a Spanish state of emergency might very soon close down Madrid’s airport altogether, or that their airline would in any case cancel their flight.

Victor Van Leijsen, a student from the Dutch city of Breda, was preparing to depart Madrid for Brussels, alongside his twin brother. The siblings flew to Madrid on Thursday and had planned on spending a long weekend in the Spanish capital.

“We rebooked early this morning because we were afraid we could perhaps then simply not get back,” said Mr. Van Leijsen. “We really needed a weekend off, but it unfortunately got a little shorter than we planned. It’s just a shame that in the end everything got closed down in Madrid.”

Regional authorities in Madrid announced that all businesses would remain closed until March 27, a scenario that echoed what authorities in Italy implemented last weekend.

As local residents bought groceries and hurried back home, bracing for most restrictive measures to be announced, the authorities urged people to remain calm, while calling to maintain a one-meter distance in supermarket lines.

Yet many said they knew the worst had yet to come.

“Nobody wanted to believe that it could happen to us, too,” Amuda Goueli, an Egyptian entrepreneur who lives in Madrid, said behind a mask. “But it is now, and we have no idea how far the pandemic will stretch, or what kind of crises it will trigger here and in the rest of the world.”

Mr. Goueli, the co-founder of an online travel agency, said Spaniards, like others in European countries, were not psychologically prepared to face such a scenario because they had not faced such a crisis in a generation.

“There has been no war, no widespread illness, and a relative state of well being despite the economic crisis,” Mr. Goueli said. “So Europeans were just not ready. We don’t know how to react.”