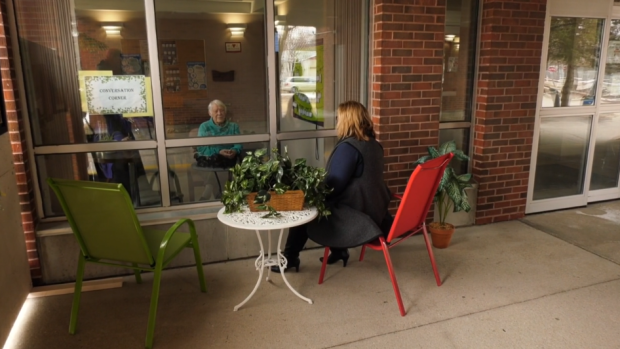 OTTAWA — Ottawa Mayor Jim Watson says the city staff who had issued a directive asking families of long-term care residents to stop visiting at the windows have apologized for what the mayor called an “oversight.”

Speaking on CTV Morning Live Friday morning, Watson said he first learned of the policy when he read about it in the newspaper and immediately organized a conference call to tell staff to change course.

“The first I saw it was in the Ottawa Citizen and I started to get some emails from members of council who were concerned about it,” Watson said, “so, that’s why I called together all the key people and said, ‘This is not acceptable and we’re going to reverse the policy.'”

Watson’s decision to overturn the directive, which was first reported Wednesday, came after the city’s medical officer of health said neither she, nor Ottawa Public Health staff, had been consulted about the plan.

“Looking through a window is not a threat,” said Dr. Vera Etches during an interview Thursday morning on CTV Morning Live. “It can be an important source of reassurance for family members on both sides of the glass. Ottawa Public Health was not consulted or advised before the City decided to issue this directive.”

Dr. Etches told CTV Morning Live’s Leslie Roberts activities that put the residents of long-term care homes at risk should be decreased, but stressed simply looking through a window is not a high-risk situation.

“Saving the lives of the residents is the first priority so I’m sure staff are focused on that,” she said. “Looking through a window is not a threat. If there are other activities that are a threat then we need to find ways to decrease that because this is a vulnerable population and we know that, unfortunately, if the virus is introduced by others it can have a terrible impact.”

Watson said staff should have consulted with Dr. Etches first.

“It was an oversight and I accept that perspective,” Watson said. “They should have consulted Dr. Etches because she is the lead on all things COVID-19 and we take our direction from her.”

The story about the City banning window visits made international headlines and garnered comment from Ontario Premier Doug Ford.

“That’s ridiculous,” Ford said Thursday afternoon. “I don’t know who’s come up with this ridiculous idea, but they need to rethink it.

“Go visit your loved ones, as far as I’m concerned.”

In criticizing the policy, Ford spoke about his experience visiting his wife’s mother, who lives in a long-term care home.

“When our family goes to visit my mother-in-law, I thank God she’s on the first floor,” he said. “Not to be allowed to go look at your loved one through a window give them a kiss or put your hand up on the window, that’s just wrong. They’ve got to think these things through.”

New directive due May 7

In a statement to CTV News on Wednesday, Director of Long-term Care Dean Lett said the “difficult decision” was based on “prioritizing the health and safety of residents and staff.”

But after swift backlash, Mayor Jim Watson ordered staff to reverse course Thursday morning, saying a new policy is in the works to allow families to visit loved ones at the four city-owned long-term care homes.

“I have directed city staff to work with Ottawa Public Health to come up with a way to reinstate window visits for family members with loved ones at our long-term care homes,” Watson said on Twitter.

“I have asked that a plan be in place by May 7, that will ensure residents and visitors respect the physical distancing rules at the same time.”

In his statement on Wednesday, Lett said there were instances of families not respecting physical distancing as the weather improved, which is what prompted the directive.

“We have experienced a number of situations where families have visited and have not respected the requirement for physical distancing as directed through public health agencies,” Lett said.

City staff expanded on the rationale for the decision in a memo to council on Thursday, saying the approach had, at that time, kept all city-run long-term care home residents free from COVID-19 infection.

“Introducing the virus into homes as a result of family members coming into contact with residents and staff on the grounds of the homes would likely lead to the death of residents. This must be avoided,” said the memo from Donna Gray, general manager of community and social services.

“On a number of occasions visitors on the premises have not respected the physical distancing requirements and have been in direct contact with staff and residents putting residents and staff at risk of exposure.

“As a result of the risk to residents, staff took immediate action to restrict facility access.”

Watson said Friday, in some cases, family members were removing screens from the windows.

Lett said the City homes have deployed extra staff and more technology to allow family members to connect to their loved ones remotely and stressed the City has “a responsibility to do everything possible to minimize the risks of COVID-19 from entering the homes and to protect the safety of residents and staff.”

On Friday morning, however, the City issued a new memo to say two residents of the city-run Peter D. Clark long-term care home had tested positive for the virus, alongside a second employee. It is unclear whether these cases are connected with the issues staff had brought up when ordering the window visit ban.

The two cases reported Friday are the first cases of COVID-19 in residents of city-run long-term care homes, though there have been some cases of employees contracting the virus. Some privately-operated homes in the City are experiencing devastating outbreaks.

At least 57 residents of long-term care homes in Ottawa have died from COVID-19. There have been five deaths in local retirement homes.