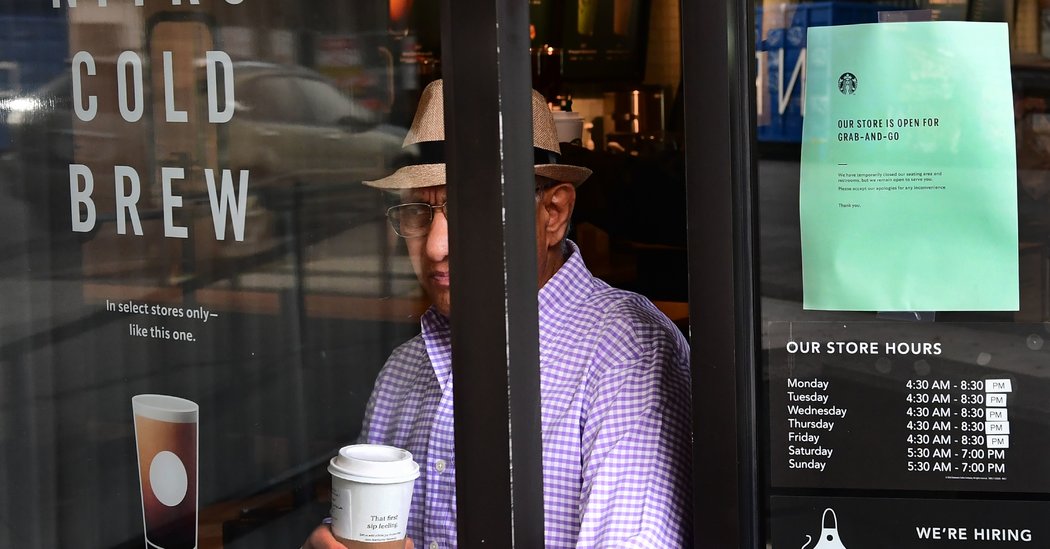 There was a new sign affixed to Starbucks doors across the United States on Monday. “We have temporarily closed our seating area, but we remain open to serve you,” it said. “Please accept our apologies for any inconvenience.”

The floor was unusually empty at one location in Upper Manhattan, with tables and chairs stacked near the windows.

The milk and cream were missing from their usual spot (but available upon request, according to a sign). One woman with a pastry in a paper bag lingered to get access to the store’s Wi-Fi with her phone until a barista apologetically explained to her that, according to a new policy, she had to leave.

Starbucks, the biggest coffee chain in the United States, has long marketed itself as a “third place” where customers could order a latte but also sit for a prolonged time with a notebook, newspaper or laptop. Bonus points for a table near an electrical outlet, or maybe a window seat.

But in a statement on Sunday, the company said it was temporarily “pausing the use of all seating, including both the cafe and patio areas,” in its locations in the United States and Canada.

Customers can still order drinks and snacks using the Starbucks app and by delivery or drive-through. Many shops are open for customers to grab and go, but for at least two weeks, they won’t be able to sit and sip.

At a time of social distancing, many offices are off limits and service and retail businesses large and small are experimenting with ways to stem the spread of the coronavirus.

Those who need to work remotely might have seen Starbucks as a good place to get things done. Now, that, too, is off the table.

Howard Frank, a writer in Stroudsburg, Pa., said he regularly visited his local Starbucks on days when he worked from home. He is typically there for a few hours at a time, sitting in his favorite spot at a long table off to the side, next to a power outlet and away from foot traffic.

He learned on Monday that the seating areas would be closed. “I was really bummed,” he said. Now he plans to work from home, where it will be easier to get distracted by the refrigerator, the television or the dog.

But Mr. Frank, 63, said he understood the reason for the change. “All demographics visit Starbucks, and it’s just an incubation ground for anything that might be going around,” he said. “So I think it was a prudent decision on their part.”

The coffee chain, which has more than 10,000 company-owned outlets in the United States and Canada, is not alone.

Tim Hortons, the popular Canadian fast-food chain, announced that it would close its dining areas beginning Tuesday to focus on takeout, drive-through and delivery service. Dunkin’ said on Monday that it was reducing hours, removing tables and limiting its service to drive-through and carryout at its restaurants in the United States.

On Monday, the governors of Connecticut, New Jersey and New York announced broad restrictions on public life in those states: Casinos, gyms and movie theaters will be closed starting Monday evening, they said, and bars and restaurants will be limited to takeout and delivery.

Some Starbucks locations in high-traffic areas, like malls and campuses, will be temporarily closed entirely, the company said.

“As we all know, the situation with Covid-19 is extremely dynamic and we will continue to review the facts and science and make the proactive decisions necessary to protect our partners, customers and communities,” said Rossann Williams, the executive who oversees the company’s 200,000 workers in the United States.

“Partners” is the term Starbucks uses for its employees, including baristas.

The company last week told its employees in the United States that it would provide up to two weeks of paid leave to any employee who was infected with the virus or had extended contact with a co-worker or household member who tested positive.

Starbucks had previously responded to the spread of coronavirus by prohibiting customers from using their own cups and putting in place a strict cleaning regimen, telling employees to wash their hands and disinfect “high-touch” surfaces every 30 minutes.

Last week, some employees expressed concern about the added work, especially because many Starbucks locations follow a lean staffing model.

Starbucks did not respond on Monday to a question about how the seating announcement would affect staffing, but a spokesman said that employees’ schedules were posted at least two weeks in advance, and that they would be paid for their scheduled hours even if their store was closed.