You Are Here Home Health News The Fashion World, Upended by Coronavirus 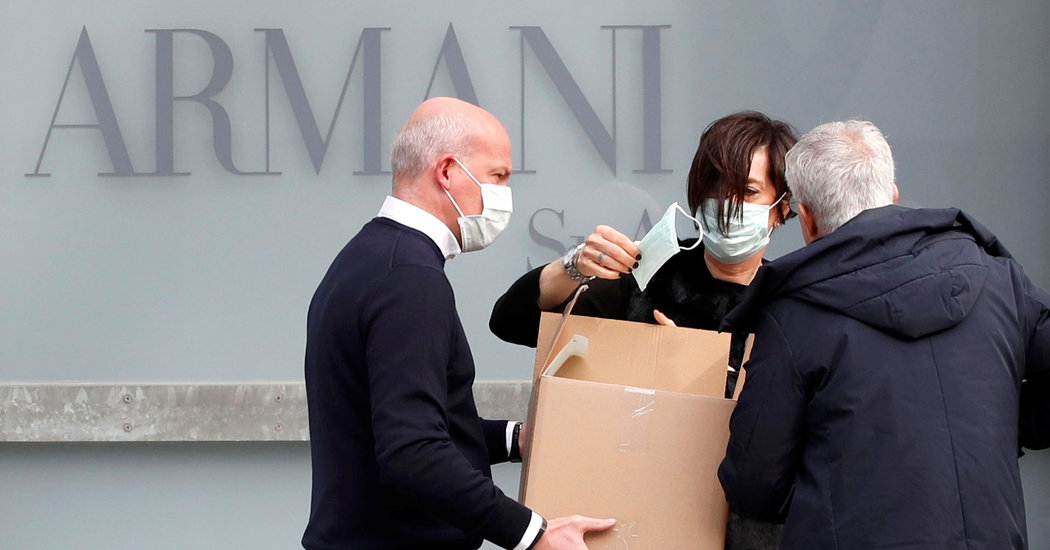 PARIS — Twice a year, the luxury fashion houses of the world present their ready-to-wear clothing for the coming season. This creates an international traveling circus of retailers and reporters, high-spending customers and Instagram influencers, executives and a small army of public-relations professionals, many traveling from New York to London to Milan and finally to Paris.

This year, the caravan’s arrival in Milan in mid-February intersected with an outbreak of Covid-19, the new coronavirus, in Italy, then the country worst hit by the illness outside of Asia.

And so, a thousand or so very well-clad people wondered for a few weeks: Would they become a global public health menace, a vector of transmission from the elite front rows of fashion shows to the world at large?

The final leg of this monthlong tour arrived for a week in Paris starting on Feb. 24. On the first day of shows, the number of reported cases of coronavirus in France was just 14; by the last day, there were more than 200, and the country had banned gatherings of more than 5,000 people in confined spaces.

Many attendees were sleep deprived; some were already sneezing and coughing from seasonal colds. Design houses were handing out face masks before their shows. Several high-profile American buyers and magazine editors, including those from T: The New York Times Magazine, decided to leave Paris early; some didn’t come at all. (The United States communications team for Chanel and Louis Vuitton was told to stay at home.)

The largest of the shows were attended by up to 1,000 guests. Another show took place in a sealed plastic tube, as if it were its very own petri dish.

By midweek, Americans had begun strategizing with their employers in New York about their returns to the United States. Would they need to self-quarantine — work from home — and for how long?

At Lacoste, the penultimate show of Paris Fashion Week, roughly 20 to 30 percent of media guests had canceled.

What remained uncontained were the rumors. The Miu Miu show was going to be canceled, people said. (It was held as scheduled, but Miuccia Prada, the designer, chose not to host her usual post-show meet and greet, although she had performed the same ritual less than two weeks earlier, after her Prada show in Milan.)

With some transport in Italy grounded, Louis Vuitton was rumored to have used the personal jet of Bernard Arnault, the head of the parent company, LVMH Moët Hennessy Louis Vuitton, and the third richest man in the world, to transport its handbags from coronavirus-infected Italy to less infected France.

“I wish I had invented that!” said Michael Burke, the Louis Vuitton chief executive, when asked about the rumor.

At the Vuitton show on Tuesday, held in a closed courtyard at the Louvre, Antonio Belloni, the group managing director of the company, was pantomiming fist bumps rather than greeting people with a handshake or a double-cheek kiss, the industry standard.

It was an eerie setting: The museum’s staff had walked out on Sunday amid concerns about the spread of coronavirus, effectively closing the French monument. (After three days, the Louvre reopened on Wednesday.)

Sidney Toledano, the chief executive of LVMH Fashion Group, shared squeezes of hand sanitizer from his pocket-size bottle with Jonathan Newhouse, the chairman of Condé Nast, and both of their wives.

At one show, a New York Times journalist was approached by a reporter from another outlet. Was it true, the reporter asked, that someone at The Times had already contracted the virus? (It was not.) At the next show that day, a Swiss fashion executive recoiled when another Times reporter tried to greet him with a handshake, avoiding the gesture (and eye contact).

The End of Fashion Shows?

The crisis has accelerated a question hanging over fashion in recent years. Runway shows are expensive, laborious and environmentally harmful. Are they still worth absorbing an entire month?

Before the Alexander McQueen show in Paris on Monday night, François-Henri Pinault, the chief executive of the luxury conglomerate Kering — owner of Gucci, Saint Laurent and Balenciaga — wondered whether the industry should begin digitizing showrooms and considering a new system. (Throughout fashion week Mr. Pinault joked, or half-joked, that he had been taking his temperature twice a day to monitor for fever, a symptom of coronavirus.)

Anna Wintour, the artistic director of Condé Nast and editor of Vogue, said she had also been thinking about the future.

“At a time of crisis, we have to think about a radical reset,” she said.

As coronavirus spreads — more than 90,000 cases and more than 3,000 deaths have been reported worldwide — the industry isn’t so sure about its ability to move forward.

Rakuten Fashion Week, scheduled to begin on March 16 in Tokyo, was canceled. (Japan has, at this time, only slightly more cases than France.) Subsequent fashion weeks in Shanghai and Beijing have been postponed.

Ms. Wintour conspicuously stayed in Paris through the end of the shows,— as did editors from other Condé Nast titles, including Vanity Fair and Teen Vogue. She and her team had been discussing how best to support emerging designers in the current climate.

“They are a creative force and the generation we look to to lead the way forward,” Ms. Wintour said. “If they are all having cash flow problems — as I am sure they are, because of low retail traffic in the showrooms and supply chain issues and people wanting to stay out of public spaces — anything we can do to support them is important.” She was hoping to announce a plan in the next few days.

“We can’t let them fall by the wayside,” she said.

After Paris, Ms. Wintour planned to visit London before returning to the United States. Other editors said they would return to their New York offices on Monday — 14 days after they left Milan, the recommended time for self-quarantine set by the Centers for Disease Control and Prevention after visiting regions where there has been significant presence of coronavirus.

Others will not go back to their offices for two weeks after leaving Paris — mid-March, at the earliest.

“Empty seats at shows are not the problem — it is what is happening in showrooms, the holdups in the supply chains and what they might mean,” said Pascal Morand, the executive president of the Fédération Française de la Couture et de la Mode, the organizing body of Paris Fashion Week. “It is the uncertainty and not knowing how long the situation will last.”

Designers don’t just show their collections at these four big fashion weeks in February and September. They also sell them.

Fashion buyers employed by retailers (Nordstrom and Bloomingdale’s, for example) and e-commerce platforms (Net-a-Porter, Matches Fashion) negotiate order sizes and prices with brands and decide what goes into stores. This happens during intimate showroom appointments separate from runway presentations.

This season’s orders have been down, designers said. Not necessarily for big companies like Valentino, Vuitton and Tod’s, their executives said, but for smaller independent houses, and particularly for those whose production takes place even partially in China.

In an effort to stop the spread of the virus,thousands of Chinese factories, already closed over the celebratory New Year period, have yet to reopen, bringing manufacturing to a near standstill and headaches for many fashion companies that produce samples and wares in the country. Significant added costs from order backlogs and logistics delays are now expected, as well as a looming threat to global trade.

And it’s not just China. Luca Solca, an analyst at Bernstein, wrote of the effect of Covid-19, “The key numbers to watch — at the moment — are the growth in cases in the provinces of Bergamo, Cremona and Brescia,” some of the Italian production hubs.

With many luxury boutiques closed in mainland China, sales down almost 90 percent, and retailers in key luxury hubs like Paris already counting the costs of a significant decline in Chinese tourists, a reduced number of fashion insiders in the front rows of Paris and Milan is the least of the industry’s concerns.

Jefferies Group, an investment bank, estimates that Chinese buyers accounted for 40 percent of the $305 billion spent on luxury goods globally last year, making the Chinese the fastest growing luxury shopper demographic in the world. Buyers are concerned that continuing travel bans will reduce their spending.

“There has definitely been a drop in buyers from all over the world, especially from China and Hong Kong,” said Ayse Ege, a founder of Dice Kayek, a luxury women’s wear label in Paris.

“Lots of buyers are saying their budgets have been cut,” Ms. Ege said. “Some have also asked whether they can cancel orders or have discounts, given the lack of visibility on what might happen next.”

At the end of the fashion tour, buyers typically return to Milan for further appointments with Italian designers and showrooms. This year, those have been canceled. Milan is now, according to one boutique owner, a ghost town. One local restaurant, normally a kind of fashion central, made less than 100 euros in a recent evening. The fashion directors for Bergdorf Goodman and Saks Fifth Avenue did not stay through the end of Paris shows.

But, Ms. Ege added, buying has not stopped completely. It is just happening remotely. Unable to touch and see the products up close, buyers have been video chatting with designers throughout Milan and Paris, using these conversations, along with high-definition look book photos and sales line sheets, to make decisions for the fall season.

Ikram Goldman, the owner of the influential Ikram boutique in Chicago, said that while she has cut back on orders — “with an unstable economy and late deliveries, we are taking precautions,” she said — she is still trying to look for and buy from new designers.

“They are the future, and we can’t forget them,” Ms. Goldman said.