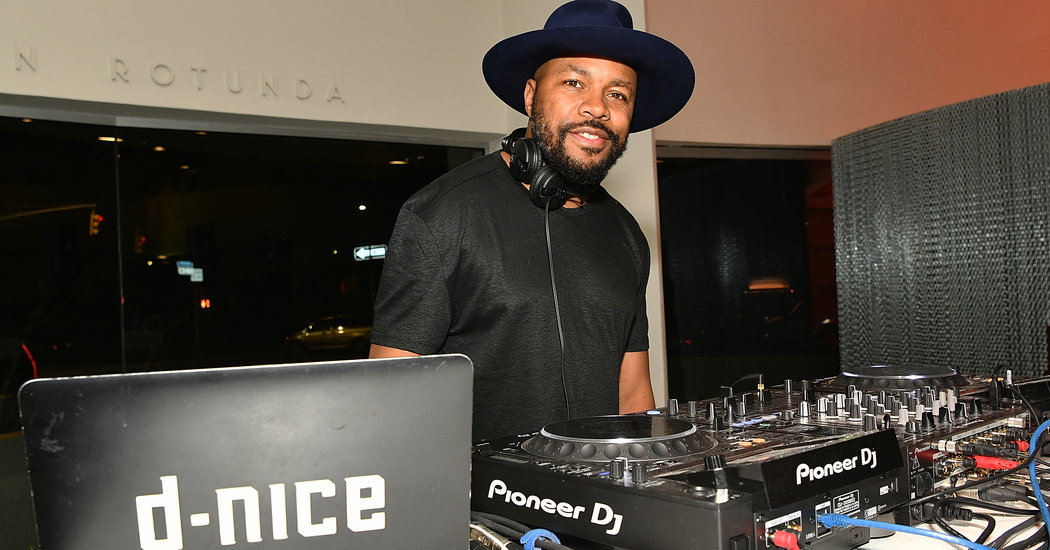 On Friday night there was one place in the country where you could take part in a social gathering and not be afraid of spreading or contracting the coronavirus.

There was no charge at the door, no security, no drink minimum and you could attend in your pajamas from the comfort of your own home.

The party, named Homeschoolin’, was easy to find: It was on D.J. D-Nice’s Instagram live.

Since Wednesday, Derrick Jones, 49, more popularly known as D-Nice, has held streams of hourslong jam sessions from his home in Los Angeles. He plays all of the hits, new and old, but you never hear the same song twice.

As people streamed in and out of his livestream, he gave shout-outs to health care and emergency medical workers helping to get the country through the pandemic.

Many of the country’s most populous states have been following officials’ directives to socially distance themselves to curb the spread of the coronavirus. As of Saturday, over 20,000 people in the United States had been infected and at least 266 people died.

Under the new quarantine guidelines, at least one in five Americans by the end of the weekend will be ordered to stay at home.

The guidelines do not stop the party on social media apps designed to allow people to spend time together without having to see one another in person, eliminating the risk of spreading the virus.

D-Nice simply wanted to play music, he said on Saturday. After having gigs at South by Southwest, Coachella and others canceled, he missed the energy he gets from a crowd.

“Sitting at home during this quarantine, I started to feel empty,” he said. “There is nothing like playing the music and feeling the music.”

Music has been an integral part of D-Nice’s life.

At 16, he became a member of the hip-hop group Boogie Down Productions, alongside rappers like KRS-One and DJ Scott La Rock.

Now D-Nice has pivoted to D.J.ing, curating music at events for Barack Obama, Jerry Seinfeld, Dave Chappelle and others.

On Friday night, on his Instagram live, in which viewers could comment and see who comes in and out of the stream, celebrities pretended that they were at a nightclub with one another. Drake commented that Ciara “owed him a bottle.”

Regular viewers pretended they were at a party, too. One of those viewers was Jose Morales, 41, who owned the lounge APT.78 in Manhattan and now runs a marketing agency of the same name.

“I took his vibe last night and plugged it up to the Bluetooth in my house for a couple of hours,” Mr. Morales said. “He was playing amazing records, but also made it so that an average Joe like myself feels like they are partying with Mary J. Blige.”

“All these people logged on and you really felt like you were partying with them in the same room,” he added.

While many in the country are trying to keep their distance — mainly over six feet away from one another — the human instinct is to socialize, Dr. Brittany LeMonda, a senior neuropsychologist at Lenox Hill Hospital, said.

“We are social animals and that doesn’t just go away during a crisis,” she said. “If this becomes our new normal, we have to get creative with how we feel connectedness.”

The number of people turning to social media apps to feel that connectedness is increasing, said Stephanie Otway, a spokeswoman for Instagram. In Italy, the Instagram live viewership has doubled in the past two weeks, Ms. Otway added.

In the United States, with the surge of coronavirus cases, Ms. Otway said that Facebook, which owns Instagram, had also seen the sharpest increases in group communication via video, with 70 percent more group video calls this week compared with the week prior.

Some people are responding to the lack of connectedness by creating events in which people can come together without endangering anyone’s health.

Irvin Benitez, the event producer behind The Greatest Day Ever!, a two-day music festival in New York that has an average of 8,000 attendees, has come up with a new way to party and help his friends.

On Wednesday, he will livestream 12 local D.J.s playing music from 11 a.m. to 10 p.m. He hopes that people will donate to them in return for the digital party.

“A lot of people that work in that space, their main source of income is severely affected because there can’t be any mass gatherings,” Mr. Benitez said. “We can provide the good time for the people and we can help the D.J.’s get a bit of money to buy groceries or go to the pharmacy.”

For D-Nice, what he got from his livestream party was the experience.

“Musically we found a way to use tech to unite people, that’s a beautiful thing,” he said.

Mr. Morales was simply happy to be in the virtual room.

“It felt like you finally got into the party you would never be able to get into in your wildest dreams,” Mr. Morales said. “Hassle-free.”