You Are Here Home Health News The Rise in Testing Is Not Driving the Rise in U.S. Virus Cases 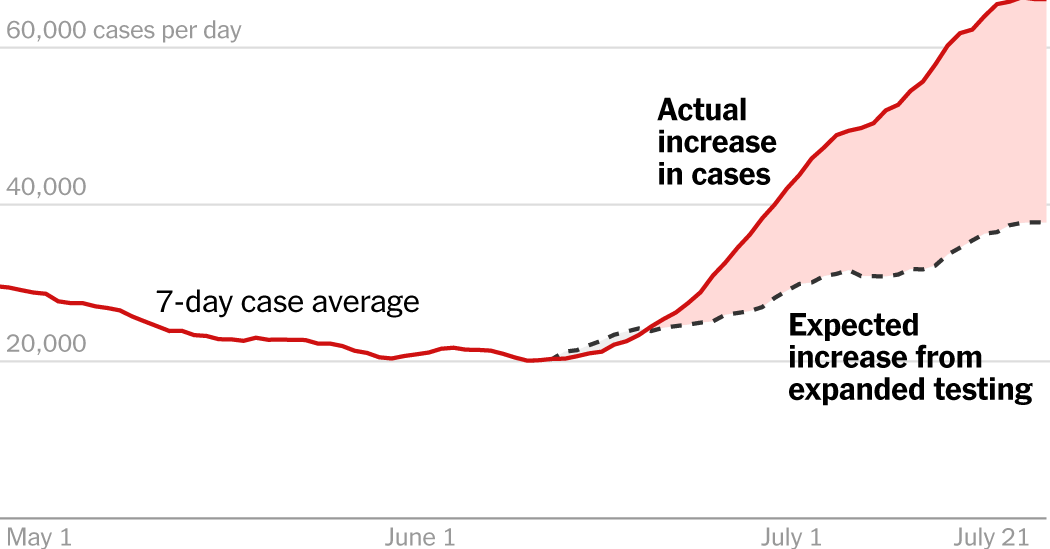 As coronavirus cases have surged in recent weeks, President Trump has repeatedly said the growing case count is a result of increased testing, not a worsening outbreak. An analysis by The New York Times, however, shows the rise in cases far outpaces the growth in testing.

The average number of tests conducted nationwide has grown by 80 percent since early June, to 780,000 per day. Daily case counts have grown by 215 percent in the same period.

Thirty-one states show an increase in cases beyond what would be expected from expanded testing, if the severity of the outbreak had remained about the same. Florida, the state with the largest discrepancy, is reporting more than 11,000 new cases per day, on average, while only about 2,400 cases each day would be expected because of increased testing. California and Texas numbers are also far above what would be expected.

How Coronavirus Cases Compare With Expectations

The charts show how the number of reported cases compares with the expected count based on expanded testing. The gap for states with more cases than expected is highlighted. Each state is on its own scale.

In some states with smaller outbreaks, case growth outpaces testing growth by large percentages. In Idaho, there are more than five times as many cases as would be expected with expanded testing. In Nevada, there are six times as many.

In 14 states and Washington, D.C., testing has increased faster than cases have, meaning positive test rates are falling. Many of those states are in the Northeast. In New York — the epicenter of the outbreak early on — cases have continued to decline, even with more than 60,000 tests performed daily. In five states, cases are about what would be expected.

These numbers come from an analysis of data from the COVID Tracking Project, a volunteer organization that records the number of tests conducted and cases reported in every state.

To calculate how expanded testing could affect case counts, The Times looked at the average positive test rate in each state for the two weeks ending June 9, when cases reached a recent national low. Those rates were then multiplied by the number of tests done each day since, in order to arrive at the expected number of cases given the current level of testing.

These calculations assume that the severity of the outbreak in each state would remain about the same and that positive test rates would hold as testing expanded. This is the most that cases would increase as a result of increased testing.

As tests become more widely available and more people who are not sick take them, positive test rates should fall.

Instead, the United States is seeing the opposite: More tests are being conducted, but more are coming back positive, driving case counts even higher.

Coronavirus Tests and Positive Test Rate in the United States

The positive test rate is now over 8 percent nationally, up from a low of less than 5 percent in June. That growth is a startling indicator that suggests the outbreak is worsening in a way testing alone cannot explain.