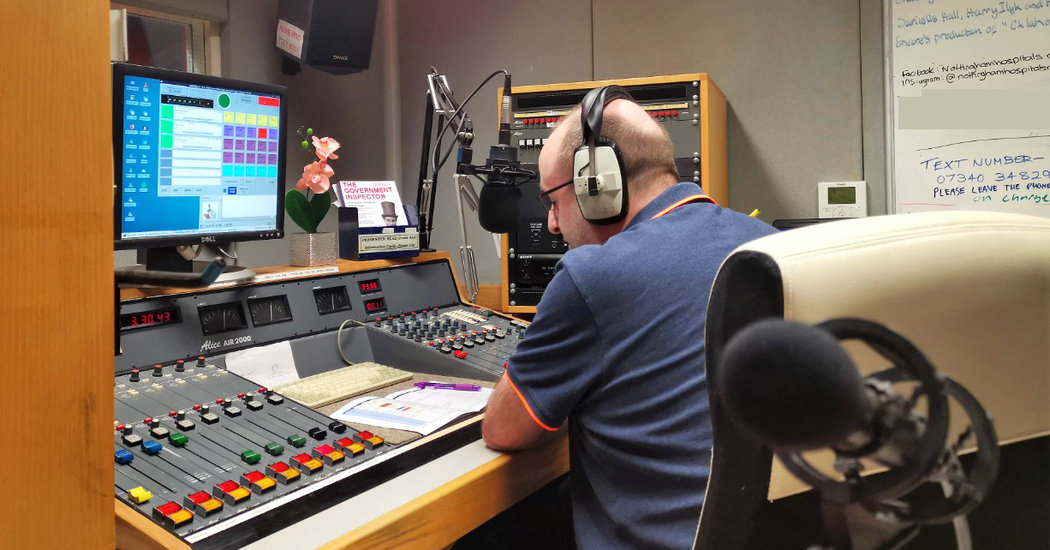 LONDON — Last Wednesday, Steve Coulby, a D.J. for Nottingham Hospitals Radio in England, read out a request from a patient battling Covid-19.

“Brian, you’ve given me an awesome responsibility, as you’ve asked for ‘any jazz,’” Mr. Coulby said. “I have to admit,” he added, “what I know about jazz is limited.”

Mr. Coulby then told his listeners he’d spent much of the day searching jazz tracks online, looking for one that might aid Brian’s recovery, or at least lift his mood. He decided on “Let Me Into Your Heart” by the British singer Isaac Waddington.

“I hope it’s good enough, Brian,” Mr. Coulby said, with a nervous laugh. “To be honest, it’s all you’re getting.”

Britain’s hospital radio stations are one of the less well-known features of its health system: tiny operations, staffed by volunteers, that you would never know existed unless you’d been a patient here.

Patients can normally listen to the shows, which are heavy on chart music and old hits, using headphones connected to an entertainment unit beside their beds. In some cases, the shows are even played out of speakers on the wards or in the emergency room waiting area.

The end of hospital radio has been declared many times over in Britain. Some hospital stations have struggled to raise funds, while the rise of smartphones filled with music and radio apps has meant patients have less need for them. But there are still over 200 such stations, according to the Hospital Broadcasting Association, and some claim they have found themselves more useful than ever during the pandemic, providing a human connections to patients who would otherwise be alone.

The stations mainly exist to play patient requests, which D.J.s collect by going around the wards, said David Hurford, the chairman of Radio B.G.M., a community broadcaster in Wales, in a telephone interview. “It’s quite an old-fashioned concept, going in and speaking to people,” he said, “but you get such an instant response from patients who might not have seen a friendly face in days.”

But the coronavirus pandemic had changed that, Mr. Hurford said. When Britain went into lockdown in March, most hospitals banned visitors. Many D.J.s had adapted by broadcasting from home or asking nurses to collect requests on their behalf, he said.

Lisa Wells, a nurse treating Covid-19 patients at the Queen’s Medical Center in Nottingham, said in an email that she had been happy to collect requests because the radio was good for patients’ families as much as for the patients themselves. It gave people peace of mind “that somebody’s just gone that extra mile to personalize what is such a dreadful time,” she said.

Mr. Coulby said that he had expected Nottingham Hospitals Radio to close as soon as lockdown began, especially since its studio was in a hospital right near where Covid-19 patients were being treated. “But it became quickly apparent the hospital wanted us,” he said. “Patients were getting bored, and felt alone and isolated.”

Mr. Coulby wasn’t the obvious choice to become the station’s anchor in that moment: He had only started volunteering in December, and was still learning the ropes when the pandemic hit, he said. But he was the only volunteer who lived within walking distance of the hospital, so he found himself hosting three request shows a week.

The experience had been challenging at times, he said: There was no getting away from the fact that many people making the requests were dying. “A few weeks ago, someone on the palliative care ward for Covid patients asked for Frank Sinatra, ‘My Way,’” Mr. Coulby recalled. “If someone asks for that, you know exactly why they want it,” he added.

Playing the song “made me a little emotional, and a little scared, if I’m being honest,” Mr. Coulby said. But he said he felt a responsibility to give the patient a few minutes respite from the disease, to just “enjoy looking back on happy memories.”

That was why hospital radio existed, Mr. Coulby said: “We’re there for these moments.”

On last Wednesday’s show, Mr. Coulby didn’t read out any requests as poignant as “My Way.” He gave the show an 1980s theme, playing songs by Wham! and Adam and the Ants, but also found time for a prerecorded guest slot from the hospital’s chaplain, who read out a guided meditation for patients to practice in their beds. “I’m a little relaxed myself after listening to that,” Mr. Coulby said, when the slot finished.

Mr. Coulby seemed to be trying to avoid mentioning the coronavirus during the show, but sometimes the disease and its impact on Britain slipped into his patter. At one point, he read out a request from a Karen, an employee in the hospital’s human resources department. She wanted to hear “Drive” by The Cars, a hit in Britain in the 1980s.

Mr. Coulby couldn’t resist a joke. “You shouldn’t be driving, Karen,” he said. “You should be staying home.”