You Are Here Home Health News This drug can treat 90 per cent of cystic fibrosis patients, but it’s not available in Canada 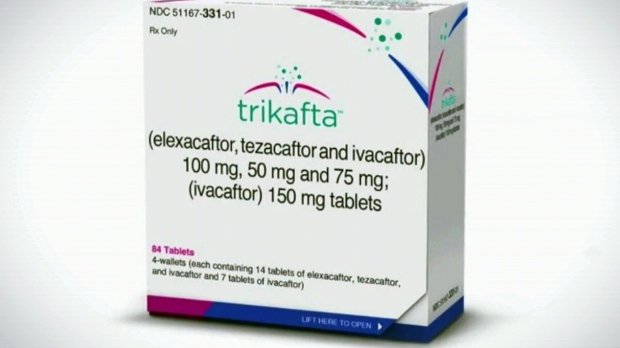 TORONTO — Struggling to breathe is one of the main symptoms of the novel coronavirus that has recently swept across the country. But for Nicole Stringer, who suffers from cystic fibrosis, it’s been the reality for her entire life.

For Stringer, every breath is a battle. Now, she’s fighting for access to a drug that could change that.

The Kelowna, B.C. woman was born with cystic fibrosis (CF), a genetic disorder that causes mucus to clog her lungs and damages her organs. On top of that, Stringer is also infected with a superbug, a bacteria called Pseudomonas aeruginosa which can’t be killed by antibiotics.

Stringer uses puffers, an oxygen machine and takes a hundred pills every day to control symptoms like fever and nausea. But she’s still constantly in and out of hospital, and plagued by the knowledge that at any time, her lungs could fail.

Her best friend, also a CF patient, recently succumbed to the disease.

Stringer has tried every treatment — including travelling to the U.S. to become the first Canadian CF patient to try an experimental treatment called phage therapy, which uses viruses to kill bacteria. No treatment so far has truly helped.

“I have developed resistance to almost all of the antibiotics that I can take,” she told CTV News. “So now I have lung infections that are just doing what they’re going to do and I have nothing to fight them with anymore, so I am going to continue to get sicker.”

COVID-19 poses yet another risk to Stringer’s life, and has kept her isolated indoors for months.

But she sees hope for her declining health in the form of a drug that is already improving the health of CF patients in the U.S.: Trikafta.

Cystic fibrosis is caused by mutations in a specific gene, which create a faulty protein. Trikafta works by targeting that mutation to help the defective protein work more efficiently, with signs it can slow or even stop the progression of the disease.

“Within a week’s time many people have had less mucus, they can run up the stairs, they can play with their kids, so it is a drug that’s life changing, it’s transformational for people with a fatal genetic disease,” Kelly Grover, CEO of Cystic Fibrosis Canada, told CTV News.

Trikafta is a combination of three drugs: elexacaftor, tezacaftor, and ivacaftor. The therapy can potentially treat up to 90 per cent of CF patients, according to a press release by Vertex Pharmaceuticals Incorporated, the company behind the drug.

However, Stringer can’t access it, because it’s not approved in Canada.

“To have something that … is life-changing that it’s right there, but we can’t grab it, is the most frustrating thing of my life,” she said.

Trikafta has made all the difference to Stephi Lee, an American artist and online influencer. Several American patients have documented significant improvements on their YouTube channels.

“Listen to this,” Lee says in one video. She inhales. “I didn’t even cough.”

Part of the frustration for Canadian patients is that the drug was fast-tracked for approval in the U.S. last year, where studies show it helps to improve lung function by up to 14 per cent.

Grover said it was “horrendous” that we haven’t seen any progress towards approving the drug here, considering it was approved so quickly within the U.S.

“In the U.K. they are fast-tracking its approval, Ireland and Switzerland have said they will fund it as soon as it becomes approved,” she said. “And so every country seems to be clamouring to get its hands on this drug for people with CF, and in Canada we can’t even get it into Health Canada for safety reviews. So we’re very concerned.

“Patients are really being held hostage in Canada because of that.”

Cystic Fibrosis Canada is calling on Canadian governments and regulators to collaborate with each other and manufacturer Vertex in order to accelerate the approval of Trikafta in Canada, so that it can be made available to patients there.

According to Cystic Fibrosis Canada, in order to get to a Canadian price, the manufacturer must first apply for Health Canada approval of the drug, after which Canada’s drug review and reimbursement processes kick in. The Patented Medicine Prices Review Board will determine the maximum price a company can charge for a new patented drug sold in Canada. What public and private insurers pay is negotiated with the company. A body called the pan-Canadian Pharmaceutical Alliance negotiates the price that consumers will actually be paying on behalf of the provincial, territorial and federal programs.

The estimated cost for one Trikafta patient in Canada could be more than $400,000 a year.

And Vertex hasn’t even applied to sell it here, amid speculation it would not be approved at that price.

An evidence report put out on April 27 by the Institute for Clinical and Economic Review (ICER), an independent watchdog for drug pricing in the U.S., investigated Trikafta and three other CF treatments by Vertex.

ICER gave the drug their highest “A” evidence rating a vote of confidence in the drug’s transformative effect on patients’ lives but added that the price was far too high.

They estimated that the health-benefit price benchmark for Trikafta should be between US$67,900 and US$85,000 per year, which would require a 73 to 78 per cent discount from the drug’s current listed price.

In a press release for the report, David Rind, ICER’s Chief Medical Officer, said that “despite being transformative therapies, the prices set by the manufacturer  costing many millions of dollars over the lifetime of an average patient  are out of proportion to their substantial benefits.

“When a manufacturer has a monopoly on treatments and is aware that insurers will be unable to refuse coverage, the lack of usual counterbalancing forces can lead to excessive prices,” Rind said.

“Patients who receive the treatments will benefit, but unaligned prices will cause significant negative health consequences for many unseen individuals  those throughout society who will experience financial toxicity and may have to delay care, forego care, or even abandon insurance as their out of pocket costs and premiums are driven upward.”

But Canadian doctors and patients say that the drug being unavailable in Canada doesn’t fix the price problem.

“I think we need a long-term solution,” Dr. Pearce Wilcox, a respirologist at St. Paul’s Hospital, told CTV News. “We recognize that medication like this and others are very expensive medications and that’s the reality and the public system will have challenges in coming up with that funding.

“On the other hand … cystic fibrosis is a rare disease. So, the long term solution is we need some type of strategy that recognizes rare diseases and the challenges of costs for these medications.

“In the shorter term, there needs to be some of innovative approach,” to allow patients to get access, he added.

The pharmaceutical company does provide a compassionate care program that allows the sickest patients to have access to medication at a discount, but many patients dealing with a lot of suffering in their day to day lives still will not qualify for that, Wilcox said.

“I think everybody has the right to a life-changing drug,” Grover agreed. “I think at this stage we need to get it into the queue, so that the public and private payers can negotiate with the manufacturer to [a] price that makes sense to the Canadian system. And right now we can’t even get it into the queue to assess its safety.”

The population of Canadians with cystic fibrosis is around 4,300, “so you’re talking about thousands that this [drug] could help,” Grover said.

Wilcox said he has been working with cystic fibrosis patients for more than 20 years, and has seen a lot of initiatives introduced over the years to improve care.

But Trikafta is in “the game-changer category,” for him in how much it can improve quality of life and slow the progression of the disease.

“There is a medication that has the chance of making a dramatic difference in their, their outcome, and yet … we have very limited access to this compound,” he said.

For Stringer, the drug feels like her last chance.

“If I don’t get Trikafta, I’m going to continue to get sicker,” she said. “I could be one infection away from dying. That’s really all it takes, is one infection.

“The life that I have right now is not life,” she added. “I’m at home all the time, I need oxygen a lot of the time. I barely have enough energy to get up and go into my living room. I’m 28 years old and I don’t have a life.”

Stringer made her own urgent appeal directly to Vertex, through Health Canada’s Special Access Programme  the only way a Canadian can access medication not yet available for sale in Canada  but was turned down.

There is a government push to assist her, led by Conservative MP Dan Albas from B.C.

On May 4, he and 58 MPs signed a letter addressed to Health Minister Patty Hajdu asking what she is doing to ensure that Canadians get access to the drug.

In the letter, they mention that Vertex has “signalled their willingness to negotiate and conclude a Price Listing Agreement with the pan-Canadian Pharmaceutical Alliance.

“During the negotiation period, they have offered to supply their drugs to Canadians suffering with CF for free,” the letter continues.

“As the Minister of Health, please provide us with an update on what you are doing to support the negotiations with Vertex and ensure that Canadians have access to these life-saving and life-changing drugs.”

Stringer, and other patients like her, are waiting to see if anything comes of the letter, and if Trikafta will come to Canada or not.

In the meantime, Canadian patients with cystic fibrosis will have to remain in limbo, caught between hope and reality.