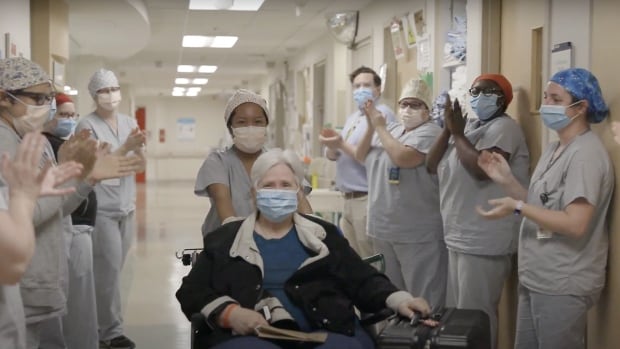 Helen Keene lay in her hospital bed on Wednesday while her mind raced.

It had been 41 days since she entered the COVID-19 unit at St. Joseph’s Healthcare Hamilton and she had just tested negative for the virus — but needed one more test to set her free.

Moments later, the 71-year-old sat in her wheelchair with luggage in hand as health-care workers lined the hallway clapping and cheering as she passed them. Keene’s cheeks lifted and eyes flooded with liquid joy as she shook her head in disbelief — after more than a month, she was finally leaving and free of COVID-19.

“To say it was overwhelming would be the understatement of the century,” Keene told CBC News.

“Why am I still here, why was I one of the ones that survived this?”

The virus has infected 512 people in Hamilton, forcing 72 into hospital and killing 25. Keene can now say she is one of the 372 who have survived.

Dying ‘goes through your mind’

She spent most days with a ball of yarn in her lap, crocheting. At the start of April, her days changed. The long-term care home staff told residents to keep their distance from one another because of COVID-19.

But it was too late for Keene, who picked up a cough that interrupted her every time she spoke. She says the coughing fits became so severe they bruised her ribs. Then she got a fever and soon after, she was zapped of her energy.

All of it was worrying, considering she had open-heart surgery only two years ago. After three to four sleepless nights spent coughing, Keene was sent to hospital.

Health-care workers were watching her heart, kidneys and her low white blood cell count. Keene wondered if she would need a ventilator and even thought about if she would ever leave the hospital.

“It goes through your mind,” she said.

She had to wait 14 days before her first COVID-19 test. It would be the first of six tests during her 41 day stay.

“The hardest part was getting those positives back and knowing that I was still infected,” Keene said.

She never needed a ventilator but the isolation was unbearable enough.

She tried to fill each long day with crocheting for her newborn great-granddaughter (she was born while Keene was in hospital) and a walk around her room when she had the energy for it. The other voids were filled with her own thoughts.

“You are virtually alone with your thoughts, your feelings, your emotions,” Keene remembered.

“You start to delve into ‘What have I got to offer, why am I still here?’ “

She did have company during the four brief daily visits from nurses, two visits from cleaners and emotional video calls with family each day.

But besides those moments and interactions, Keene said she felt like she was stranded in the middle of nowhere.

“I felt out of control and so alone at that point … you have nobody when you’re isolated like that, nobody that can hold your hand, no one that can tell you you’re OK,” she explained.

“Without my family … I don’t know if I could’ve survived emotionally.”

‘I will never be the same person’

Last Wednesday, May 6, the person Keene wanted to see most was her husband, who died two years ago. That day, COVID-19 teased her.

It was her fifth test for the virus after testing positive for weeks. Going into this test, she was feeling better. The test came back negative. She was elated — it was a glimmer of hope and all she needed one more test to be granted freedom.

But in a cruel twist of fate the second test came back positive. There were doubts about whether the test was performed properly but regardless, Keene’s chance to leave would have to wait another seven days until her next scheduled test.

“I had to wait for those two negative results and that was so agonizing,” she said.

To raise her spirits, the workers used the intercom to play, I’ll See You Again by Westlife — a song Keene uses to remember her husband.

“It was like they handed me a million dollars,” she said.

It kept Keene’s morale up for the next round of tests on Wednesday. This time, a high-five followed the results. Keene was free at last.

Her departure was met with an applause as workers clapped on Keene’s way out.

She’ll be staying with family for a few weeks before returning to Cardinal.

“I’m just one little speck in the whole fabric of what this virus has done to so many people … you have a lot of time to think about what you really value in life and believe me it’s not material things,” she said.

“I will never be the same, I have changed dramatically. My value systems changed, my appreciation of people has changed.”

The first thing she did when she got home was give her great-granddaughter a big, warm hug.