You Are Here Home Health News ‘This is such a serious disease’: Inside an ICU patient transfer as COVID-19 cases rise 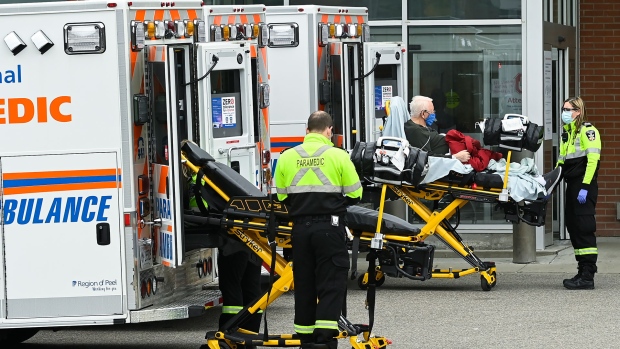 TORONTO — While patients get sicker and ICUs continue to fill up, critical care physicians are transporting patients between hospitals to free up beds in some of Ontario’s hardest hit regions.

Naomi Williams is a critical care paramedic and field training officer based in Mississauga, Ont. Williams transports critically ill patients in ambulances between hospitals in the Greater Toronto Area and its outskirts.

“I would like everybody to understand that this is such a serious disease. This is nothing that we’ve seen before. This has been affecting people who are younger and younger now with the variants – so I ask everybody just to follow the public health guidance,” Williams told CTV News on Friday.

Williams is a paramedic with Ornge, Canada’s largest medical air and land transport ambulance fleet. The fleet transfers patients from one busy ICU to a less busy one in hopes of easing the strain on overburdened facilities.

According to statistics from the health unit, ICU transfers related to COVID-19 are on the rise. Between Jan. 1 and April 8, Ornge says it transported 808 patients in an effort to free up ICU beds for severely ill patients.

These once-rare ICU transports are increasingly becoming the norm, Williams says, with COVID-19 patients transferred to hospitals as far away as Barrie, Ont., some 80 km to 110 km away from Toronto hospitals.

“It seems like this new variant, specifically in the third wave, seems to be hitting younger people far more aggressively than it has in the previous waves,” said Williams.

She explained that there aren’t typically many people in their 20s and 30s in the ICU, except for trauma-related injury or illness. However, she said that variants are now hitting younger people “far more aggressively” than it has in previous waves.

Williams added that doctors and nurses are feeling strained as they try to keep up with hospital admissions.

“We’ve pretty much been starting our shift where as soon as we come in, there’s already calls and they’re piled up and waiting for us,” said Williams.

While daily COVID-19 infections continue to climb in Ontario where officials said it’s near a worst-case scenario, the province is two days into its four week stay-at-home order. Ontario’s latest modelling data released last week said ICU occupancy could hit nearly 800 daily by the end of the month.

Williams said the lockdown is necessary and encourages people to follow directives from health officials.

“I would like everybody to understand this is such a serious disease. This is nothing that we’ve seen before. This has been affecting people who are younger and younger now with the variants so I ask everybody just to follow the public health guidance,” Williams said.