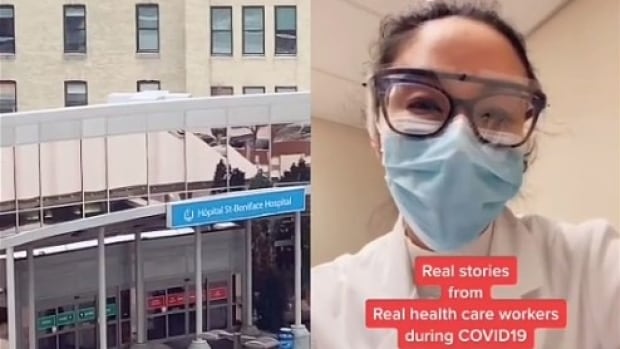 Opinions about COVID-19 inundate social media, but a Winnipeg doctor felt the voices of health-care workers weren’t being heard enough — so Gigi Osler takes her followers behind the scenes and into the hospital.

“We wanted people to hear the stories from the health-care teams, from the workers directly who are caring for patients, both COVID and otherwise, during the second wave of the pandemic,” Osler, a surgeon and past president of the Canadian Medical Association said Wednesday on CBC’s Information Radio.

“As we hear them talk, I feel an immense amount of gratitude towards them for their hope and their hard work and their courage.”

The first video has more than 24,000 views on TikTok alone while the third one, which features a registered nurse who contracted COVID-19 while at work, has been viewed more than 136,000 times on that platform.

“I’ve gotten the official approval to do some videos in the hospital, so stay tuned for real stories from real health-care workers working during COVID-19,” Osler said when she introduced the series about two weeks ago.

As of Wednesday, 14 videos in the Real Stories series have been posted.

“The credit for this actually comes from health-care workers themselves,” Osler said Wednesday.

“I was having a conversation with the nursing colleague a few weeks ago, talking about the messages we wanted people to hear over the holidays, and she said, ‘Wouldn’t it be wonderful to hear directly from the health-care workers working in the hospital?’

“St. Boniface Hospital got on board, fully collaborating with me, and we launched this social media campaign on Dec. 17 with plans to run it through Christmas and then through New Year’s. So a new story every day.”

The messages provide perspective on how the virus is hitting health-care workers, not only through the extremely long and frantic hours they are working, but through the empathy they have for patients and families.

The public health restrictions limiting the number of people entering the intensive care ward to see dying loved ones have been particularly hard, Osler said.

“They have to ask families to select just two or three people who can come in, and that is heartbreaking,” Osler said about the story one ICU nurse told.

“You can see and you can hear the devastation in her voice and on her face, so a lot of the work is not only taking a physical toll, but it’s really taking an emotional toll on these health-care workers.

“There are folks who honestly felt too emotional to be able to speak about anything that they’ve seen or worked through.”

Osler has heard criticism of the series, with some people commenting that if the workers are so busy, perhaps they shouldn’t be making videos.

“When I had permission to go onto the clinical wards, it was to talk to people for literally two minutes, usually when they were on their lunch break or coffee break,” she said.

“So we weren’t taking any time away from patient care. It was just a matter of finding somebody who was on a break and able to talk, and as you can see, they’re very short clips.

“I would just ask people, how are you doing? What are you feeling? What’s it like to work? And they would have instantly a story to tell and a message they wanted the public to hear.”

Though many stories outline struggles, there are also messages of hope and messages of thanks to Manitobans for doing their part to stay home and flatten the curve, Osler said.

“[They’re] really encouraging people to keep doing that over the holidays, because it feels like the light is at the end of the tunnel,” Osler said. “But we’re not there yet.

This is not the first time Osler has used social media platforms to get her messages about COVID-19 across to a wider audience.

In March, she began making videos to educate people about the virus and how to reduce its spread by properly washing hands and wearing a face mask.