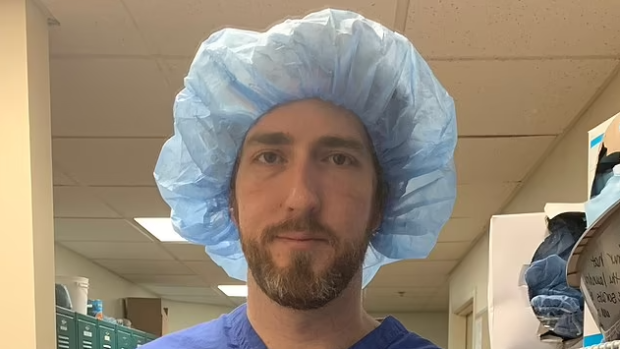 TORONTO — By the time Dr. Will Flanary was 29-years-old, he had already survived cancer – twice. So the ophthalmologist, who moonlights as a comedian on social media, knows well the importance of laughter as a prescription for coping with bad news.

Better known as Dr. Glaucomflecken to the rest of the world, his humour has been a bright spot for his 1.3 million TikTok and 472.9K Twitter followers looking for a bit of levity amid the stress and gloom of the COVID-19 pandemic.

Flanary’s short videos poking fun at medical specialists, the U.S. Centre for Disease Control and Prevention (CDC), the absurdities of the U.S. health-care system, and debunking medical myths have racked up more than more than 47 million views on TikTok alone.

“If I’d known that it would turn into this I would have chosen an easier name to say. Honestly, it’s surreal,” Flanary told CTV National News in a video interview from his home in Portland, Ore.

Flanary had been doing stand-up comedy intermittently since high school, but always wanted to go into medicine. He registered for a Twitter account out of boredom while attending a conference several years ago during medical school and began using it as a surrogate for telling jokes on stage.

“It’s just been a very serious field. And there’s this prevailing notion that doctors can’t show who they really are. They can’t be funny. They can’t have a sense of humour because that’s not professional,” Flanary said.

One of his most popular recent videos, which pokes fun at the latest CDC guidelines recommending shorter isolation periods for asymptomatic COVID-19 cases, has already garnered 6.4 million views on TikTok after the guidelines were widely criticized.

“If you don’t have any symptoms, you don’t feel tired, you can go back to work,” his CDC character tells a colleague in the video.

“OK, but everyone’s tired all the time, can you trust people to know if they’re asymptomatic?” the other character (also portrayed by Flanary) responds, before offering alternative suggestions that end up being significantly watered down.

Another video depicts a patient agreeing without hesitation to a full body CT scan, lumbar puncture, colonoscopy, brain biopsy, and “an experimental surgery where we replace your spleen with a second liver.”

“And let’s go ahead and get you a COVID vaccine,” Flanary, posing as the doctor, concludes.

“I just don’t know if I can trust you,” Flanary the patient responds.

His pandemic content on vaccinations have garnered the most negative response but he tries not to pay too much attention to the angry comments and messages, he says.

“There’s no benefit to it. You know, you’re just going to spiral and it’s gonna affect your real life outside of the internet,” he said.

“If you trust your content, if you trust the message, then you’ve got to just go with it and accept that.”

DEALING WITH CANCER AND A HEART ATTACK

For Flanary, who survived two bouts of testicular cancer, the videos have been therapeutic, but they have also allowed him to fundraise over US$100,000 for First Descents, a non-profit that provides outdoor adventures for young adults impacted by cancer and other serious health issues.

“The second time around was a little bit more difficult, just physically and mentally and emotionally and I needed something to help me cope with the fact that I had already had cancer twice and I was only at that point 29-years-old,” he said. He has two children now and is grateful his wife Kristin – known on Twitter as Lady Glaucomflecken – convinced him to start their family during medical school.

“Thank God she did because, you know, I don’t know where we’d be at this point.”

But cancer is not the only challenge Flanary has faced. In May 2020, he went into cardiac arrest in the middle of the night in his sleep, according to media reports. His gasp for breath woke up his wife, who performed CPR for 10 minutes until paramedics arrived and resuscitated him, according to an interview with Today. The cause for the heart attack remains a mystery.

“If you can laugh over a shared experience, that can bring you together more than almost anything else,” Flanary said.

“It feels good to laugh. And it feels good to be laughing with someone that knows what you’re going through and knows the things that have been happening inside your own head that you haven’t put out into words.”

The humour not only allows him to connect with his audience, but it can also help patients and doctors, says Dr. Dolores McKeen, the president of the Canadian Anesthesiologists’ Society. She first came across Dr. Glaucomflecken four or five years ago.

“Medicine can be very hard, and I think really his type of humor keeps us humble. It actually allows us to be compassionate,” she said in an interview.

One of Flanary’s most popular videos, which pokes fun at anesthesiologists, has over seven million views. He also skewers emergency medicine and surgeons, but says he is careful around practices that are more sensitive or do not get the respect they deserve, like primary care doctors and pediatrics.

“It feels good to make people in medicine laugh, especially during a time right now – during the pandemic when it’s hard for people to find things that make them smile,” he said.

There is a lot of evidence that shows humour can be protective of burnout, says McKeen.

Flanary says the videos have taken him to a place he never expected, and he’ll continue doing it as long as his audience still watches and he continues to enjoy it. His Dr. Glaucomflecken alter ego has been a balm, not only for his colleagues, patients, and a pandemic-weary public, but also for himself.

“That’s kind of the way it works with me with humor. It’s my coping mechanism … Sometimes that’s all you can do, right? And it does help you put a different perspective on things.”