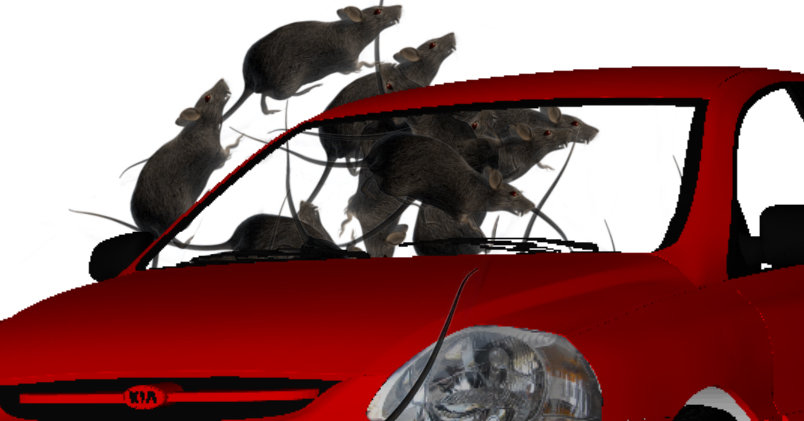 You might want to make sure there’s not a rat living (or recently dead) in your car’s engine.

Why are you still reading? Check your car for a rat, I said. That’s the tip. Rats like it in there, and while they could take up residence in a car engine at any time, anecdotal reports (and mankind’s modern if imperfect knowledge of rat behavior) suggest the phenomenon may be occurring more frequently right now.

Three line breaks into this story, it is becoming increasingly clear that the depth of your interest in rats plunges far deeper than basic car maintenance tips. You are a person who seeks to understand rats in a way that rats may not even understand themselves. You want to read the invisible instruction encoded in a rat’s brain that compels him to abandon the deli dumpster where he has spent the majority of his short life and, all of a sudden, carry a leaf and perhaps some twigs into the engine of your Jetta. OK. Here is more rat information:

What Happens When Rat Meets Engine?

Tuesday was the first time in about a week that Kelsey Snell and her husband had attempted to drive their car. A clue that something was amiss came from the vehicle’s internal alert system.

“It gave us a really weird error message as we were driving away,” said Ms. Snell, 36, a congressional correspondent for NPR who lives in Washington.

The second clue was the rat fleeing their driveway.

“I’ve never seen rats in our driveway before,” said Ms. Snell, “and then we started driving a little bit further and the error message” — an alert about the car’s exhaust system — “got a little more insistent.”

Ms. Snell and her husband abandoned their errand (a birthday flower delivery). Back in their driveway, they popped the hood, revealing, she said, “poop all over the engine,” as well as “a puddle of rat urine,” leaves, sticks and small bones.

“WE HAVE RATS LIVING IN THE ENGINE,” Ms. Snell wrote in a cautionary tweet about the incident. “The dealership said we are the FIFTH people to call this week with this problem.”

Ms. Snell, who has never previously shared her car with a rat, confirmed by phone that an employee at her local service center told her that such incidents have become “all of a sudden super common” within “the past two or three weeks.”

Her bill for the replacement of chewed-through wires was around $400. It’s not uncommon for such repair costs to run into the thousands.

What Does a Rat Want With Your Engine?

Michael H. Parsons, a visiting research scholar at Fordham University who studies the city rats of New York, said that car engines evoked rats’ ancestral homes: dark, warm burrows with easy access to chewable roots. (The common brown rat appears to have arrived in North America around 1775, perhaps when European ships docked at Manhattan’s South Street Seaport; the species is believed to have originated in Asia.)

To rats, said Dr. Parsons, state of the art vehicular wiring systems are “surrogate roots.” Not because they provide the moisture or nutrient access of real roots, but because they somewhat resemble them and are chewable.

Rats “get a certain amount of comfort by just chewing,” said Michael Deutsch, an urban entomologist and the technical director of the Arrow Exterminating Company, headquartered on Long Island.

In fact, the word “rodent” comes from the same Latin root as “erode” — rodere, meaning “to gnaw.” Rats must gnaw, and constantly, because their sharp, hard incisors grow continuously throughout their lives — around four or five inches a year.

“If they don’t keep them trimmed,” said Mr. Deutsch, “they might not be able to open or close their jaw. In some extreme cases, their bottom incisors have grown up into the upper roof of their mouth. And, of course, they died.”

Because of their impulse to chew, rats frequently destroy material that offers no nutritional value to them. The inherent appeal of car wiring, Dr. Parsons said, is complemented by the fact that, in recent years, many car manufacturers have switched from petroleum-based wire insulation to greener, less expensive soy-based kind.

While rat infestations in car engines are not rare occurrences, researchers are attempting to determine whether they are increasing in areas where rats’ usual food and harborage sites have been disrupted by pandemic distancing efforts. A restaurant that is no longer serving food to humans is also no longer producing large quantities of human food garbage — sustenance for city rats. (Rural rat populations, which are less likely to rely on commercial food waste, may not be experiencing the same scarcity.)

“Movement distances and patterns are really tightly linked to the availability of resources like food, places to burrow and mates,” said Kaylee Byers, a Ph.D. candidate at the University of British Columbia who works with the Vancouver Rat Project, an urban research initiative. “With fewer resources, rats will move further than they would normally or may migrate from places that previously had food to areas where food is more plentiful.”

Dr. Parsons said that while usual rat migration is primarily limited to omega males (the lowest rung of the rat social order, ranked below alpha and beta male rats), it now “appears that all affected rats are migrating” — a circumstance that “greatly increases competition, and stress, and presumably causes rats to be more aggressive and visible during daylight hours.”

The bad news, then, is that an increased number of rats may be looking for food in your vicinity, and these rats may be more stressed, desperate and aggressive than usual. The good news is that at least some of them may have a certain élan, relative to other rats.

Dr. Parsons is working on a study that draws on accounts from other researchers and pest control experts in North America, Europe and Asia that detail how rats “are migrating en masse from closed restaurants, delis and arenas” to new environments. An alternative pandemic hypothesis, he said, is that “nothing is happening, and people are just noticing rats more” perhaps because they are spending more time than usual walking around their neighborhoods, or exercising outdoors.

Can You Keep a Distressed Rat Out of Your Engine?

You might decrease the odds of harboring rats in your car, Dr. Parsons said, by avoiding parking over sewers and drainage catch basins “as rats utilize these to move above and below ground.” He also recommended starting your car and moving it from time to time, and inspecting under your car’s hood (while wearing a mask) “for obvious gnawings and rat droppings.”

However, his primary concern when it comes to rodents and coronavirus is less car-specific than rat-general: that people will overlook rat control while preoccupied with airborne virus transmission.

“Rodents can carry leptospirosis, toxoplasma, hanta, salmonella and ostensibly Covid-19,” he said. While there is currently no evidence rats can become infected with the virus, “they can transmit from paws or fur.” Besides spreading disease, rats can cause house fires by chewing through electrical wiring — and, of course, they can disable vehicles.

“Their nature,” said Mr. Deutsch, “is to explore. They do exhibit a behavior called neophobia, which is fear of new things. But they can overcome that.”