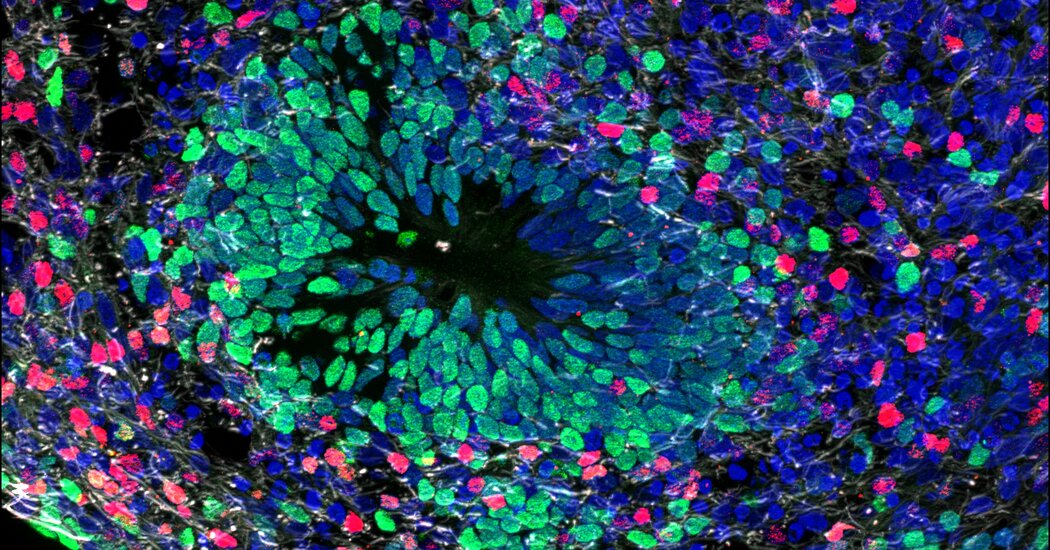 In recent years, scientists have figured out how to grow blobs of hundreds of thousands of live human neurons that look — and act — something like a brain.

These so-called brain organoids have been used to study how brains develop into layers, how they begin to spontaneously make electrical waves and even how that development might change in zero gravity. Now researchers are using these pea-size clusters to explore our evolutionary past.

In a study published on Thursday, a team of scientists describe how a gene likely carried by Neanderthals and our other ancient cousins triggered striking changes in the anatomy and function of brain organoids.

As dramatic as the changes are, the scientists say it’s too soon to know what these changes mean for the evolution of the modern human brain. “It’s more of a proof of concept,” said Katerina Semendeferi, a co-author of the new study and an evolutionary anthropologist at the University of California San Diego.

To build on the findings, she and her co-author, Alysson Muotri, have established the UC San Diego Archealization Center, a group of researchers focused on studying organoids and making new ones with other ancient genes. “Now we have a beginning, and we can start exploring,” Dr. Semendeferi said.

Dr. Muotri began working with brain organoids more than a decade ago. To understand how Zika produces birth defects, for example, he and his colleagues infected brain organoids with the virus, which prevented the organoids from developing their cortex-like layers.

In other studies, the researchers studied how genetic mutations help give rise to disorders like autism. They transformed skin samples from volunteers with developmental disorders and transformed the tissue into stem cells. They then grew those stem cells into brain organoids. Organoids from people with Rett Syndrome, a genetic disorder that results in intellectual disability and repetitive hand movements, grew few connections between neurons.

Dr. Semendeferi has been using organoids to better understand the evolution of human brains. In previous work, she and her colleagues have found that in apes, neurons developing in the cerebral cortex stay close to each other, whereas in humans, cells can crawl away across long distances. “It’s a completely different organization,” she said.

But these comparisons stretch across a vast gulf in evolutionary time. Our ancestors split off from chimpanzees roughly seven million years ago. For millions of years after that, our ancestors were bipedal apes, gradually attaining larger heights and brains, and evolving into Neanderthals, Denisovans and other hominins.

It’s been difficult to track the evolutionary changes of the brain along the way. Our own lineage split from that of Neanderthals and Denisovans about 600,000 years ago. After that split, fossils show, our brains eventually grew more rounded. But what that means for the 80 billion neurons inside has been hard to know.

Dr. Muotri and Dr. Semendeferi teamed up with evolutionary biologists who study fossilized DNA. Those researchers have been able to reconstruct the entire genome of Neanderthals by piecing together genetic fragments from their bones. Other fossils have yielded genomes of the Denisovans, who split off from Neanderthals 400,000 years ago and lived for thousands of generations in Asia.

The evolutionary biologists identified 61 genes that may have played a crucial role in the evolution of modern humans. Each of those genes has a mutation that’s unique to our species, arising some time in the last 600,000 years, and likely had a major impact on the proteins encoded by these genes.

Dr. Muotri and his colleagues wondered what would happen to a brain organoid if they took out one of those mutations, changing a gene back to the way it was in our distant ancestors’ genomes. The difference between an ancestral organoid and an ordinary one might offer clues to how the mutation influenced our evolution.

It took years for the scientists to get the experiment off the ground, however. They struggled to find a way to precisely alter genes in stem cells before coaxing them to turn into organoids.

Once they had figured out a successful method, they had to choose a gene. The scientists worried that they might pick a gene for their first experiment that would do nothing to the organoid. They mulled how to increase their odds of success.

“Our analysis made us say, ‘Let’s get a gene that changes a lot of other genes,’” said Dr. Muotri.

One gene on the list looked particularly promising in that regard: NOVA1, which makes a protein that then guides the production of proteins from a number of other genes. The fact that it is mainly active only in the developing brain made it more attractive. And humans have a mutation in NOVA1 not found in other vertebrates, living or extinct.

Dr. Muotri’s colleague, Cleber Trujillo, grew a batch of organoids carrying the ancestral version of the NOVA1 gene. After placing one under a microscope next to an ordinary brain organoid, he invited Dr. Muotri take a look.

The ancestral NOVA1 organoid had a noticeably different appearance, with a bumpy popcorn texture instead of a smooth spherical surface. “At that point, things started,” Dr. Muotri recalled. “I said, ‘OK, it’s doing something.’”

Other experts were surprised that a single genetic mutation could have such obvious effects on the organoids. They had expected subtle shifts that might be difficult to observe.

“It looks like the authors found a needle in a haystack based on an extremely elegant study design,” said Philipp Gunz, a paleoanthropologist at the Max Planck Institute for Evolutionary Anthropology in Leipzig, Germany, who was not involved in the research.

Simon Fisher, the director of the Max Planck Institute for Psycholinguistics in the Netherlands, said the results must have come from a mix of hard work and some good luck. “There must have been some degree of serendipity,” he said.

Although the researchers don’t know what the changes in the organoids mean for our evolutionary history, Dr. Muotri suspects that there may be connections to the kind of thinking made possible by different kinds of brains. “The true answer is, I don’t know,” he said. “But everything that we see at very early stages in neurodevelopment might have an implication later on in life.”

At the new research center, Dr. Semendeferi plans to carry out careful anatomical studies on brain organoids and compare them to human fetal brains. That comparison will help make sense of the changes seen in the ancestral NOVA1 organoid.

And Dr. Muotri’s team is working through the list of 60 other genes, to create more organoids for Dr. Semendeferi to examine. It’s possible that the researchers may not be so lucky as they were on their first try and won’t see much difference with some genes.

“But others might be similar to NOVA1 and point to something new — some new biology that allows us to reconstruct an evolutionary path that helped us to become who we are,” Dr. Muotri said.