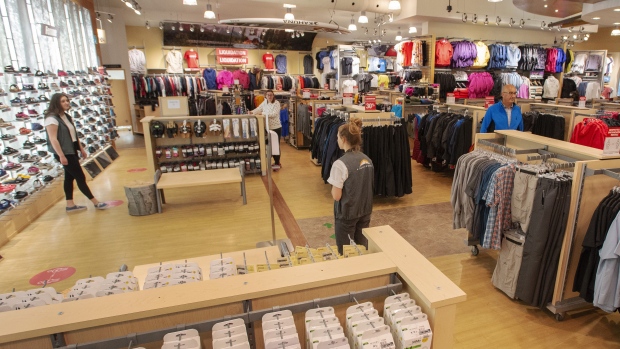 TORONTO — As more retailers across Canada are given the green light by provincial governments to reopen, shoppers are being urged to protect themselves and those around them against COVID-19 by continuing to follow public health guidelines.

Colin Furness, an assistant professor at the University of Toronto’s faculty of information and Dalla Lana School of Public Health, said he understands that people are eager to start visiting stores again after months spent at home in quarantine.

“I get it,” he told CTVNews.ca during a telephone interview on Wednesday. “Retail therapy is a term for a reason. I understand why people would want to be able to feel like normal life again.”

However, Furness stressed that the coronavirus isn’t gone yet and people still need to think about their safety and the safety of others when they visit a retailer.

“Going into a shop where there are other people is going to be a risky activity,” he said.

To avoid contracting the virus or spreading it to others when visiting stores, Furness has offered some tips on how to safely shop during the pandemic.

While he acknowledged that curbside pickup is not always an option for certain retailers, Furness said consumers should look for businesses that do offer the service because it’s much safer than going inside a store.

“I think that’s something that we should prioritize as much as we can,” he said. “Now, that’s not going to work for everything, but to the extent that we can.”

Furness said people should practise mindfulness when they’re considering where to shop and really think about whether they need to enter a store or if they just want to because of old habits.

Because people can contract the coronavirus if they touch an infected surface and then their faces, Furness said that shoppers need to be extra vigilant about their hand hygiene inside stores.

“You have to be so mindful about your hands,” he said. “What are your hands touching and where’s the hand sanitizer that you’re going to use before you touch your face again?”

Furness said that he brings a bottle of hand sanitizer with him every time he visits the grocery store and advises others to do the same.

The use of hand sanitizer is important in any store, Furness said, whether it sells groceries or clothes. He said touching the clothes themselves won’t make people sick, but there is a risk if they don’t sanitize their hands right after.

Furness said pin-pad payment machines can also be of particular concern if they’re not wiped down after every customer. He said the keypad is “extremely risky” because people use the tip of their finger to push the buttons on it.

“That’s the tip of the finger that goes in the nose, that goes in the eye, that gets that little thing in your teeth,” he said. “And obviously lots of people are pushing that and they’re plastic buttons, which means the virus will linger there for a while.”

Before visiting a store, Furness said shoppers should pay attention to how the space is arranged and if they have made allowances to keep customers apart.

“How well-equipped is the store to handle this? Is the store configured so that aisles are narrow and people have to get up close? Is the store limiting the number of people who can come in?” he said.

Furness said businesses will take different approaches so customers should be aware of those decisions and try to visit stores where they’re able to maintain a two-metre distance from their neighbour.

Some businesses have taken extra measures, such as staggering the change rooms in use, installing plexiglass barriers between cashiers and customers, and installing arrows or signs to indicate where people should walk or stand in line in the store.

While he disagrees that they should be worn all the time, Furness said shoppers should put on face masks when they’re inside stores to prevent spreading the virus to others.

“The only time the mask is helpful is when you are sharing indoor space with strangers or with people outside your household,” he explained.

Furness said people should take off their mask as soon as they go outside because its only function is to prevent the wearer from spreading droplets to others when they’re sharing an indoor airspace. He said they serve no purpose when they’re worn by someone who is walking around outside.

“Masks collect bacteria, bacteria proliferate, and then you inhale them,” he said. “Our respiratory system is not designed to have a filthy cloth in front of our mouth. It’s risky.”

The professor said the longer someone wears a mask, the more bacteria is collected on it and eventually the wearer will inhale that bacteria, which can be harmful to their health.

“There are worse things you can inhale than COVID-19 so we want to be very judicious with our mask use,” he said.

Furness stressed the importance of shoppers going out and doing their errands alone and not in couples or groups. He said there is no reason for two people in the same household to visit a store at the same time and potentially increase their risk of exposure or the risk to others.

“If you live with someone and you both go shopping, who’s going to take care of you if you both get sick at the same time?” he said. “Synchronizing your exposures is foolish.”

Furness said people should go outside and go for a walk together in their neighbourhood if they want to do an activity with another person.

“Shopping should not be done together,” he said.

Lastly, Furness said shoppers should be aware of the risk of community spread in their particular area at a given time before they decide to leave their homes and go shopping. He said the risk of infection is likely much higher in certain places, such as congested cities, than it may be in smaller communities so people should take that into account when they’re deciding if they want to go out.

“I think knowing and being aware of what the background community spread level is looking like and staying mindful of that,” he said. “I think that’s a helpful thing to think about.”