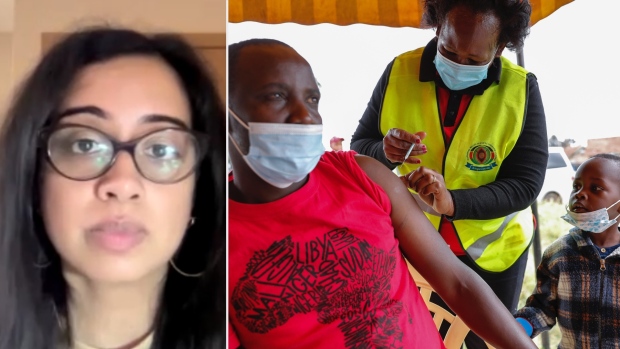 Canada must help lead vaccination efforts abroad in order to prevent the next dangerous variant and truly end the pandemic, one epidemiologist says.

“It’s not going to be over for a long time unless wealthier nations, like Canada, get your act together and realize that almost 3.3 billion people in this world have yet to receive their first vaccine,” Ananya Banerjee, a professor at McGill University’s epidemiology and biostatics department, told CTVNews.ca in a video interview on Tuesday.

Some estimates have that figure set at upwards of 3.5 billion people, which would mean about 43 per cent of the world have not yet received their first dose. The majority of this population live in lower-income countries, including some African countries, parts of Asia and Latin America, she said.

Banerjee says more needs to be done to show Canadians that the lockdowns and restrictions they face here are directly tied to the virus being allowed to spread and mutate in other countries. She says huge hurdles to vaccination rates in lower-income countries include strict intellectual property rights obligations preventing these nations from affordably manufacturing their own mRNA vaccines, and their governments being unable to negotiate with pharmaceutical companies for vaccine deliveries in the same way as wealthier countries.

While she says that front-line workers and vulnerable groups need a fourth dose of COVID-19 vaccines, Banerjee says more action is needed to get doses to countries which haven’t received their first shot.

See the full video above for more on what Banerjee says should be done.