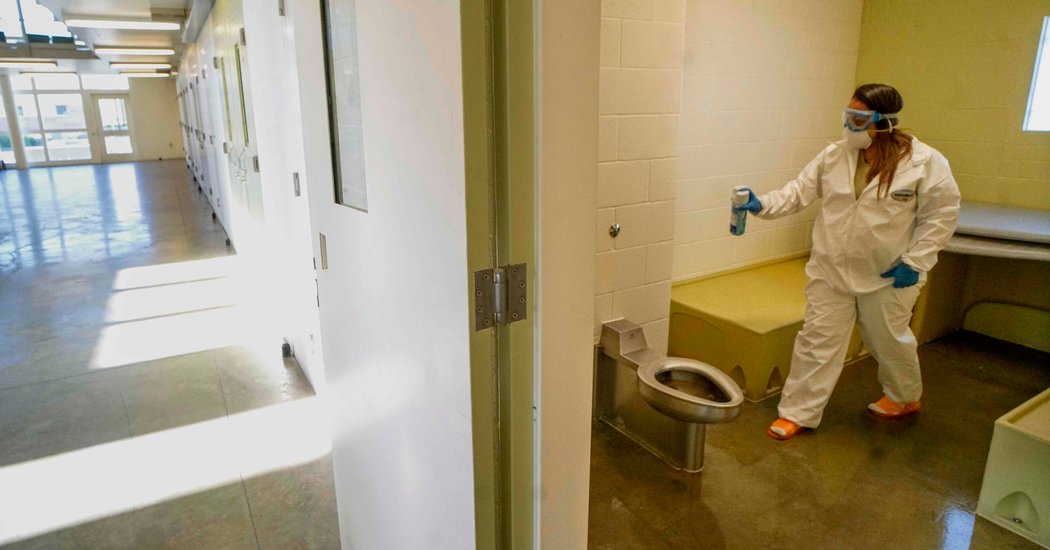 Jails and prisons are among the most challenging places to control the outbreak of the coronavirus. Similar to cruise ships and nursing homes, detention facilities have crowded living spaces and shared dining areas, as well as communal bathrooms and a lack of space to isolate infected detainees, all of which makes physical distancing practices difficult to achieve.

On Wednesday, the Centers for Disease Control and Prevention released a study of the spread of the coronavirus in prisons and detention centers in the United States, both public and private. Although it did not have complete figures for the approximately 2.1 million people incarcerated nationally, the study found that nearly 5,000 prisoners had contracted the virus along with over 2,000 staff members, resulting in 103 deaths in total.

“This analysis provides the first documentation of the number of reported laboratory-confirmed cases of Covid-19 in correctional and detention facilities in the United States,” the report said.

Among the findings, the report found that slightly more than half of the affected facilities (53 percent) had at least one case among staff members and not detainees. Staff members move regularly between facilities and outside communities, which could be important factors in introducing the virus into prisons, it said.

The arrival of new detainees also poses a risk, and the study noted that some jurisdictions like Puerto Rico have lowered or eliminated bail and introduced house arrest as a way to prevent new cases from entering prisons.

The C.D.C. warned that its data was incomplete; it was therefore unable to determine the percentages of infected prisoners and staff members across the country. It received data from the health departments of 37 states and U.S. jurisdictions; 32 of them reported at least one laboratory-confirmed case among 420 facilities. There are roughly 5,000 detention centers and prisons in the U.S., both public and private.

The C.D.C. recommended regular screening for symptoms, including taking prisoners’ temperatures and asking if they have coughs, when reliable testing is not available. It also suggested screening quarantined detainees and staff members twice daily in cases when they may have been exposed to an infected person, and then isolating suspected cases.

It urged staff members and prisoners to wear cloth face masks and for facilities to promote physical distancing, when possible, to disinfect shared surfaces and to provide soap free of charge. Prisoners should sleep head to foot; meal times and showers should be staggered; the number of people in common areas at one time should be reduced; and some group gatherings suspended.