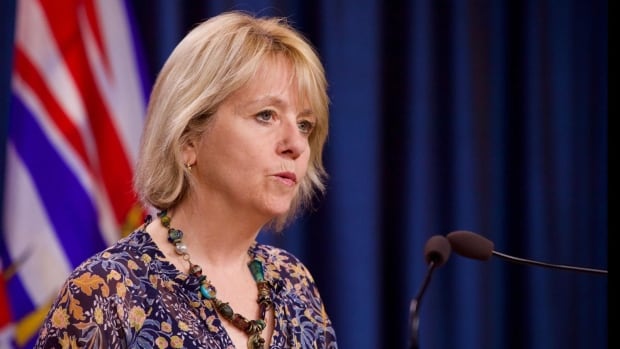 B.C. has recorded 16 new COVID-19 cases in the 48-hour period between Saturday and Monday, as the province prepares to enter Phase 2 of its pandemic response with a gradual reopening of businesses and services.

Speaking in a daily briefing on Monday, Provincial Health Officer Dr. Bonnie Henry said there have been two more deaths from the illness in the province.

The number of active cases in B.C. has declined by 54 per cent in the past three weeks.

Henry warned that as the province begins to reopen, the potential for a flare-up does go up.

“For many the transition brings anticipation — but it also brings further apprehension and anxiety as schools and businesses look to open once again,” she said.

“We are still learning the new ways of safe social interactions and doing things we’ve never had to do before. And that itself can cause new anxiety and concern.”

She said health authorities are ensuring they have the capacity to properly monitor, test, and conduct contact tracing as the risk increases, and implored B.C. residents to remain vigilant and aware of their own level of risk.

“We all have to move carefully and stay alert … As businesses and retail stores and salons start to reopen there’s an onus on all of us that we’re monitoring very well for symptoms and we do not go into work if we are feeling the least bit unwell and that we are able to be tested.”

Henry acknowledged that this period has been particularly difficult for people living and working in long-term care homes, and said she hopes that some family visits to those facilities will be able to resume in June, if the number of cases in the province continues to decrease.

Health Minister Adrian Dix said that as B.C. enters Phase 2 on Tuesday, B.C. residents must keep in mind that COVID-19 is present in every health authority across the province.

“Through our efforts to stop the spread, we’re giving our social, surgical and economical renewal the strongest change for a great start … throughout the summer and well beyond, physical distance remains our constant companion,” he said.

‘We will get through this’

With restaurants set to re-open with a number of restrictions in place, Henry acknowledged that along with the excitement of life returning to some sense of normalcy, there are also concerns and unease.

“It’s going to be a bit of an anxiety-provoking week for many many people,” she said.

Starting Tuesday, restaurants will be able to re-open at 50 per cent capacity, or while maintaining two metres between tables.

“There’s not a lot of science. It’s based on putting together a rational approach to how many people would create enough of a crowd that we would put others at risk and part of it is being able to find that physical space,” said Henry.

Dix said that travel on BC Ferries routes over the May long weekend was down 70 to 80 per cent from the same period two years ago.

“This indicates that while obviously there is travel going on in the province, people have been mindful of the guidance they have received,” he said.

Henry said that over 260,000 people have filled a provincial survey collecting information about how people in B.C. have been affected by COVID-19 and encouraged more people to take it, especially seniors, people who live outside of major urban centres, and people from different cultural backgrounds.

“Unless you look at it from that perspective, you don’t know if there is something that we’re missing in how people are being affected, either in a positive way or a negative way, both by the virus and by the effects of the restrictions that have been put in place,” she said.

Henry and Dix also both took a moment in the briefing to pay their respects after a deadly Snowbirds crash in Kamloops, B.C., which killed Capt. Jenn Casey and left another badly injured on Sunday.

Henry quoted a poem by an American pilot who was killed during a training flight in the Second World War, saying: “I think perhaps we might have some solace in knowing that Capt. Casey maybe truly has slipped the surly bonds of Earth and is dancing the skies.”

If you have a COVID-19-related story we should pursue that affects British Columbians, please email us at impact@cbc.ca.