You Are Here Home Health News Tracking the Coronavirus: How Crowded Asian Cities Tackled an Epidemic 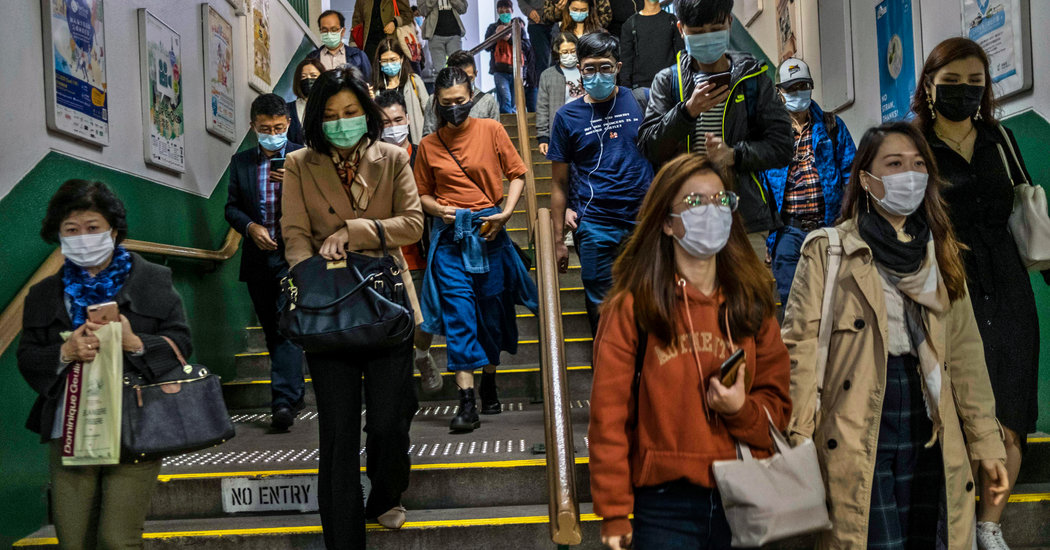 SINGAPORE — Two hours. That’s all the time medical teams in Singapore are given to uncover the first details of how patients contracted the coronavirus and which people they might infect.

Did they travel abroad? Do they have a link to one of the five clusters of contagion identified across the city-state? Did they cough on someone in the street? Who are their friends and family, their drinking buddies and partners in prayer?

As Western nations struggle with the wildfire spread of the coronavirus, Singapore’s strategy, of moving rapidly to track down and test suspected cases, provides a model for keeping the epidemic at bay, even if it can’t completely stamp out infections.

With detailed detective work, the government’s contact tracers found, among others, a group of avid singers who warbled and expelled respiratory droplets together, spreading the virus to their families and then to a gym and a church — forming the largest concentration of cases in Singapore.

“We want to stay one or two steps ahead of the virus,” said Vernon Lee, the director of the communicable diseases division at Singapore’s Ministry of Health. “If you chase the virus, you will always be behind the curve.”

Singapore, along with Taiwan and Hong Kong, offers successful approaches, at least so far, in battling a pandemic that has infected more than 182,000 people and killed at least 7,300 worldwide. Despite being hit months ago by the virus, these three Asian societies have recorded only a handful of deaths and relatively few cases, although they continue to face risks as people from emerging hot spots in the United States, Europe and elsewhere carry the virus with them.

Early intervention is key. So are painstaking tracking, enforced quarantines and meticulous social distancing — all coordinated by a leadership willing to act fast and be transparent.

In Singapore, the details of where patients live, work and play are released quickly online, allowing others to protect themselves. Close contacts of patients are quarantined to limit the spread. The government further strengthened its borders this week to protect against a new wave of imported infections.

Some of these lessons are too late for the United States and Europe, where contagion is raging as some governments delay and debate their response.

And the vigilant monitoring systems in Singapore, Taiwan and Hong Kong were built over years, after their failures to stop another dangerous outbreak — SARS — 17 years ago. The United States disbanded its pandemic response unit in 2018.

There is also the question of how replicable this model from smaller Asian centers is in large Western countries where people might chafe at the harnessing of C.C.T.V. cameras or immigration records for the health of the nation. Disease control infringes on individual liberties, and places like Singapore, where chewing gum was once banned, are more willing to accept government orders.

“Maybe it’s because of our Asian context, but our community is sort of primed for this,” said Lalitha Kurupatham, the deputy director of the communicable diseases division in Singapore. “We will keep fighting, because isolation and quarantine work.”

Rich and orderly, Singapore has spent years building a public health system that includes designated clinics for epidemics and official messaging urging the public to wash their hands or sneeze into tissues during flu season. The Infectious Diseases Act gives the city-state wide latitude in prioritizing the common good over privacy concerns.

“During peacetime, we plan for epidemics like this,” Ms. Kurupatham said.

As the leader of Singapore’s contact tracing program, she has been working 16-hour days for two months, and her depiction of a war against disease is a function of its vulnerability to contagion. A tiny red dot on a world map, Singapore is a densely populated island where every flight is international.

In the early days of the outbreak, Singapore was highly susceptible to a large population of mainland Chinese people arriving during the Lunar New Year holiday.

The dozens of confirmed cases in Singapore in January reflect widespread and freely available testing. Many were mild cases that would otherwise have gone undiagnosed. Nevertheless Singapore was sprinting to stem the possibility of runaway local transmission.

“Until Italy, Korea and Iran happened, Singapore was the worst outside China,” said Linfa Wang, the director of the emerging infectious diseases program at the Duke-National University of Singapore Medical School. “Why didn’t we feel that way? Because the government is very transparent and because that number means we are so effective in tracing and isolating every case.”

For all the panic erupting elsewhere, most Singaporeans do not wear masks out, because the government has told them it’s not needed for their safety. Most schools are still running, albeit with staggered lunchtimes to avoid big crowds. There is plenty of toilet paper.

As of Tuesday evening, Singapore had 266 confirmed cases. Only a fraction are mysteries, unlinked to recent foreign travel or previously identified local clusters, which include churches and a private dinner.

Nearly 115 patients have been discharged from the hospital. Singapore has recorded no deaths from the coronavirus.

When rumors of a mysterious respiratory virus began circulating in China at the beginning of the year, Singapore moved quickly. It was one of the first countries to ban all travelers from mainland China, starting in late January. Thermal scanners measured the temperatures of all who came into the country.

In a nation of 5.7 million residents, Singapore rapidly developed the capacity to test more than 2,000 people a day for the coronavirus. In Washington State, one of the hardest hit places in the United States, public labs are aiming to process 400 samples a day.

Testing is free in Singapore, as is medical treatment for all locals. Singapore has 140 contact tracers outlining each patient’s case history, along with the police and security services doing the shoe-leather work.

After weeks of investigation and the use of a new antibody test that can detect people who have recovered, health officials were able to tie two church clusters of 33 people to a Lunar New Year dinner attended by members of both congregations. The people who transmitted the disease between the two churches had never shown serious symptoms.

Close contacts of patients are put into mandatory quarantine to stop further contagion. Nearly 5,000 have been isolated. Those who dodge quarantine orders can face criminal charges.

All pneumonia patients in Singapore are tested for coronavirus. So are people who are seriously ill. Positive cases have been identified at the airport, at government clinics and, most frequently, through contact tracing.

Singapore’s epidemic regimen was shaped by the 2003 SARS outbreak, when 33 people died out of 238 confirmed cases. As in Hong Kong, medical workers were among the casualties in Singapore.

“The most important thing is that Hong Kong people have deep memories of the SARS outbreak,” said Kwok Ka-ki, a lawmaker in Hong Kong who is also a doctor. “Every citizen did their part, including wearing masks and washing their hands and taking necessary precautions, such as avoiding crowded places and gatherings.”

The Hong Kong government eventually caught up to the public’s caution. Borders were tightened. Civil servants were ordered to work from home, prompting more companies to follow suit. Schools were closed in January, until at least the end of April.

Taiwan acted even faster. Like Hong Kong and Singapore, Taiwan was linked by direct flights to Wuhan, the Chinese city where the virus is believed to have originated. Taiwan’s national health command center, which was set up after SARS killed 37 people, began ordering screenings of passengers from Wuhan in late December even before Beijing admitted that the coronavirus was spreading between humans.

“Having learned our lesson before from SARS, as soon as the outbreak began, we adopted a whole-of-government approach,” said Joseph Wu, Taiwan’s foreign minister.

By the end of January, Taiwan had suspended flights from China, despite the World Health Organization’s advising against it. The government also embraced big data, integrating its national health insurance database with its immigration and customs information to trace potential cases, said Jason Wang, the director of the Center for Policy, Outcomes and Prevention at Stanford University. When coronavirus cases were discovered on the Diamond Princess cruise ship after a stop in Taiwan, text messages were sent to every mobile phone on the island, listing each restaurant, tourist site and destination that the ship’s passengers had visited during their shore leave.

As of Tuesday, Taiwan had recorded 77 cases of the coronavirus, although critics worry that testing is not widespread enough. Students returned to school in late February.

With new waves of the virus surging across the world, public health officials in the three locales are gearing up for a longer fight.

On Tuesday, the government of Hong Kong, where only 157 cases have been confirmed, announced a mandatory 14-day quarantine for all travelers from abroad beginning later this week.

Taiwan will require self-quarantine for arrivals from 20 countries and three American states.

The city-state has restricted its borders further. Arrivals from Southeast Asia and parts of Europe must now undergo a 14-day self-quarantine.

“The world is only as good as the weakest link,” said Dr. Lee, the head of Singapore’s communicable diseases division. “Diseases do not respect borders.”