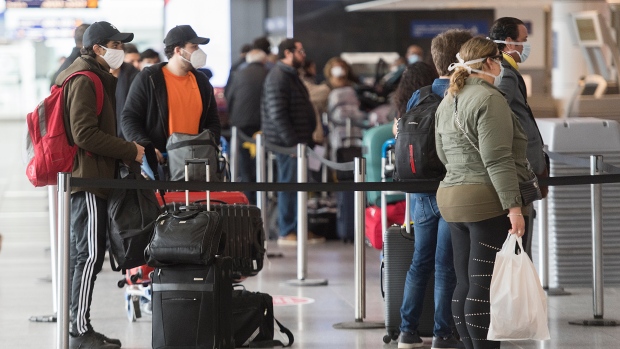 More than two weeks after Canada implemented a rule that incoming airline passengers must show a negative COVID-19 test result before boarding a plane, the country still appears to be seeing some travel-related cases and the federal government is exploring ways to make it harder to go on trips.

As more transmissible variants of the COVID virus emerge across the globe, experts say tightening the leaks around travel becomes even more important, and that the new testing requirements are not likely to catch all cases.

COVID projections from Caroline Colijn, a mathematician and epidemiologist with Simon Fraser University, show a potentially grim picture for the next few months, with a skyrocketing spring wave fuelled by community spread of a more contagious variant.

Colijn says clamping down on travel is her “top recommendation right now.”

“There’s still a good chance that we can prevent — or at least really delay — large numbers of this high-transmission variant coming into Canada,” she said. “And if we can push that peak out to September, we may be able to avert it if most of us are vaccinated by then.”

While Prime Minister Justin Trudeau has said Canadians should cancel all upcoming non-essential trips they may have planned, other options the government is looking at include implementing a mandatory quarantine in hotels for returning travellers.

On Jan. 7, the government implemented a requirement that airline passengers entering Canada must show proof of a negative PCR test that was taken within 72 hours before their flight.

Colijn and other experts are hopeful this rule is catching a large number of positive COVID cases, but the 72-hour window — necessary to ensure people have enough time to get results back — also allows the virus more chances to wiggle through.

In some cases, very small amounts of the virus, which could grow to infectious levels days later, aren’t picked up in testing. Others cases could contract the virus between taking the test and boarding the plane.

Dr. Christopher Mody, the head of the microbiology, immunology and infectious diseases department at the University of Calgary, says PCR tests offer “a snapshot in time,” meaning the result is only valid on the day the test is taken.

A Government of Canada online database that keeps track of possible exposure on domestic and international flights shows that since Jan. 7, hundreds of planes have had at least one passenger on board who tested positive for the virus days after landing, and may have been contagious on their flight.

Dr. Zain Chagla, an associate professor of medicine at McMaster University, says while the negative test requirement is likely helping on a large scale, “it’s gonna miss a few people for sure.”

“Clearly it isn’t a perfect system, but there are also a number of people who have been rejected for flights based on their tests,” he said. “This just isn’t enough to say everyone coming into Canada is completely not infectious at the border.”

Some experts have suggested the use of rapid antigen tests at airports, either right before boarding or right after landing, as a potential way to ensure positive cases aren’t travelling between countries or regions.

Dr. Don Sin, a respirologist and UBC professor who’s co-leading a rapid test pilot project with WestJet at Vancouver International Airport, says rapid testing could offer a measure of insurance — a second step to be used in addition to the PCR negative test requirement.

Rapid antigen tests, which turn results around in 15 minutes, aren’t as sensitive as the PCR nasal swab, Sin says, but they work very well in catching positive cases.

“If you test positive on the antigen test, you’ll test positive with a PCR,” he said. “So I think the public can have confidence in the ability of these tests to accurately pick up those who are infectious.”

Experts say testing can only be part of the strategy to contain the spread of new cases though. The mandatory 14-day quarantine period, which Canada is still implementing, needs to be followed properly.

“We are in a very tenuous time with these variants,” Mody said. “If there is community transmission of the variants, we will be in a very serious situation.”

This report by The Canadian Press was first published Jan. 25, 2021.

A previous version erroneously reported that travellers flying from city to city within Canada must show a negative COVID-19 test. In fact, the requirement is for air travellers coming from international destinations.